Long title, I know, but this issue Is quite annoying.

When using "search in playlist" or "filter" to look for a specific song, lets say a song that has the word "hey" in it, you get a reduced list of only the songs that have "hey" in them, lets say there are three in the entire playlist. You press play on the song you were looking for and exit "filter", however only the three songs that had "hey" in them play, on repeat (I have repeat selected), and not the entire playlist. Its like an entirely new playlist with only those three songs is created.

I tried deleting and reinstalling Spotify and that seemed to help for a couple of hours, but now the issue is back. Is there anything else that can be done? (this is for desktop versin on Mac btw)

We've heard back from the teams looking into this who have confirmed that filtering a playlist will now only play the songs from the filtered result and not the entire playlist.

Keep in mind though that we're always working on improving the app. Make sure to enable automatic updates so you don't miss the latest improvements and fixes coming your way!

Hope this is helpful but don't hesitate to give us a shout if there's anything else - we'll be happy to take a look.

Have a lovely day!

Thank you for reaching out to us here in the Community. We're happy to help.

Can you perform a clean reinstall of the app? This will make sure there's no old cache files causing this.

If that doesn't do the trick, can you provide us a screen recording? This will help us understand what's going on directly from your end.

Thank you for your reply!

I tried to do a clean reinstall but the problem remained. I have a screen recording of the problem but the file exceeds the file size limit, is there anywhere else I can post the file?

Thank you for your reply and for the troubleshooting you've done so far.

Here is the link to the video:

(there is no sound but I hope thats ok)

As you can see only the songs that come up in the search will play, even after I remove the word I searched from the search bar, as if they were the only songs in the entire playlist and not just the ones that showed up on the search. If I exit the search and double tap to play the playlist from the sidebar the playlist plays like normal.

Thank you again for your help!

Thank you for your reply and for the video.

This does seem odd. We've passed along this to the right team that will investigate this further.

Could you also make sure to provide us with the following info, if you haven’t already:

I don't understand. Why don't you add the song you're looking for from the search result list to your own playlist, and then play the song in your playlist?

Just commenting to say I am also experiencing this issue as of the last 24 hours. Searching for a song via CTRL+F, play a song in the list of results, and it makes your Queue out of **only** the songs visible in the search results. It seems like the Queue is not properly pulling the full Playlist. Desktop user on Windows 10.

Yeah, I have the same issue now. A clean reinstall didn't do anything to change that and it's been that way for about 2 weeks now. This is atrocious and ruins the whole listening experience, it's honestly so frustrating.

Especially knowing the fact that there aren't a lot of posts about it, meaning that spotify probably won't pay it much mind... 😞

UPDATE / SOLUTION (kinda): I went and reinstalled the past version of spotify  [snip - Moderator edit] from the 25th january 2021 and the issue is gone. It looks like this is something introduced with the newest / current version of spotify, I am 100 % certain on this since I reinstalled the current version multiple times and the issue always persisted, whereas I couldn't recreate it with the older version no matter how often I tried.

You can download older version on this site: [snip - Moderator edit]

We've heard back from the teams looking into this who have confirmed that filtering a playlist will now only play the songs from the filtered result and not the entire playlist.

Keep in mind though that we're always working on improving the app. Make sure to enable automatic updates so you don't miss the latest improvements and fixes coming your way!

Hope this is helpful but don't hesitate to give us a shout if there's anything else - we'll be happy to take a look.

Have a lovely day!

XeniaModerator
Help others find this answer and click "Accept as Solution".
If you appreciate my answer, maybe give me a Like.
Are you new to the Community? Take a moment to introduce yourself!
Reply
1 Like

Ok, so I just wrote a whole book about how I found the way this was implemented highly questionable, and what I'd suggest. But I accidentally closed my firefox by hitting a fat finger shortcut, so I'll do it again but probably not as nicely articulated:

Many ppl, especially ones who use playlists with many many songs, will have grown accustomed or even dependend on the way the search feature used to work. Wanting to start a playlist with a certain playlist, which seems like a reasonably common thing to do, becomes close to impossible with playlists of certain sizes now. Instead you're there's now a feature forced onto you, that makes a process you could previously already achieve (ctrl + a after searching for your keyword), more convenient. Which seems fair in itself, but the fact that it wipes the other feature that is arguibly more intuitive away completely, for a feature that lets you play ONLY songs with a certain keyword (what an odd usecase to begin with).

I really get that you'd want this feature in your service, as a quality of life improvement, but the fact that it's a silent replacement and not an option blows my mind. All I need is an option I can tick to do playlist searches the way I used to be able to and I'll be happy.

Until then I'll only be able to use outdated spotify version, as the newer ones actively disrupt my listening experience, as minor as that feature replacement may seem. 😞

The "expected behavior" should be to have the playlist only play the songs from the filtered results and not the entire playlist, ONLY as long as the search / filter keyword is still there, and NOT after the keyword has been removed ! Do we all agree on this or not ?

Here is my post from a few weeks ago. This is a BUG and not a feature: 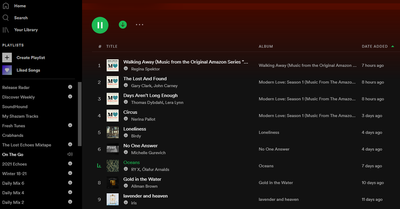 * Filter down to a single song, initiate playback of that song (but within the playlist)

* Remove filter
I have removed the filter 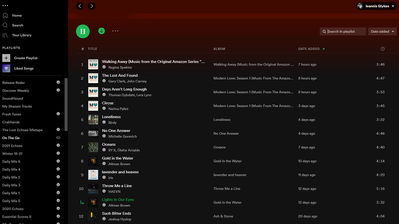 * You're now playing through the original playlist, but with playback having moved to the filtered track

Here is the Queue screen. Although I have removed the filter in the the previous step, the Queue still keeps that filter looking for songs titles / artists with the word "lights".

*I think the behaviour you're describing isn't connected to the UI, and is present in older versions of Desktop too. Could you describe your desired behaviour here?
I do not remember this behavior with the older UI versions. I actually remember that in the recent past, the filter + queue had a different BUT still buggy behavior which was the polar opposite of the current bug (meaning:  it did not play ONLY the filtered titles / artists, it would only work once and then play other random songs).  You can find a lot of posts with THAT bug. Example: https://community.spotify.com/t5/Desktop-Windows/playlist-filter-isn-t-working-properly/td-p/4742256

Either way, acknowledging that this is indeed a BUG is fine, but saying that it's an old and unfixed bug (which, again, as I described above it's not the same bug) is not really ...comforting, don't you agree ?  What has happened here is that in the recent past we had the bug of the filter not working (and not keeping the queue ONLY with the filtered songs / artists), and with the new behavior we have the exact opposite: The filter works by creating a right working queue, but when / if we remove the filter the queue does not reset and keeps being stuck with the filtered words.

The queue should not work this way. It should "listen" to the filter we set and remove.
When we set a filter the Queue should behave accordingly and play only songs with this filter.
When we remove the filter, the Queue should also be reset and revert to random songs or whatever other setting you have for that specific playlist (random, repeat, etc).

This is a terrible feature. Please find a way to have setting this removed OR the ability to turn it off. I hate having to select a song and then only hear that song from the playlist. I want to hear the other songs to too. If that was the case I’d just go to the general search bar and search for the song there. I save searched and played it IN THE playlist because I want to hear that song as well as others IN THE playlist.

I found this thread because I was trying to get this problem people were having to actually work like that. I have a big playlist where I have the best songs from certain artists and sometimes I want to listen to only a single artist from the playlist I created. This problem people were having seems like the perfect answer, but couldn't find a way for it to work like that.

If there was a "add search results to queue/playlist" that would be good enough. Anyone know if this is possible somehow?