Installed via flatpak, on latest version with hash:

Also replicated with the web player on Firefox 88.

Windows 10 is refusing to resize after a certain height, unsure if this is new or old behavior.

Previously, Spotify could be resized until only the music controls showed. Making it very convenient to leave open and still music.

Spotify resizes in such a way that the music controls disappear first.

I expect this is a change in the web version of things, as rolling back the flatpak version didn't return it to the expected old behavior.

Could you confirm if you still observe this behavior after running a clean reinstall of Spotify on your device? This will get you the latest app version and remove corrupted cache that could be causing the issue.

If you see no difference after the clean reinstall, check your hosts file for entries that need to be deleted. Follow the steps described here on how you can do that.

After uninstalling and verifying that all Spotify related files are purged from my system, I installed it again and the issue still persist.

My `/etc/hosts` does not include any entries related to Spotify or Fastly.

To make my issue more clean I have attached spotify_new.png and spotify_expected.png.

spotify_new.png resized more on the horizontal axis to hide the social pane. 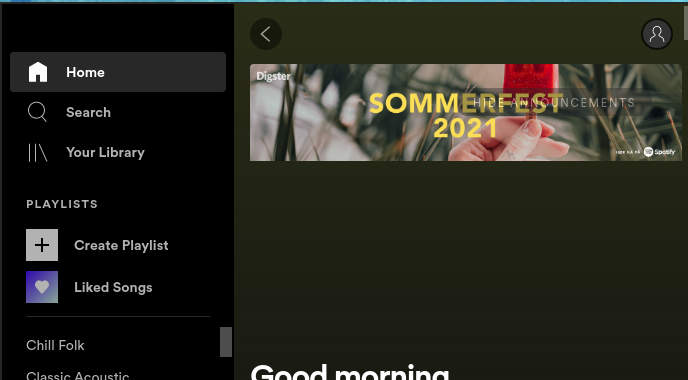 Next thing we can try is checking if the issue might be related to your Spotify account or the specific setup of your device.

First off, try logging in to a different Spotify account on your device to see if it's an account-related issue. You can borrow the login details from a friend or relative, or simply create a free test account in order to try this. If it works with another account, you can follow the steps in this Spotify Answer next.

If you observe this across multiple Spotify accounts, try logging in to your account on another device and check if you experience the same. If it doesn't occur on a different device, we'd suggest making sure that your original device is up-to-speed with any software updates available.

Hope this helps. Keep us in the loop here.

This is replicatable across Fedora 34 and OpenSUSE tumbleweed, both using flatpak version of the software, and both being fully up to date. This is however fully expected as flatpak ensures the package is installed and setup identically on any machine that uses it, regardless of system configuration. The problem is also replicable using the webplayer inside FireFox 88.

I do not have the chance to test with another account, it is however not an isolated incident as other people I have talked to can also replicate this unexpected behavior.

We don't offer official support for Linux, but you can find help and share your suggestions to fellow Linux users here.

On Windows and Mac, the app now has a default minimum size that cannot be exceeded in order to hide parts of it and elements are dynamically resized and hidden based on size. At all times, a resizeable left sidebar, main window and playback controls will be present.

For now, if they're supported/available in your Linux distro, you can try the settings Show desktop notification when the song changes and/or Show desktop overlay when using media keys.

Hope this clears things up. If you have any questions, just let us know.