[WP10] Unable to detect device or sync from desktop to phone

[WP10] Unable to detect device or sync from desktop to phone

I seem to be having a bit of an issue. Well, lots of little ones really. Partially the desktop client, but also the mobile one too.

There was a particular album which was in my collection back last year, however a few months ago Sony Music UK went crazy and removed it, all except for one track. Since then I have been playing locally on my pc, however with the lack of direct local file support for Windows smartphones, I'd started to become a little sick of having to open the Groove app every time I wanted to play it, considering everything else is on Spotify.

Recently I came across something online that mentioned syncing local files then adding to a playlist on the desktop client, then setting to offline mode on both to force a download of the local files. All seems to be ok on the desktop side, except one thing - whilst the tracks are linked (I've seen there is a URI link for every offline file of the album which matches the online list), when going onto the artist page the tracks are still greyed out, however double clicking them seems to play them okay. Strange.

Anyway, I tried the syncing thing, and it doesn't seem to work. The phone isn't coming up in "devices available" at the bottom. I have connected it to the same wifi network, as well as enabled "Download over 2G/3G" in the settings with no luck. I have cleared all the offline devices from my account preferences page, cleared the cache data in the appdata folder, I have turned off the Windows firewall completely, and even tried connecting the phone via USB. If I keep the playlist list (not the playlist itself) on screen on the phone, there is an icon next to the track number. When I add files to the playlist on the computer, the track count on the phone goes up as I add them.

I have also reinstalled spotify on both phone and computer with no luck at all. All tracks are labelled correctly and linked to the library however they are greyed out on the artist page, still. The format of the files are mp3 320Kbps ABR.

The album in question is Farm Out by Rednex. (I know, don't judge me, they're catchy haha!). The only track which is available is listed as "The Way I Mate - Single Version", and is only available to GB and IE (If you search in other countries, that will be blanked out too, in case you tried checking yourselves). Is there any way I can get this album within Spotify on my phone, by forcing offline playlist or something similar? Is it possible to play offline playlist-synced local files from desktop to another device if the track is restricted from streaming in the first place? Is there any reason why the phone isn't appearing on the available devices list? (I am able to ping my phone from the computer via a command prompt, so the connection is there).

The other problem with showing them as available and not greyed out on the PC would be a nice bonus.

Any help will be thankfully received! 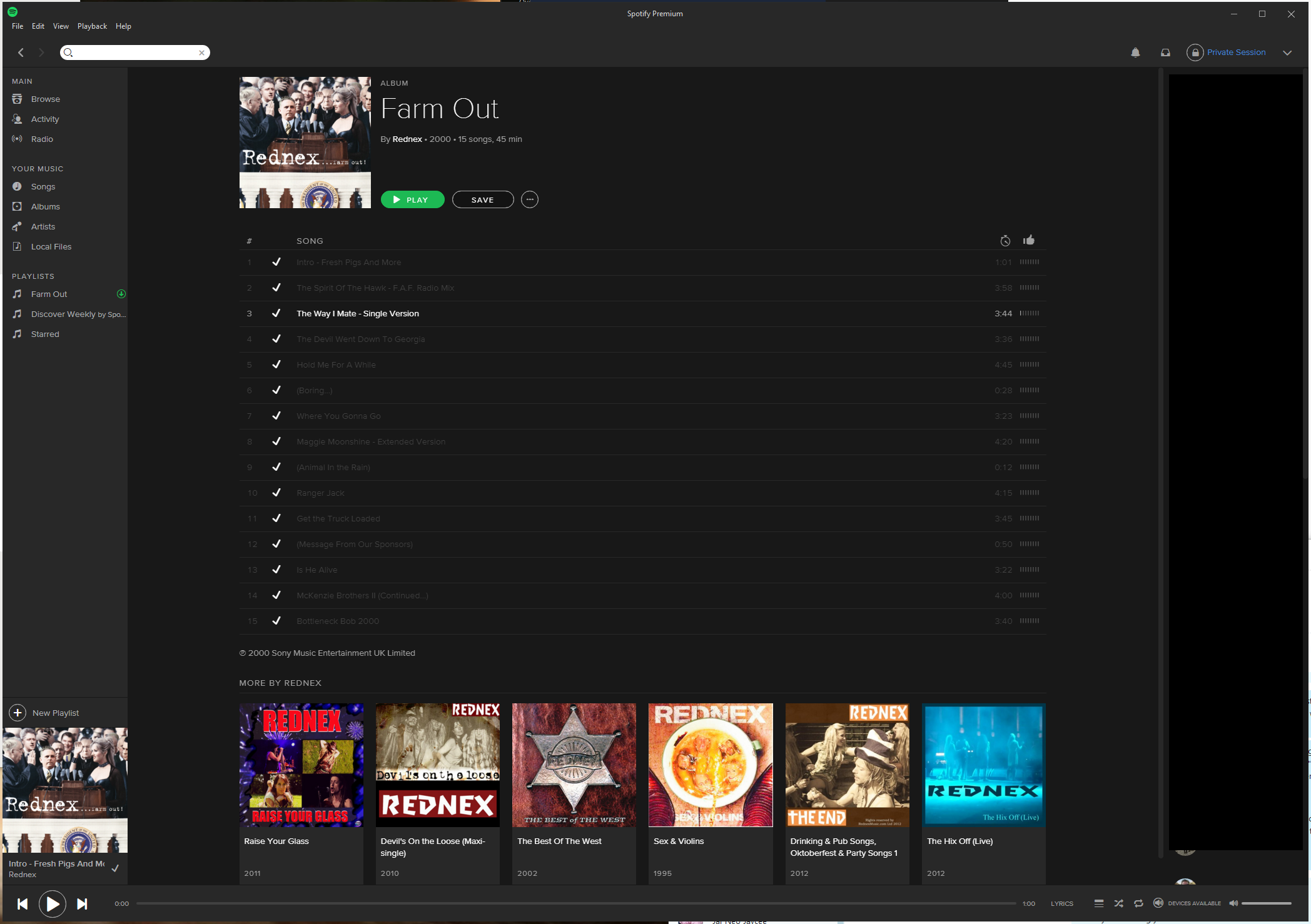