I thought Spotify Premium was meant to be ad free

I thought Spotify Premium was meant to be ad free

So correct me if I'm wrong, but the major selling point of Spotify premium is that it's ad-free. Despite that, when I open the app on my phone, I ocassionally get a full screen advertisement for nonsense that I'm not even remotely interested in. I've been through my settings and verified that all notification settings are disabled. Why do I still have ads when I pay $15 a month to not have them? Am I supposed to believe that this isn't an advertisement? 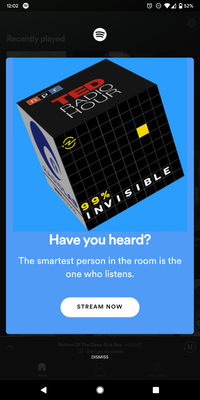 Not only am I annoyed to see something like this as soon as I open the app, it's even an ad that implies I'm not smart if I don't listen to it. Well played. Honestly, if I see this trend continue, I'm likely to cancel my subscription.

Re: I thought Spotify Premium was meant to be ad free

I've also recieved these full-screen advertisements while paying for Premium! I reccomend you escalate through the support chat to email, where they still don't care (this makes them money, after all) but will at least hear the issue out.

I had the same type of ad you show in your screenshot, and now I'm getting ads built in to the top of the Home tab in the app. They promote new albums from artists I'd never listen to. In support chat the agent even mentioned the artist made no sense as a suggestion in my account. Support chat has even blamed these advertisements on a "phone virus" and made me reinstall the app.

Unfortunately, Spotify has apparently made the decision to put these ads in the Premium service and call it a feature. These obviously financially motivated advertisements are "suggestions" in Spotify's language.

I am in the process of cancelling my account over the issue. I told them last time "I will cancell if you show me advertisements again" and now they're acting all surprised that I'm cancelling over it now that there's a new one.