The Netflix advertise a Full HD 1080p quality. The picture quality of Netflix HD streaming is nowhere near as good as Blu-Ray - in fact it's a little bit better than DVD. The reason is that the bitrate of Blu-Ray is roughly 10x that of Netflix HD and that Blu-Ray is full 1080 HD. Whereas Netflix HD is only compressed 1080p. It's easy to spot this difference; pause a HD stream and look at all the patchy colors and pixelation. Now do the same with a Blu-Ray disc...

The current infrastructure of Internet simply could not cope with the amount of data needed to stream real Full HD at Blu-Ray standard and Netflix themselves have admitted that they format need only 5 Mbps Internet connection. So let's say the quality is highly compressed, because real Full HD would need at least 10 Mbps or more.

The "HD" in Netflix just means the video is either 720 or 1080 resolution and compressed highly... that's all. It doesn't matter that it is 720 or 1080 poor quality data. I think the term "HD" should be used more strictly.

Now, don't get me wrong, I absolutely love Netflix HD streaming - I use it all the time with Spotify. For most things the quality is perfectly acceptable for me and my 22" pc screen. Very nice, actually. However, if you want the best possible picture quality then you have to use Blu-Ray. This becomes more important the bigger your screen is, for example on a 40" plus screen I would imagine the difference is very noticeable.

Folks, what you think about Netflix HD?

Any time I've used it, Netflix works on a sliding scale for quality depending on the quality of your connection. If it's peak time, you might get a lower quality then in the middle of the night. Streaming a movie over a 5Mbps connection would not be as high a quality as a high capacity optical media that can store 50Gb of data. Always looked great to me.

In terms of the use of "HD", this is only going to become more complicated when 2K / 4K displays become more readily available. What would these be called for shorthand? Super HD? Will 4K displays be "Super Full HD" while 2K are "Super HD Ready"?

I am always dissappointed with the quality I can stream from netflix and lovefilm, so much so I cancelled my lovefilm account. At home I have 80mbps fiber so it works fine, but here at university we struggle to get 12mbps at off-peak, and maybe 5-6mbps at peak times, the viewing is just not quite a fantastic experience.

I know this will improve as bandwidth does, but still being in the welsh countryside it might take a while! Now I just order blu-rays from amazon UK with prime delivery. Sure it costs a bit more, but the quality is definitely better for me anyways!

I agree this, but for big screens this is not good HD, because those new Full HD TV's looks better when real HD.

However with my PC (I do not have any TV's) the 22 screen is just good and Netflix Full HD looks great. However this is not real HD, but it's fine to me with my currently setup.

The problem is, as I said, when user watch Netflix from big screen.

They output the films in HD resolution, 1080p is full HD . Any issue you have are down the internet frame work not being fast enough to handle that much information.

The HD isn't HD when you use a big screen. But for that price quality is good.

Full HD only means a 1920x1080 image, it has nothing to do with the actual visible quality or how accurate that picture represents the original uncompressed image.

So yes, Full HD can look like SD if encoded poorly or at low bitrates, right up to awesome such as Blurays.  However they are all still "technically" Full HD.

Streaming 30Mbit for Bluray quality would be very impractical as the file sizes on Netflix servers would not only be huge, but also getting those streaming moving reliably across the Internet would be hard.   This is why its so useful for Netflix to adopt Open Connect, as it moves the content to your ISP or dedicated pipes connected to Netflix servers, so it doesn't clog up the Internet.

However I also suspect that the contracts with the studios will determine the quality, as if it was just as good as Bluray then why would you bother buying them?  As it is right now, if you like something enough its still worth getting it on Bluray for the better picture and sound quality.

For the most part Netflix gives the illusion of a decent 1080p image from a normal viewing distance, sometimes better and sometimes worse than sattelite/cable.  That is perfectly fine as far as I am concerned.  Although if you are watching on a PC from a normal PC viewing distance, I can understand why you would be noticing the quality loss - its really not intended for viewing that close.

Its also worth noting that all evidence seems to suggest the Xbox 360 Netflix only supports up to 720p, the PS3 version is generally the best and with the latest update it now FINALLY tells you which resolution you are currently streaming.

Hate to break this to you, but Netflix HD runs about 7Mbps (and really does run the full 1080p - bitrate/compression has no bearing on the title Full HD) and blu-ray discs typically run in the 20's, with the super high profile movies being in the high 30's.  I agree it does not look as good as a Blu-ray, but compared to other services out there that run on the Internet it looks, and sounds (with the DD+ 5.1) pretty darn good.

(edit) On the PS3 note: their most recent update to the Netflix app screwed up the resolution report when you hit the select button.  It's now mangled with other information so you can't read it.

I purchased 42" Philips Smart-TV with Ambilight nd Netflix Super HD is awesome. It's compressed to near 8 Mbps, but it looks clear. 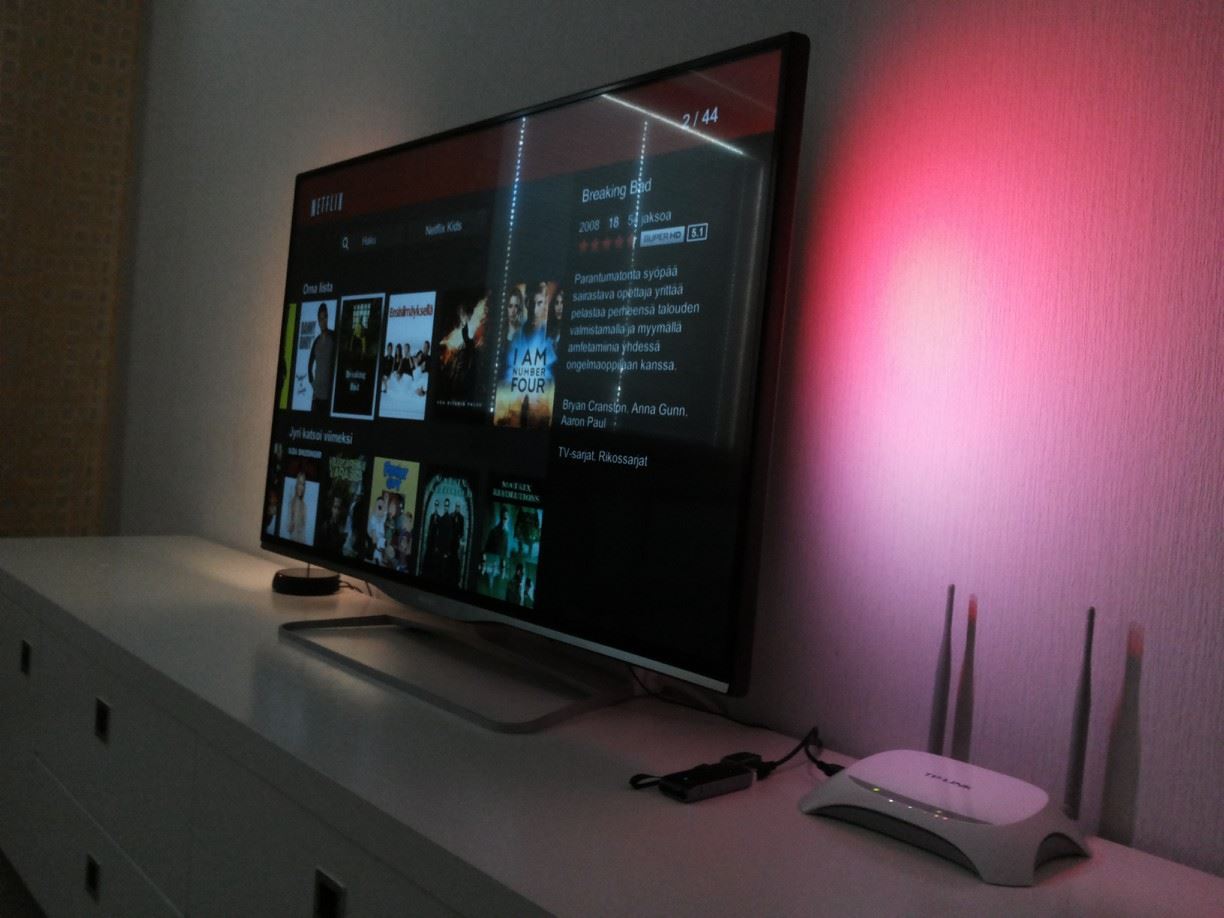 8 € is like 2-3 rent movies or one ticket to movie theatre, but only you can watch all content from Netflix! Here's my movie setup 😉