Hi, this is a feature idea I came up with that I really think you should add 😄

Because you can't play multiple playlists at once you should be able to sort songs and almost make "folders" inside a playlist so you can separate the playlist into different parts. This will allow for you to play the entire playlist but also choose which songs you want to play inside the playlist without much effort. Imagine this, you have your favorite playlist and inside you have" folders" that you can check or uncheck, maybe one "folder" with older songs, one with newer and maybe that's the one you want to listen to. Maybe you also want to include some K-POP though, then you can play those separate parts (Newer and K-POP) but without the trouble of having to individually select every song and put them into the queue. Of course you should be able to directly throw these so called "folders" into the queue because why the heck not. I tried to explain it as best as possible and will implement this nice paint picture 🙂 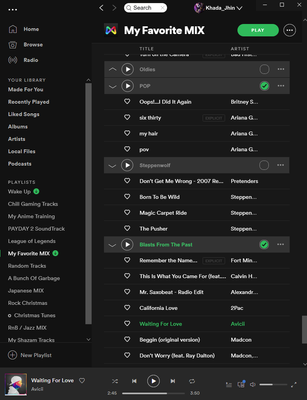 ( The small arrows are there to expand and contract the different "Folders" so you can scroll though your playlist without it taking five years even if you have added a lot of songs, and of course you will be able to drag and drop songs to and from "folders" )