Really excited about the new Blend playlist beta, however I noticed an error with some of the music that it's including in the blend between me and my friend.  It added a number of songs to the playlist that are songs I use in my "Sleep Scores" playlist, however I only ever exclusively listen to that specific playlist on a "Private Session" as to not mess with my listening data.  I never see these songs in any other of the "Made For You" Spotify-generated playlists I listen to (like my Daily Drive, or my mixes; and my Release Radar/Discover Weekly playlists never recommend songs related to the songs in my Sleep Scores playlist).

Therefore, it looks to me like the Blend playlist might be pulling in data from the Private Sessions, which I don't think it's supposed to be doing.  I know this feature is still in Beta which is why I wanted to provide this feedback so your team can investigate as you work on this feature.  Happy to share any additional information about this.

Thanks for reaching out about this in the Community and for sharing your troubleshooting!

We've passed this info on to the relevant team at Spotify 🙂

Since the feature is still in beta testing there will be further development until the official release.

Don't hesitate to reach out again if you have questions.

AlexModerator
Help others find this answer and click "Accept as Solution".
If you appreciate my answer, maybe give me a Like.
“With freedom, flowers, books, and the moon, who could not be perfectly happy?” ― Oscar Wilde
Reply
1 Like

I just wanted a bit more information on the new Spotify Blends that came out for Spotify. I really like this new feature and I think Spotify has done a really good job with it 🙂

However, I have a really wide taste in music and I listen to Bollywood music which I know my friends will not like. I notice that a lot of Bollywood music appeared in my Spotify Blends even though I have other music in common with my friends that could appear instead. I wanted to know if there is a way to remove a song from a Blend so that both of us will not see it in our Blends anymore?

In the mobile version, I 'hid' the song in all of the playlists but that only worked to hide the song from my own playlist. I noticed that after hiding the song, one of my blends updated to remove the songs that I hid and replaced it with songs that were not in the same genre. I liked this feature where it's basically learning from my feedback but I noticed that only 1/3 of my Blends did this and I would like this to happen to all of them. Is there a way to trigger this update? Also, can I be assured that if I hide Bollywood songs from the Blend, then it will prevent songs of that genre from appearing again in the Blend?

The blend feature is really cool one and I loved trying it out... but I have something to say on the similar lines... There are a lot of music which maybe personal for me or I'd not like to share them on my blend... as such, giving the user a choice to maybe remove those songs or something similar would be really nice... looking forward to the future updates 🙂

When looking at the playlist on the desktop app, you can't see which user profile the song came from, whereas in the mobile app it shows the user's pictures beside the song so you know which user the song related to. Pics uploaded for reference. Also would love the ability to change the playlist cover photo to personalize it! 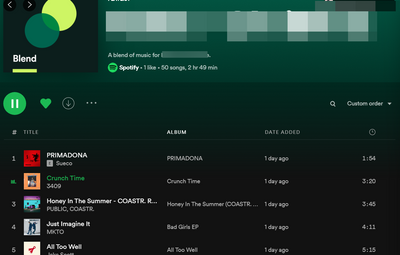 Thank you for your posts here in the Community 🙂

There's currently no integration in Blends to remove songs, see which user the songs come from and to change the cover photo, but this is useful feedback and we'll make sure to pass it along.

we've passed on this bit of feedback as well. Thanks for reaching out and sharing your thoughts on this Beta feature! We'll be using all this feedback to make Blend better over time 🙂

I also love the Blend feature but I wish it updated more often. The majority of the songs are the same even after it "updates" daily. I definitely agree with other users regarding maybe having an option to remove or hide songs from the playlist. Otherwise, I'd just love to see it update more often with different songs, not the same ones daily.

Real user experience with features in testing is very valuable, as it helps the developers make them even better 🙂

Thank you for taking the time to share this with the community.