HiFi - Lossless - where are you

Just signed up for Qobuz.  Interface and sound quality are great!

This question has been voted for since 2014 in a lot of different threads - no action from Spotify whatsever - if you want lossless leave spotify will probably never ever happen. I currently have both services Tidal and Spotify for family reasons but will probably stop Spotify or even move to Qubos instead.

Using Tidal HIFI atm. I will come back for Spotify HIFI and i will gladly pay 20+ dollar a month for it

Bummer, maybe Spotify doesn't care to provide what some of their customers want still thinking its a small segment of business. Two years ago, maybe, now days, Tidal and others seem to be slowly picking up that business. Spoke to several collegues at work and local audio circles again, and many fading fast off Spotify. That' s too bad.

I read back through several replies realizing over the past five years many folks have tried to talk Spotify into doing something customers want.  Thanks to all who tried before.  Nice product and forum yet it does no good if nobody in marketing and product management is listening and escalating this to the bean counters and decision makers at Spotify.  Zzzzzzz. Zzzzzzzz. Asleep at the wheel.

Friends, do not linger with Spotify.

Today Tidal has changed a lot. The new interface is great and I do not see what is missing from the others. Mix playlist is great and often accurate to my taste.

On Iphone or Android, applications have changed too. I find them fluid and very well done by rapoort to before.
The MQA sound available on computer and Android is very very good. I tested "Deezer Hifi" and "Qobuz Studio" on my dac "Ifi Audio". I prefer the sound of Tidal in MQA to the sound of Qobuz in real 24 bits.
Besides, many people say it.

On my Dac Onkio DP-X1, Tidal has done wonders since Tidal is MQA compatible on Android.

Okay, there is a lack of search for favorite albums, playlists and titles. But I think it will come.

The organization of the new interface is much more logical than that of Spotify. We find everything quickly.
I recently read that Tidal relies on humans and an algorithm to offer listening choices. Honestly, it's perfect. I prefer fewer proposals but proposals that are right. On Spotify, there are tons of proposals but often we listen to a song and we move to another record because it does not really correspond to our taste.

It's been a month that I take advantage of Tidal Hifi offer at 1.99 euro for 3 months. I switched my playlists from Spotify to Tidal very easily with Songster on Iphone. By cons, albums, I added them manually. Just like my favorite artists.
Now it's just fun with Tidal.

I do not think they block 1000 titles per playlist. I think it's a lot more.

I advise you to try Tidal during the promotion. But really try it for a month by flipping your playlists for the algorithm to know you.

And after that, I would be surprised if you return to Spotify if the quality of the sound is important to you.
I'm not saying that I will not be going back to Spotify someday. But in any case not now.I find that Spotify does not care about its paying users.

And even if Spotify released a HiFi version, I would not subscribe.Now I want a 24-bit stremaing service that has the best sound possible.

Week 7 - Ok let's be onest this week was the week in Las Vegas (CES). So I can understand that it was a busy time. I heard that Spotify will be in every car so that is promising. But wat about Lossless music like all the others. Come on SPOTIFY give us an update now it is the time for it after CES.

What is the magic VOTE number?

IMHO: I do NOT want MQA and do not like MQA.  Listening closely the artifacts of how it sounds after it's been through its compression and decompression algorythyms strips away the good stuff....  MQA is not musical to my ears.

It's possible Spotify is thinking they need to offer MQA or something like it to save $ and while that makes sense, there are several of us out here who'll pay more for Lossless like we do with Tidal today. Right now I'm running both providers and comparing back and forth with several friends with varying high end systems with some of the better DACs offered today.

Losless FLAC on Tidal sounds great.  That's all we want or need.

Problem is, Spotify does not offer it likely due to loss in profit I'm guessing.  Problem is Spotify employees don't use their own online support forum to communicate back to their customer base often enough to make it a trusted source for support information.

OH WELL. WE ALL TRIED our BEST.    Thanks to all for bonding together trying to get Spotify to respond with an update.

Now Let's all go meet over at Tidal and online forums that support Tidal instead. 🙂

What can i say about 24-bit streaming... To be honest, how many of your favourite bands have a 24bit-quality albums? Ok, if you are a really big fan of classical or jazz music, this number can be big enough, but the other way if you love rock, indie, metal, ethnic and other music styles there is no hi-res records and even cd-quality albums have often mastered really far from perfect. And one more thing. In my opinion, hi-res is more suitable for home systems, but on-the-go to work or in subway we don't really need this quality, even with good hi-fi player and iems. 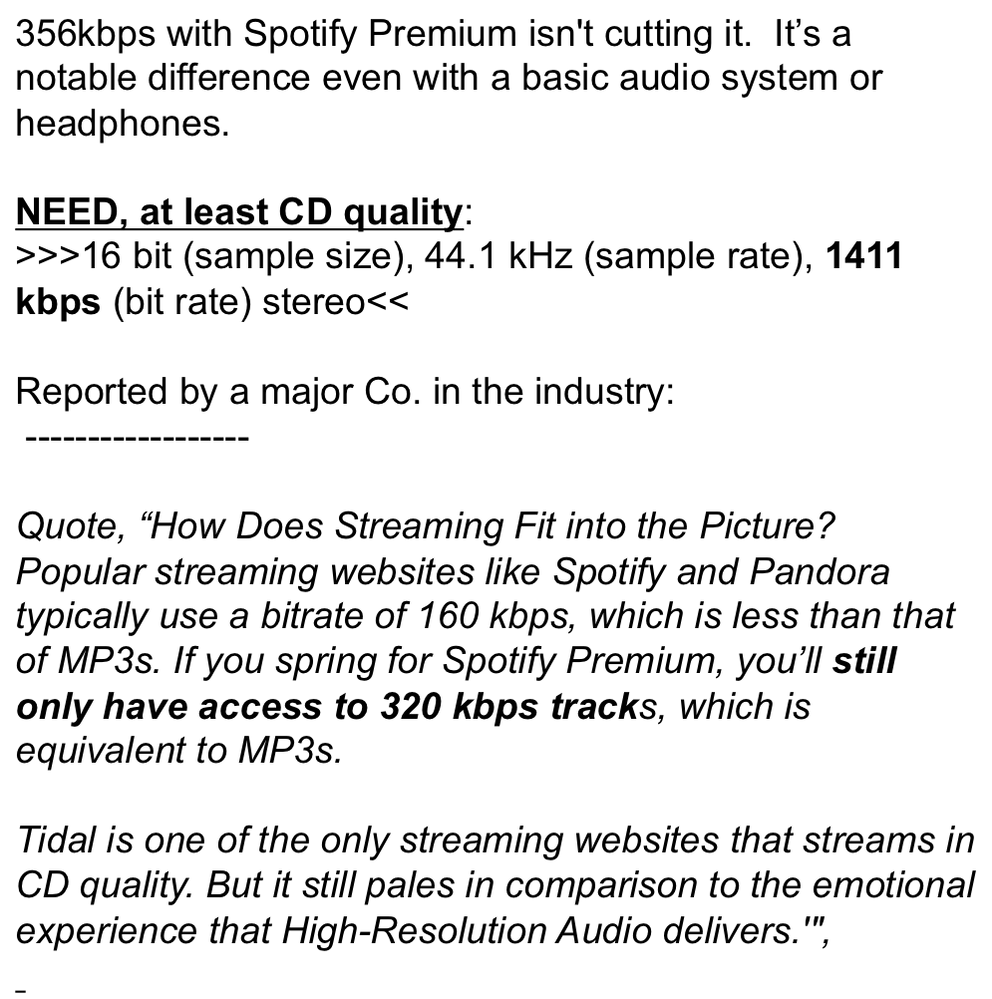