I have this issue on both the web player and the computer download. When I go to my liked songs, I sometimes get an error message where the songs wont load, or as of this past week I have been getting completely blank songs. I have uninstalled and reinstalled the app, logged in and out, restarted my computer, I don't need to reset anything to default software because everything is default. This happens often but it won't go away. I have tried everything! Please help! This doesn't happen on my phone but often on my chromebook! 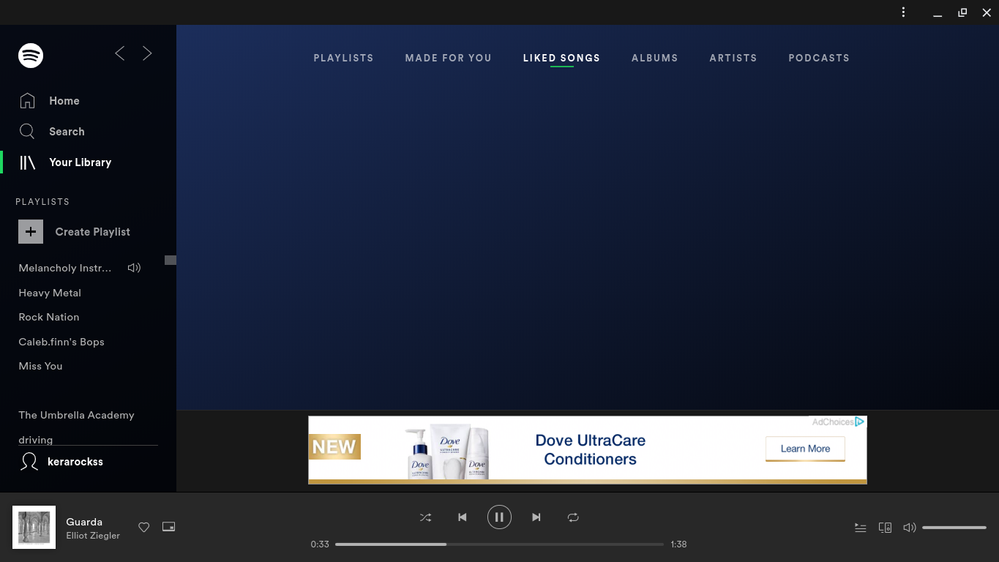 I was able to correct the issue!!! In the bottom of the advanced settings I flipped this setting on:

Could it be that you have a second account you are logging into by accident? Take a look at this article which helps you find any additional account you might have.

Hope it helps. Let us know how it goes!

kerarockss
Regular
I know for sure that I don’t have a second account and just to make sure I went through the steps you gave me. I only have one account.

But what’s weird is that I have it in android and on my chrome book and on my phone I have everything there. My chrome book I don’t. I even undownloaded and redownloaded it as well as logged out and in and I think everything is at its default.
Reply
0 Likes

Does this happen to your Liked Songs only? Or are the Albums and Artist section empty as well?

Have you tried clearing cache and cookies as well?

Looking forward to your reply.

I have the same issue but only on the WEB PLAYER  (but I assume the Chrome OS desktop client is the same as the web player). I can see my playlists, I can play songs etc. but the "Liked songs" tab is suddenly always empty. I think albums and artists were also empty!

For me everything was fine until I reloaded using "Ctrl+R". I deleted the application cache using the developer tools (F12->"Application"->"Clear storage"->Check all->"Clear site data"). I also removed Spotify from the Chrome apps, used the incognito mode plus another browser (Edge) and restarted the PC - all without success.

The Windows desktop client still works but I wanted to switch to the web app cause the scrolling is laggy on the desktop client (with and without hardware acceleration). I should probably create an extra issue for this, cause it seems like the old desktop UI is much less performant (at least on high DPI screens) than the modern web player UI.

I just changed the IP using a VPN (cause I currently have a static IP). Now I can see the tracks again. Seems like the server refused to serve the liked playlist to my own IP. Oddly enough it now works even when I switch back to my normal IP. My normal IP is Swiss and my VPN has a German one.

Has there been any investigation or update for this issue? I'm experiencing the same thing. Mobile works as expected but the web app doesn't display my liked songs. Everything else appears to work fine except for liked songs.

I've cleared cache, logged out and back in, uninstalled and reinstalled the app, restarted my computer all with no luck. I don't have a second account that I could be logged into.

Since you mention that the mobile app works with no issues, it sounds like this might be device-related.

If you're using any ad-blockers or host-modifying extensions on your Chromebook browser, could you try disabling them for a bit and restarting your browser to see if that helps?

It'd be a good idea to try using Spotify Connect when listening from the mobile app to play from the Web Player to see if that shakes things up.

Glad to hear this was resolved and thanks for sharing this here in the Community!

If you come across similar issues in the future, you can also try using a different internet connection or performing a DNS flush to see if that does the trick. Here's how you can do a DNS flush:

Hope this is useful but don't hesitate to give us a shout if there's anything else we can help with!

Thanks for replying! Sorry if I didn't clarify I am using the desktop app on a macbook. I cleared the cache files on my local machine and uninstalled and reinstalled the app with no luck. My songs do show up on the web app (I can use that for the time being), but is there any other option for the desktop app?

Also how do I use the Spotify Connect to shake things up?

Thanks for clarifying that!

Since this is happening on the desktop app, you can also checking your host files with the steps listed in this Spotify Answer.

Further, it's also a good idea making sure that the Spotify app is set as an exception for any firewall or antivirus programs.

If these don't do the trick, it'd be helpful if you could let us know the exact version of the Spotify app so we can take a closer look.

Let us know how it goes! We'll be right here if you need more help.

KaterinaModerator
Help others find this answer and click "Accept as Solution".
If you appreciate my answer, maybe give me a Like.
"Kindness is the language which the deaf can hear and the blind can see." - Mark Twain
Reply
0 Likes
SUGGESTED POSTS
Log In