I hope you don't mind us replying in English.

Just to confirm, was your Spotify account recently created, or have you been using it for a while already?

Also, if you're listening to Spotify using a Private Session only, it could cause this section to not show up.

“Music acts like a magic key, to which the most tightly closed heart opens.”
― Maria Augusta von Trapp
Reply
1 Like

This one's for you and the rest of your staff/team..... What's with the silence???

It's great that you've helped out this guy with his simple issue. Good on you! BUT, within this very same forum, all around you, there are users that have been screaming out for service for MONTHS now and you (nor ANYONE from your 'team') have had the COMMON DECENCY  to acknowledge our posts regarding the Spotify app on IOS not being able to list all the devices which SHOULD be listed.
Any other software (including some that are FREE) have been able to take on the technical issues and succeed in what Spotify has a clear failure.
How about some service!? How about showing your users some respect!?
The coarseness of this comment is only as a result of the months of attempts on a weekly basis from many of us after being completely ignored!
Naturally, we will not expect you to reply, nor anyone from your team - that would break the status quo!  😉

I have this account since five years ago, as premium since last year.

Several friends of myne can’t see recently played artists in other accounts either.

Thanks for getting back to us!

Just to confirm, does this happen if you or your friends use a different device? A screenshot of what you see on your end would really help.

@AussieRo, I understand your frustration. Do you have the link to the posts you're referring to? We'll gladly take a look.

“Music acts like a magic key, to which the most tightly closed heart opens.”
― Maria Augusta von Trapp
Reply
0 Likes 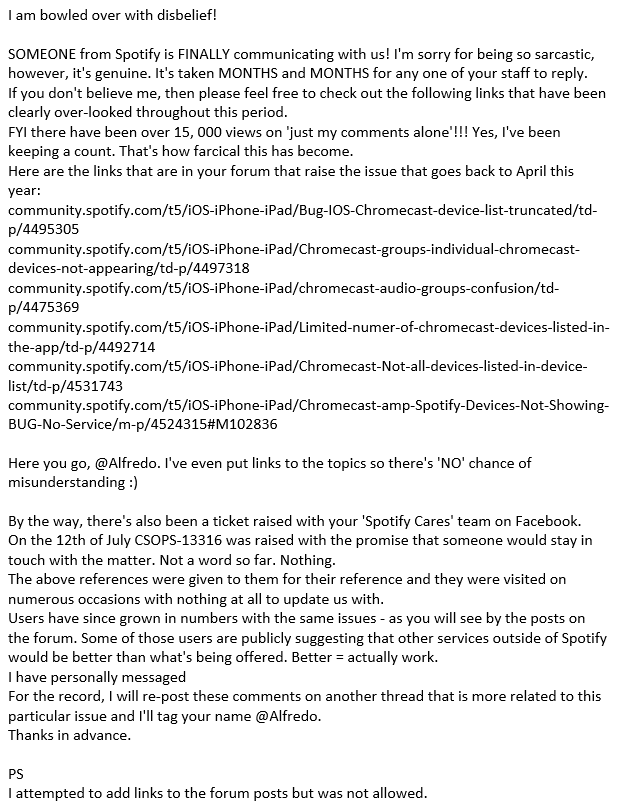 Thanks for the response and sorry for the delay. It looks like your issue was resolved in one of the other threads. Is everything working fine for you?

@nachismoss we haven't heard back from you in a while. If it's still not working, please get back to us with the information we requeted and we'll help you out.

Thank you for FINALLY making a comment on this issue.
Things are now (with IOS devices) working as they should be. However, there could be some improvement in the way the devices display.
Right now, it seems completely random how the devices are displayed.
Having them displayed as a 'sorted' list would prove to be far more user-friendly.

Then, of course, there's the unfortunate matter of the same display issues (as initially reported on IOS phones) currently still being an issue on Windows 10 computers. I hazard to say that this won't be fixed for a LONG time.... nor even acknowledged as being an issue.

Thanks for the update. The grouping of devices sounds like something other people might find useful. You can add it to our Ideas Board so that people can vote for the idea. The more votes we have, the higher chances are that we implement it.

We're always aiming for making the Spotify experience as user-friendly as possible, and we always appreciate the help and ideas of the Community users to reach a high level of optimization.

If there's something specific still going on, let us know and give us a bit more details and we'll look into it 🙂