I have a premium account and  just upgrade my phone and now I cannot get any songs to download to my iPhone - to play offline. Have checked all my settings and everything seems as it should be, but no downloading... I just get

Have you made sure that you allowed Spotify to download on cellular network?

Yes. Its set to download on cellular - on my iPhone 5, I always pulled it to my Mac to initiate the download process. Tried that - no luck. 😞

same here. Haven´t found a solution yet. I personally had that issue after phonecrash and recoverf rom Backup.

I hope support finds an answer or someone here that had that issue before.

Mine is doing the same on an iPhone 5C.  It won't go offline mode or connect to the spotify service.  It was fine a day or two ago.

Thanks. I've never had an issue w/ Spotify before on either of my iPhone 5 & 5s, so I was/am a bit freaked that this is an issue. 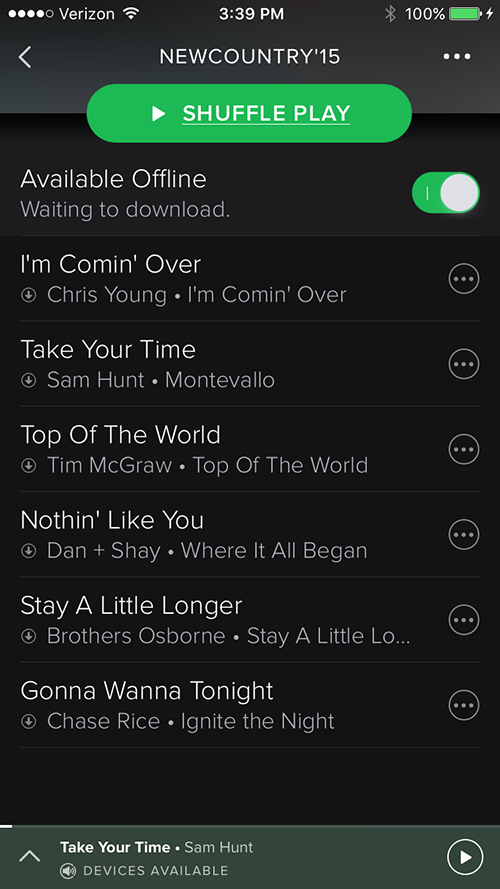 What made Spotify a killer app early on was it's Stitcher-like ability to play a custom station that would opportunistically download a "chunk" (a whole song over wireless to queue up and combine these with locally-available tracks loaded on the iPhone from iTunes.  This allowed one to start a station on a car trip and not worry about connectivity because the music would continue to flow.

What we have now is the most broke-down mess I have ever seen.

I filled up my phone with offline tracks from Spotify before I went on vacation this summer because I knew that cell coverage was bad at the beach.  But when I got there, despite the fact my phone was filled with music, there was an update.  Music wouldn't play until I did the update.  And after the update, none of the offline music was authorized any more.  Despite reloads & updates the app has been broken in some form ever since.

Both Spotify and Apple Music are in bed with the sound-breaking DRM content holders again.  They've quietly sold us out to those who never wanted 99-cent DRM-free tracks...and now they break our streams and downloads to get us to pay up for the same music over and over again.

I am sick of beta testing trash.  Goodbye Spotify...it's time to find something that works better, the first time.

Can you answer the questions below?

1. Did you follow these exact steps on how to listen offline?

4. Did a clean reinstallation help (yes or no)?