Who Me Too'd this topic

So, I'm not sure whether this is a known issue or not. Sometimes, an album that I haven't listened to in a while wouldn't load its cover art completely in the now playing screen and the notification controls. The music plays normally, but the album cover has a huge black bar covering it ... at least usually it's just a black bar on the bottom half of the image. This is the biggest one I've seen yet, shown in the image below. The cover art is barely there anymore. 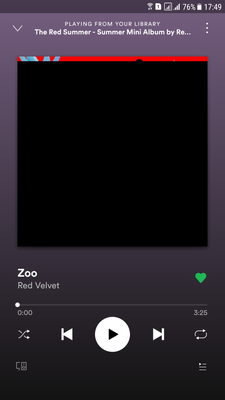 It's not really that functionally impairing since force closing (swiping the app off the recent apps screen) Spotify and then reopening it fixes the issue. But it gets kinda annoying, so I'm just letting you know that it's a thing. I feel like it has something to do with how the images are cached or something. I don't know. I do know that it's not a connection issue since the fix—of restarting the app—works even in offline mode.

I posted on Android since it doesn't happen on my iPad. Spotify there is doing something else, but that'd be a post for another day.

Labels:
7 people had this problem.
6 Likes
Who Me Too'd this topic
1