This is cool - reposting for the community. What do you think? Would you like to see this intergrated in your Spotify one day?

Spotify's musical map of the world
(Via Eliot Van Buskirk)

Music is a universal language — and maybe one with more variants than any other. To understand these nuances, let’s step back and see and hear how people around the world (cities and countries) listen to music differently, what they share the most, and more.

Click a country or city to hear its music (instructions below; full-screen version). 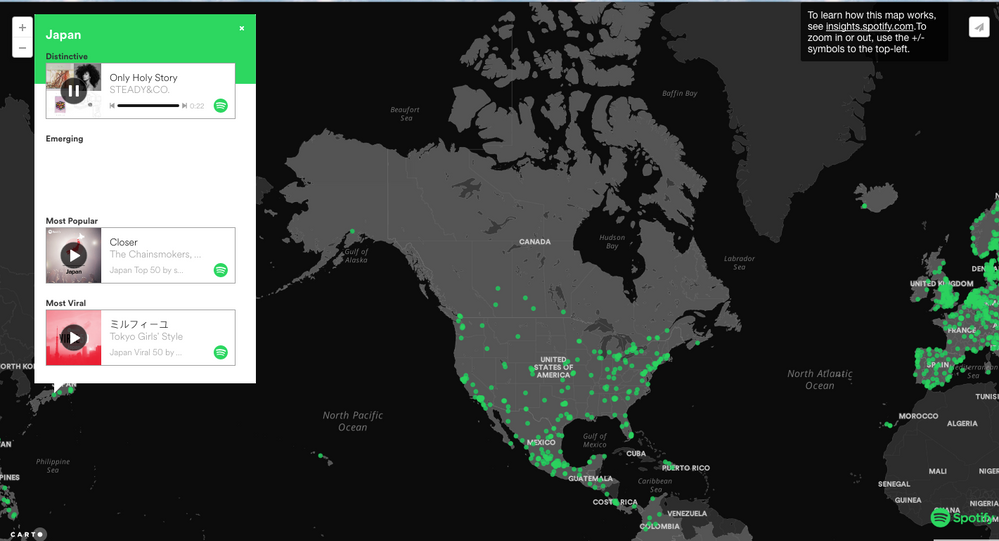 Navigate by dragging the map.

Zoom with the + and – buttons at the top left.

Click a city to hear music distinctive* to that city — songs that are enjoyed there disproportionately a lot relative to in other places. It’s a great way to understand the musical character of well over a thousand cities worldwide.

Everything in the musical map of the world updates every week, so you can embed a current version of the above map audiographic with this link, or the following HTML:

This version 2.0 of our audiographic map (first version here) includes new cities, plus four new country-level playlists and a native pop-up player so you can hear the places right there on the map (thanks, Carto).

* Spotify Data Alchemist Glenn McDonald analyzes many billions of listener-track interactions on a regular basis to distill each place’s musical character into those distinctive playlists.

Discovery is human. Sharing is caring.

@Musicologist yeah i thought that was fascinating!

I know there are allot of similar concepts out there already with a wider scope, but it's quite unique to have Spotify playlists focused in territories for the most Distinctive, Emerging, Popular and Viral.

I wonder if they'll start extending territories this way with playlists, before actually rolling out the new spotify in that reigon....

@Musicologist Yes! It would be so great to have this feature and exploring music will become infinity~

Hey guys! Awesome map. We live in the Netherlands and we love to listen to worldmusic and ethnic music from all over the world. This map is very helpful and an awesome initiative. We have a suggestion, after we visited the amazing islands of Cape Verde (Cabo Verde) and found out more of the country's culture and music we sadly noticed not any notes on music from there on this map. There has been made amazing music an very rich rhythms and a beautiful musical cultural history. Also it is foundation and roots music to a lot of different styles and knows styles like the amazing coladeira and (electro) Funana music. Luckily there is a lot of older and newer Cape Verdian music and playlists to discover on spotify, just add them on your map? It would be great to see modern and more classic music notations from that beautiful archipel for the African coast and help spread their amazing sound more global and have more attention like it deserves! Best regards! Tim and Florance from the Netherlands.

I remember seeing this a couple years ago and I thought it was really cool, but it seems that it doesn't work anymore. Any chance it can be brought back?