Since most ideas seems to be different ways to make our listening more efficient, smooth and comfortable here´s mine.
Many computers today already have integrated hotkeys (usually located above the F1-F12 buttons) that allows simple pausing and previous/next functions. However, keyboards/laptop keyboards that doesnt have these buttons would benefit from having an option to show a smaller version on-screen providing the same functions. The toolbar would be shown on top of current windows. (activated by pressing an (editable) hotkey?)  (See image)
While the current option works well enough, it force-minimizes the current window and brings up the Spotify window, which we then have to minimize, before returning to previous occupation.

This "toolbar" would probably be most appealing to gamers, since we dont like interruptions 😉 , but also to others who wish to make their music experience as pleasant as possible.

Sure, we´re talking about seconds.
But these seconds matters.

300+ kudos.  Nice!
When I wrote toolbar, I realize overlay would better describe what I'm hoping for. Much like how the Task Manager window has an option for "always on top", a very slim Spotify bar with the same propertiy would be great in-game or in any other fullscreen application.

Similar, but not the same:

Thanks for coming to the Spotify Idea Exchange.

We've discussed this idea and while it is interesting, we don't have any immediate plans to implement this. If we do have any new information to share, rest assured we'll check back in here with a new status.

In the meantime, it’s worth checking out the Windows 10 Game Bar, which can be accessed by pressing Win + G and allows you to configure a floating Spotify widget to control music playback.

Thanks again, and please keep those ideas and requests coming! More info on how your feedback reaches Spotify via the Idea Exchange can be found here.

This would be great!

I just posted a request for anything like this too. but they closed it.

They closed my suggestion told me to VOTE to this idea and to another idea that was closed that has 8000 VOTES.

So basically 10,000 people want this, but they closed it so now only 2000 people look like they are asking for something that should have been made more than 10 years ago.

I would love to see this as a mini skin of the Spotify app that just shows a small widget with the media controls and a scrolling text showing the song being played. It does need to have the option of staying on top of other windows. I play Spotify at work and need a more convenient way of pausing playback so I don't have to fumble around on my desktop when someone walks into my office. I find too often I feel like I am giving the perception that I am not attentive because I am trying to pause, mute, or turn down my music player. When this starts happening I tend to stop using Spotify.

Make it a toolbar similar to the Itunes and the Windows media player toolbar.

I've been a premium user (aka customer) for years and find it disgusting that this suggestion, which has had many duplicates (which means more than 10 THOUSAND votes so far), had ZERO attention since 2013! I am seriously thinking of moving to either Google's Youtube Premium service or Deezer.

Hey Spotify people, we buy your product because it is handy and friendly on numerous platforms.  Have the dev team make a cool widget for this, make it look pretty and have great options, and then throw that at your ad people and they push that everywhere, you make money, we are happy, we all win.  I bet if you follow the direction of this comment you make money just from following this comment.

Necroing because I'd really prefer something to come out of Spotify native rather than via Xbox Game Bar. The overlay is too big and clunky to efficiently use while gaming.

This is RIDICULOUS.
Spotify is without the minimum possible doubt the WORSE User Experience Team in the world.

They suck and suck and suck our money but never listen to us. They spend as less money as possible in the development because they think they are invincible.
But they are not.

I am going to Deezer and f@ck Spotify. If they need 6 years to just even say "we mark this as good idea" and after 10 years it still is not done, I am just out.

Thanks for coming to the Spotify Idea Exchange.

We've discussed this idea and while it is interesting, we don't have any immediate plans to implement this. If we do have any new information to share, rest assured we'll check back in here with a new status.

In the meantime, it’s worth checking out the Windows 10 Game Bar, which can be accessed by pressing Win + G and allows you to configure a floating Spotify widget to control music playback.

Thanks again, and please keep those ideas and requests coming! More info on how your feedback reaches Spotify via the Idea Exchange can be found here.

The bar at the bottom of the spotify desktop app should have a feature where you can either:
1) pop it out of the main window to place it somewhere on your screen 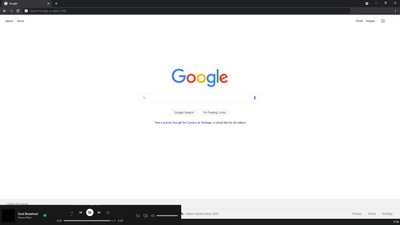 The image provided is an example of what this feature would look like.

This idea would be generally helpful and continent to use rather than having the full window open.

The widget in Win+G is nice and all, but it's far from ideal. What would be beneficial, however, is something similar to the Windows Weather toolbar [as seen below].

Having the media player (with basic controls, such as Like, Previous, Play/Pause, Next) would be an incredible addition to the Spotify Desktop application. This would make media playback faster for streamers (and anyone else who may need this discreet controls) and would literally take 2 seconds or less when that time is most critical. Then, similar to how this Weather toolbar works, clicking on the weather expands to show more details. In this case, the last song played and next 3 in the list. I am not skilled at image wizardry (as it's not my specialty); however, I have created a concept image to display how this would appear. 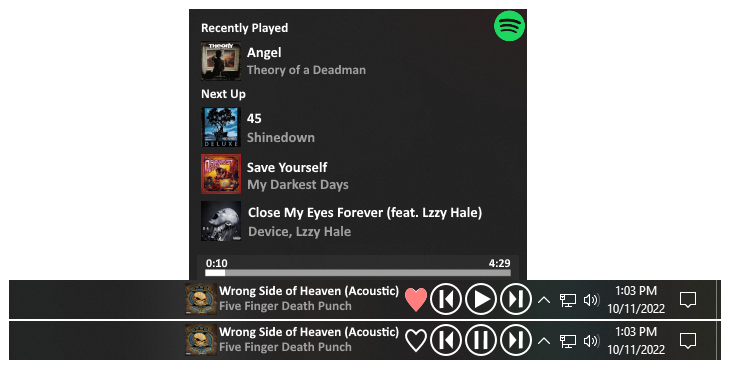 In this image, I have shown each feature I have noted. It's a really simply concept that would make a world of difference. Optional addition to this concept would by similar to in-app: hovering on a track in the list would display a similar Like and Play buttons.