[Desktop] Toggle the display of album covers in playlists

UPDATE: thank you all who supported the idea! A clean UI is a happy UI, hopefully we will have to option to clean ours up very soon

Please give us the ability to decide if you want album covers toggled on or off in a playlist. In the current look they takes up so much unnecessary space and it would be nice to just be able to set them to 'do not display'.

I am aware this will be marked as a duplicate of this idea but that was 2 months ago and is now closed.

Thanks for bringing us your feedback in the Spotify Idea Exchange.

Your suggestion has gathered the votes necessary and your feedback is now reaching the internal teams at Spotify. They're aware of the vote count and popularity of this idea. We'll continue to monitor and check out the comments here, too. As soon as we have any updates on its status, we'll let you know.

More info on how your feedback reaches Spotify via the Idea Exchange can be found here.

And reduce row height with it.

Seriously! It makes going through my playlists incredibly slow - not only do I have to wait for unnecessary artwork to load, but if I am searching for a song in a heavily populated playlist, it takes a long time to scroll and find it.

The new Desktop app UI adds an album cover right next to the song title and artist.

1) Songs are 'taller' on the screen, so far fewer of them can be viewed at once in a playlist. This makes it more difficult to scroll through and find songs in playlists, and to see what's coming up next. On the old UI on my 13 inch laptop I could see 15 songs at once within the window, but now I can only see 8 or 9. Part of the row height is that the Artist is now tucked underneath the song name, but I hope that Artist is returned to a separate column (as a different 'New Idea' suggests). Crunching together the album art, Song title, and Artist is a great solution on smartphones with a portrait orientation, but Desktops have much more horizontal space than vertical, and so changes that make the song entry taller make playlists less user-friendly.

2) This can make the song title itself harder to see. The mass of colour next to the song title (and artist) draws the eye first - this is distracting, and makes it take longer to process the text. This makes finding a particular song in a long playlist difficult and frustrating, and may be even more so for some users with certain accessibility issues.

3) The album art itself doesn't add much (if any) useful information - the art square is too small to see what the album is anyway unless the user is already very familiar with the artwork. Text on the album cover generally isn't readable at that size, and the details of most artwork is not visible.

Allow users to disable column that contains the album cover display in the desktop app. I'm sure some users will like the new layout, but for many others it makes Spotify on Desktop much harder to use. It could be solved simply by allowing users the choice to effectively disable the album art display in playlists. Allowing users some ability to customise the appearance of the Desktop app will go a long way toward ensuring that the experience matches what users expect, would add very useful functionality for a great number of users, and would allow many of us to preserve what we love about Spotify.

Hello and thanks for sharing your feedback! We’ve gone ahead and marked this as a New Suggestion.

As you've already mentioned this is a repost of the inactive idea here - 'Inactive Idea' is a status we no longer use in our new idea process and has been replaced with 'Closed - Not Enough Votes'. The difference is that inactive ideas are closed for voting, while an idea that didn't get enough votes within a certain timeframe can still be upvoted and will be reviewed if it gains popularity and reaches the required amount of votes.

We hope you'll find this clarification helpful. More info on how your feedback reaches Spotify via the Idea Exchange can be found here.

Hey! I've created a UI for Spotify to consider:

If you like it, your vote is highly appreciated.

I just hate the colours. I want my Spotify to be as "dark mode" as possible. At least on the liked songs list, it's easier on the eyes for when you're playing late at night and don't want anything bothering you.
Honestly, the UI should just be entirely customizable. I don't see why not.

The album covers everywhere I think must be responsible for why this new Spotify is so resource intensive. I have a powerful laptop but it's using 74% of my CPU even when a song isn't playing. So just having the app open is giving my laptop a meltdown. This didn't happen before the update. I suspect the cause is having to load dozens of image files on every page. This would be also why navigating between tabs and screens now is PAINFUL. I get up to 30 seconds of little dots each time. It's like I'm using a dial up internet. It's not good enough that this is still not fixed over a month since this awful update was released. I don't care about album covers, I want artists, song names, album names. Please give us the option to switch these off and crate a more seamless spotify experience as it used to be. 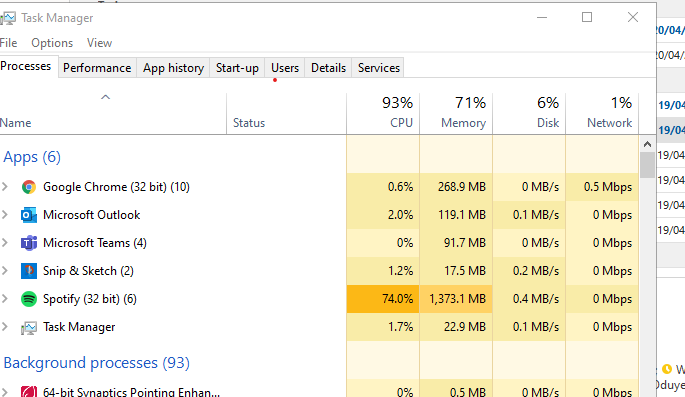 @Xenia I belive that this is now technically a good suggestion?

Your suggestion has at least 50 votes in 3 months! Keep gathering votes. If this idea gets enough votes, Spotify will check it out and post a status update. You can read more about the idea process here.

My liked songs + playlists are a bit too clunky with the album art and stacked song + artist name.

My screen can only fit 14 songs at once. I understand that I can zoom out, but I'd like to maintain readability which is why I think there should be a compact and comfortable mode, with compact not having album art and having the song and artist name be next to each other. I believe the UI last year was like this.

(sorry about the uneven photoshop job)

I preferred when Spotify looked more like this, and I think I speak for all users when I say we should have a say in how our user interface looks