Every time I load the Spotify app from my Samsung Gear S3, it gets stuck on the loading screen (picture attached).  Force closing the app from my phone does not work.  Restarting the device does not work.  Uninstalling and reinstalling the app does work, but this is a major inconvenience because you then have to re-download all playlists that you want to access in offline mode (which was the only reason I bought this watch).  Any help would be appreciated. 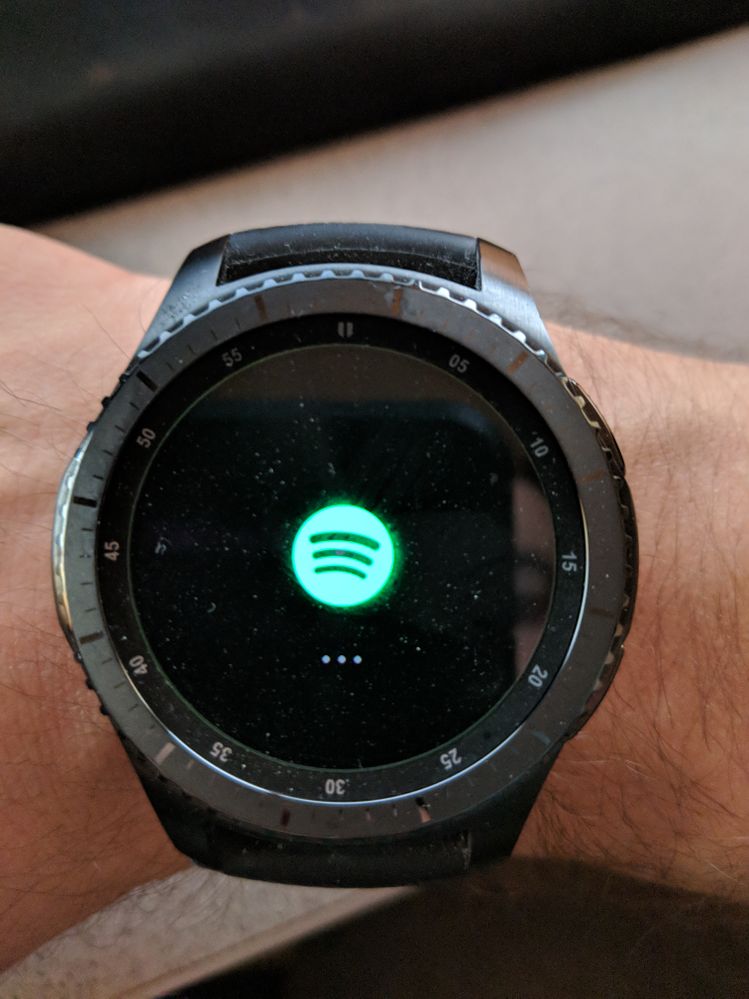 I have kind of the same problem with my Gear S3

If i charge it, or sometime not using it frequent,

and then go in to the spotify-widget, it's "loading"

and i cant use spotify at all - but have to erase everything on watch,

and then resync/download all playlists again.

I have the same problem on my Gear Sport.  Just like you, rebooting the watch does not fix it.  I have to uninstall the app, re-intall it and download all of my playlists.  It's disappointing that with all of the various issues with the app, updates to the app or few and far between.

Not sure if this will be helpful, but I had several private message conversations with the @SpofifyCares group on Twitter.  I mentioned to them the issue we're having and they mentioned they would look into it further.  I even sent them a video of the stuck Spotify logo with the 3 dots.  Not sure what will come of it, but maybe if more of us would let them know our experiences (if not done already) we may get some movement on this issue.

On a side note, I mentioned this issue to them on July 11 and since then I had downloaded music from my private collection directly to my watch (bypassing the app) so I could listen to music while running without having to take my phone.  The Spotify app was stuck for days.  I just checked the app again today and noticed that it is working again.  It still had my playlists and I did not need to uninstall/reinstall the app.  Not sure how long it will work before the app gets stuck again.

It happend to me 2-3 times. I got Gear s3 with Tizen 3.0.0.2 as well. After it restart the device all those time, it worked, and it had not happen anyomre. Maybe you should try restart the device, and wait some more time untill it finally being nice and opens.

But indeed that app has many bugs.  I opened a thread, I guess you all find the same problems.

I'm having the same problem on my Gear S2.  Latest version of the app and of the watch software.  Very annoying.  It's been happening for a while.  The only thing I haven't done yet is uninstall and reinstall the app.  The widget (not the app, as I can't access the app at all) shows the last song I played when the app was working, in the background, but has a constantly spinning circle over top.

I use my watch with my Galaxy S8 if that helps at all.

Unfortunately, restarting the device did not help.  This behavior has appeared several times.  The only way for me to recover is to either 1. uninstall the app from my watch, resinstall and download my playlists again or 2. allow the stuck app condition to be present for days, then start the app again and it works.  This method has worked one time for me.  However, I don't want to depend on this method as it is not reliable and should not be necessary.  For now, I've downloaded some of my own songs onto the watch outside of Spotify in case the app gets stuck again.  That way even if the app freezes, I can listen to music on my watch until the app begins working again on its own or until I decide to uninstall/reinstall the app again.

When I mentioned to Spotify support about the app working again on its own after days of being stuck, they mentioned they were not able to replicate the issue and referred me to Samsung support.  Not very reassuring. I did mention to them that I'd be willing to share any app logs from my watch or perform any degugging on my device to help.  I think they just don't want to look into it further, which is unfortunate.

Thanks for sharing the thread.  It seems more and more people or seeing issues.  Hopefully they will get resolved in someday.

I've had the same issue and the only fix that I've found is to connect gear S3 to WIFI then starting the app. It seems like the Spotify Gear S3 app gets stuck in the endless loading screen because of an unstable internet connection through Bluetooth, at least for me. I've since used the settings within the Spotify app in gear S3 to turn on "offline" mode and had no more problems. Just make sure to turn offline mode back on once in a while to synchronize updated playlists.

Thanks for the info!  My app has been stuck for a few weeks.  I enabled wifi on my watch and then the app became responsive again.  It synched updates to my playlist with no problems.  After disabling wifi again and using only Bluetooth, the app still works...for how long I don't know.