I Havn't been able to get the web player to load for about a month now. When the page loads it loads everything but the album art and clicking any song results in "Oooops, something went wrong with the playback"

I've looked in the developers console in both Chrome 64.0.3282.24 and Firefox 57.0.1 and the only thing that stands out is guc-spclient.spotify.com/track-playback/v1/devices has an HTTP 429 status code when initiated by open.spotify.com/browse/featured but an HTTP 200 status when initiated by raven.js.

Both browsers have had the cookies removed and cache purged and still do the same.

Firefox also has api.spotify.com/v1/me/notifications/user?connection_id= giving an HTTP 400 status code, but Chrome does not, so i think its inconsequential.

Any help is appreciated!

I've been having the same problem, except that it only started recently, about May 22. I did have issues with it last week (~ May 17) where it was stuttering. I assumed that it was a Spotify server or network issue, and that seems to have been the case because it hasn't reoccurred. With the current issue, I again assumed it might be an issue that would resolve itself. However, no luck so far.

I can reproduce the issue on:

both in regular and incognito modes by clicking to play a track, any track, on any page (playlists, artists, albums). The error message is "Ooooops, something went wrong with the playback. Reload", in a pink bar at the top, where "Reload" is a link to refresh the page (see screenshot). (A hard reload via Shift-F5 does not help.) When the pink bar goes away, there is a blue bar underneath that says "Track unavailable" or similar, but it disappears almost instantly. In both browsers I have DRM enabled. 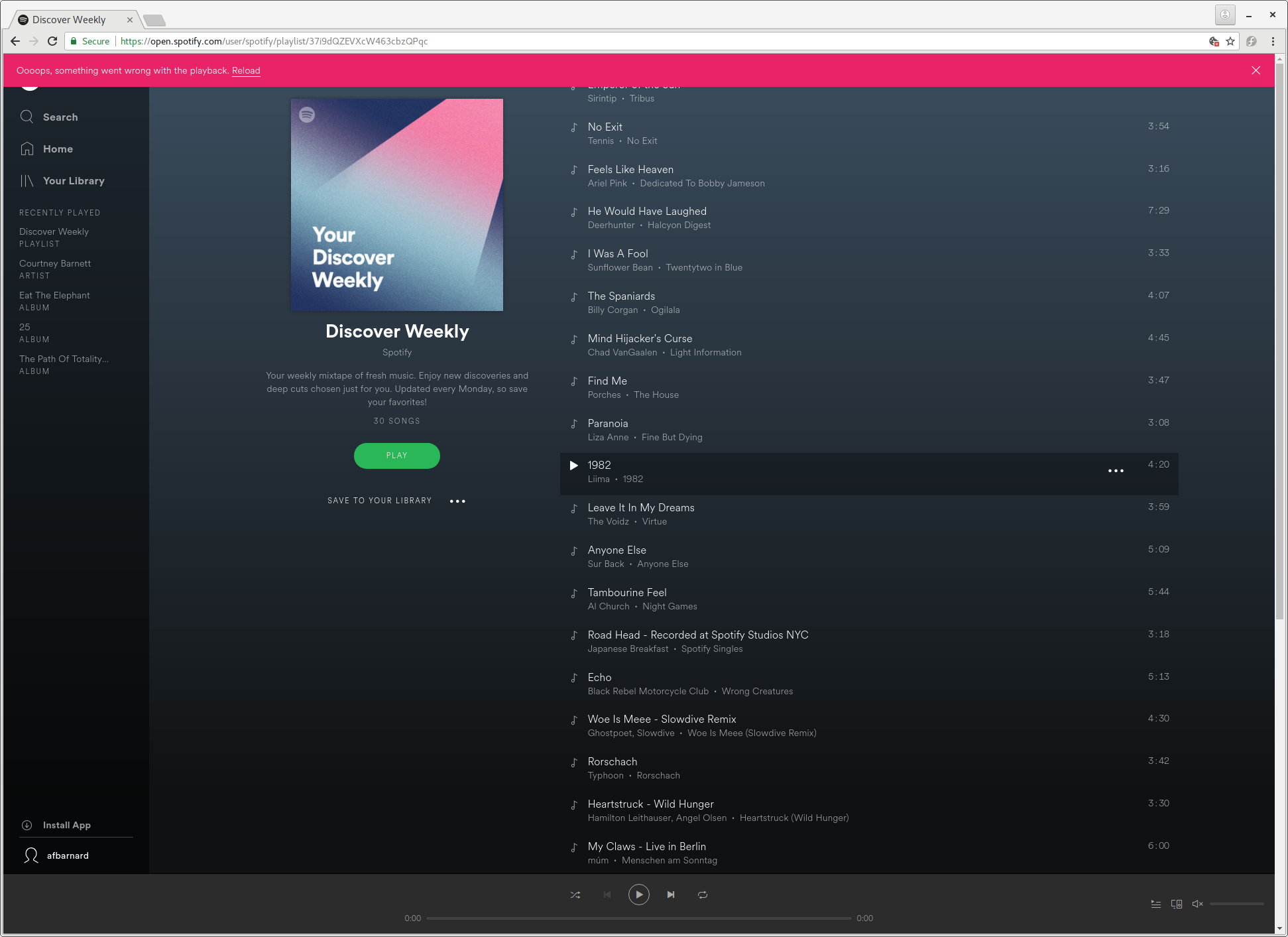 When I was searching yesterday for help on this, there were a number of posts suggesting that playback problems were related to playback being attached to a different device. Clicking on the "Connect to a device" icon in the lower right in the playback bar showed no way to select the web player as the current device, however. But a few minutes ago I remembered that Spotify was last working when I had been listening with the Android app. So, I opened the Android app, played music for a few seconds, and then explicitly, "cleanly" closed it by swiping it out of the notifications window shade. Having released its lock, playback on the web player now works again for me. This suggests that the Android app has a problem where it doesn't always release its lock before it closes.

2. Exit playback on that device

4. Play a track, which will hopefully work now

Unfortunatly this is the only device i have used spotify on. My mobile phone runs Sailfish OS, which has neither a spotify client, nor the reqired widevine module to play spotify from the browser.