Music stops play after my android-phone goes to sleep mode.

Music stops play after my android-phone goes to sleep mode.

Well yea, the title says it all. When I play a song (headphones always plugged) and my phone goes turns the screen of, spotily stops streaming. (well not instantly, but after a while) it's not an internet problem, promise!

PS:/ Will android get the "Extreme quality" feature?

I'm having the same issue..... I offline all my playlist, so it's not a connection issue. But as soon as my phone's screen goes dark the music stops playing. If I set my settings to allow the screen to always stay on it works fine but that's a MAJOR drain the battery. Any tips out there??? I'm using HTC EVO Design.

Hi. Install the preview release - I suggested this to someone with the same issue yesterday and it sounds like it solved it. It also allows extreme quality.

Almost as soon as I did, a thought popped into my head. I realized that I have an auto-end list that kills certain programs if they are running after two minutes of my screen turning off. Low and behold, spotify had made it on that list. I turned it off yesterday and spotify has not once stopped playing. It is working fine now.

I don't know if everyone else having this problem will fall into the same boat, but I would suggest to anyone coming across this post that has the same problem to check any apps you have running that kill tasks and make sure that spotify is not included in that list.

"I realized that I have an auto-end list that kills certain programs if they are running after two minutes of my screen turning off. Low and behold, spotify had made it on that list."

I was two seconds away from cancelling my subscripiton, glad I didn't because that solved my problem!

I guess it is an external app which manages these tasks like "Advanced Task Killer".

I have been having this exact same problem ever since I got a new phone (Samsung galaxy s6), the app worked perfectly on my s5. I feel as if the solution is just out of my reach, I've spent so much time scouring my apps trying to find the "task killing" app or anything else that may contribute to the "auto-off" but I've found nothing. This is very frustraiting, please help!!

TomMac93
Casual Listener
I never actually found out what caused it! It uninstalled and reinstalled
the app and as far as I remember that fixed the problem. I never got to the
bottom of why it happened.

Hey @officialskinner, check out this post to see if it helps.

Spearjodi
Newbie
If you have an apple it's under general, back ground app refresh
Reply
0 Likes

Hey guys, I'm dealing with a similar problem but with my default music player app. According to a post I read on android's support site, the issue lies whithin Lollipop OS itself an will be smoothed out in the next update. Music pauses for about 15 secs, then starts playing again right? It does this on all music players, In sleep mode or not, on all android devices. Unfortunately, there is no permanent solution.

RyanPolicarps
Newbie
Well, having the same problem too. Spotify automatically closes and stops the music when my screen is on sleep mode (same problem with you guys) but I fixed it. If you have the following settings then there is a 99% of chances that it will be fix.
So first go to your

Settings > Power Saving
(As shown in the first picture)

Power Saving > Protected Apps
(If you have this kind of setting, as shown in second picture)

Note: Protected Apps are the following applications that will continue on running even if the phone is on sleep mode. The two applications which are Facebook and Messenger are both turned on but the Spotify is not.

So turn on the Spotify app then it wont stop closing and playing the music even if your phone is on sleep mode.
(As shown in the third picture)

I hope this will help you! 🙂
policarps1213@gmail.com 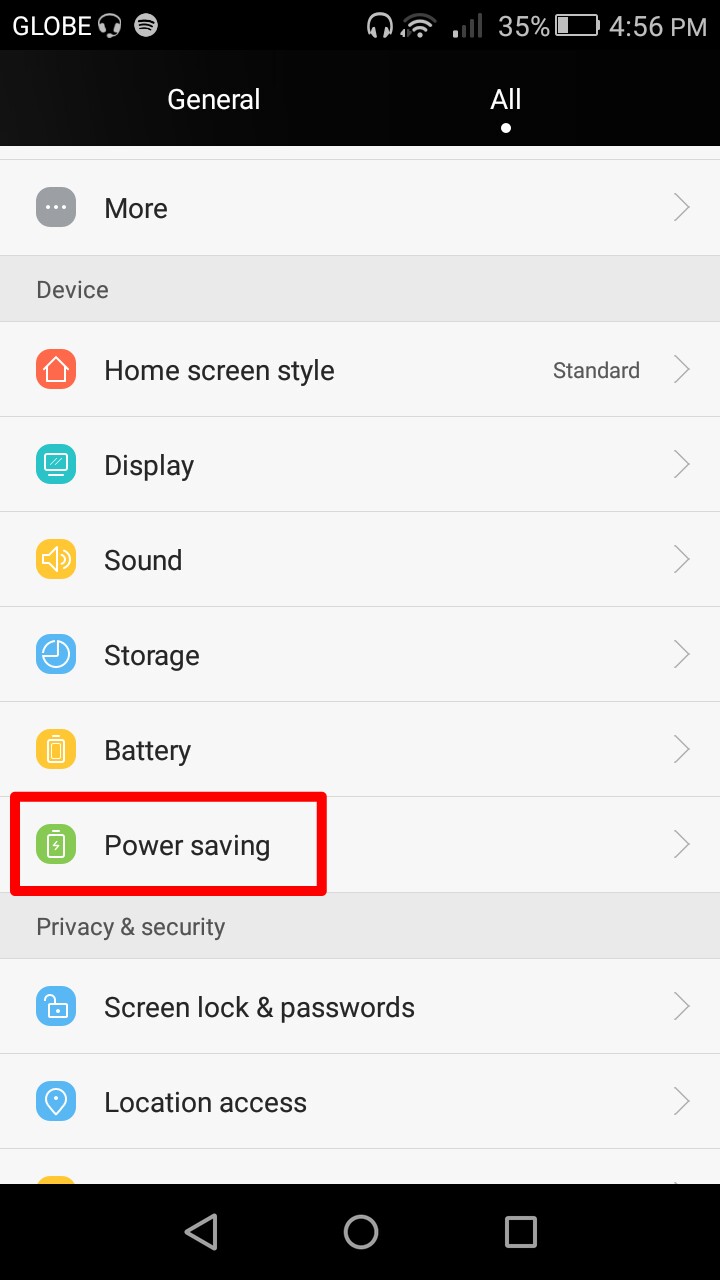 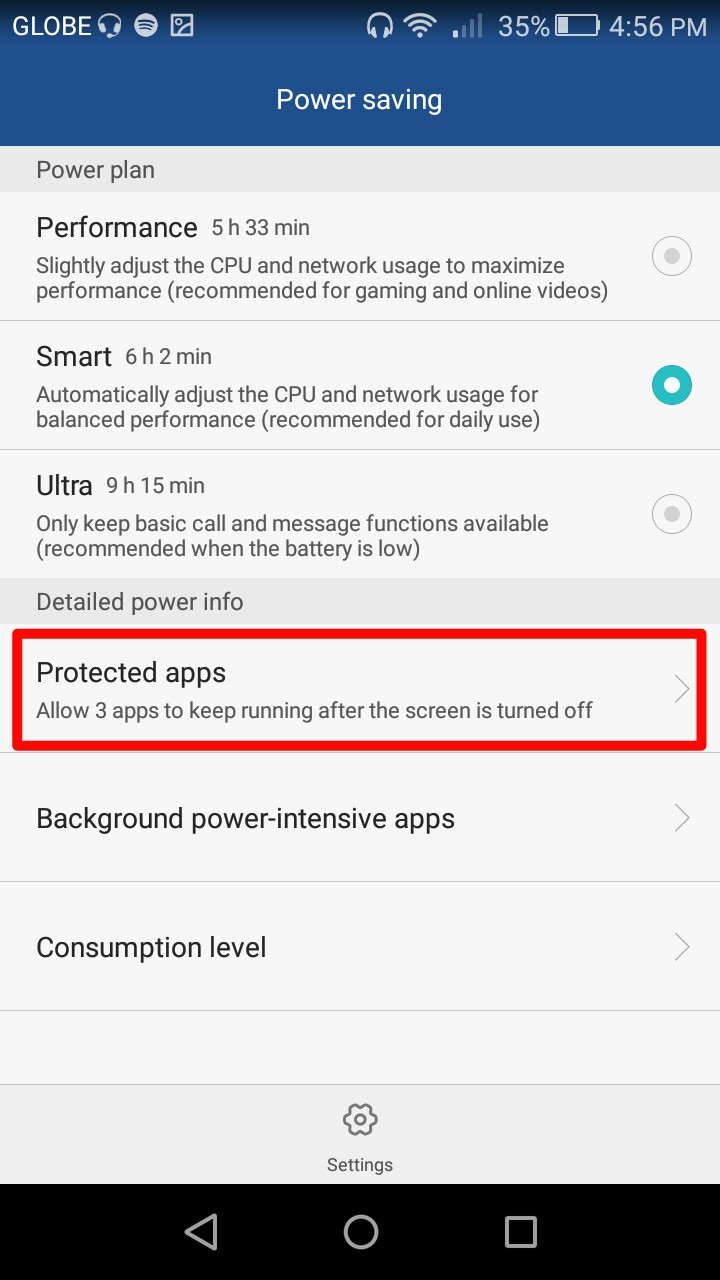 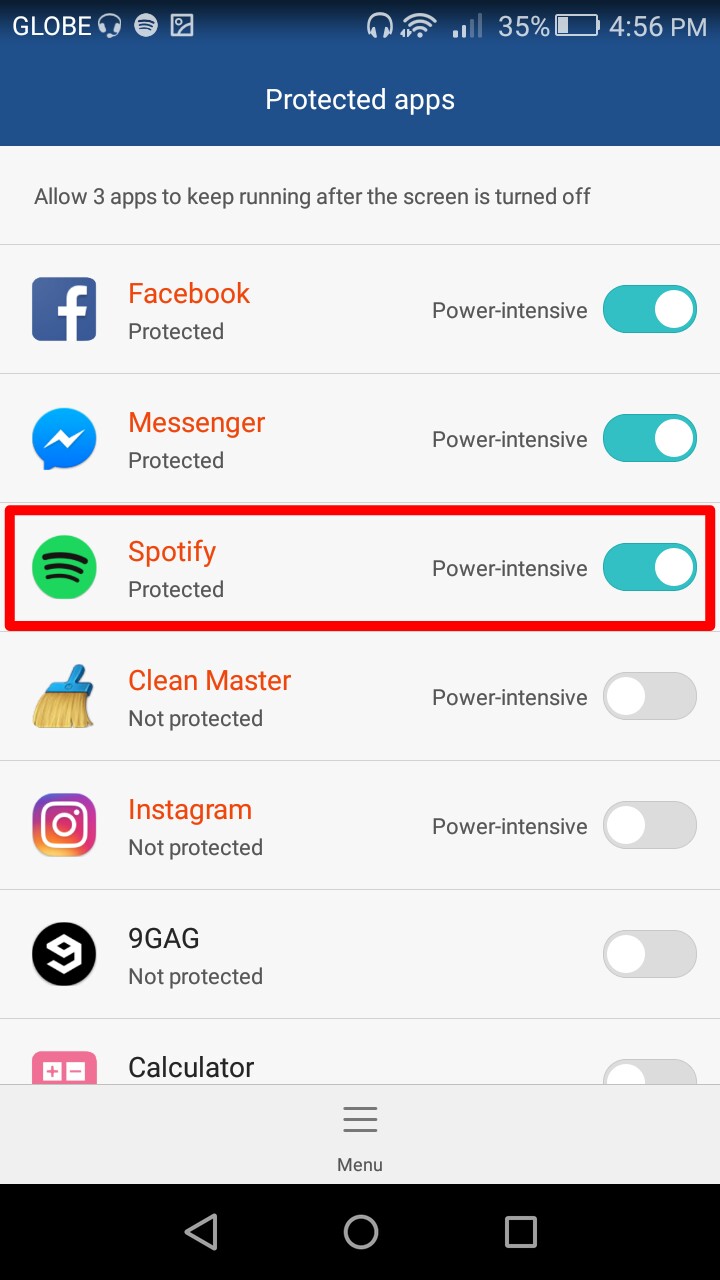 RiddleOfSphinx
Newbie
Just thought I'd put my 2 cents in. For those who have US Cellular. If you use the Bill Reducer app. Having this on will cause spotify to drop out when your screen shuts off.
Reply
0 Likes

Sherlyn
Newbie
Hi, just wish to say thank you! For your solution! It works perfectly on my android phone- Meizu. I have been facing this problem few weeks back and so frustrated each time Spotify just off once the screen went off! I have searching my phone over and over again but couldn't find it till now! Never face this problem when using iPhone! 😫
Again, thank you very much !
Reply
0 Likes

I also just fixed this issue on my Galaxy S3. I was using a power saving app called Juice Defender.  I have to stumble around in it until I got to the Triggers\Apps\Configure option area.  In there I found the Spotify apps and set it from teh default to Enable\ScreenOff - which then allowed the apps to keep running after the screen went blank.  Hope this helps someone 🙂

Didi8
Newbie
Does not help..