Rkeridge20
Newbie
Everytime I open the Spotify app on my mobile it redownloads every song I have, then when I go out and use the app to listen to my music it starts downloading again using mobile data. Even though I'll wait untill it's downloaded all the songs via WiFi then make all songs available offline (little green arrow appears). I haven't had this problem before untill the most recent update. Its very annoying as I use it quite alot on the go (work, gym, car) and it's nearly put me over my data allowance!! Anyone have any ideas as to why this is happening and why I can't listen to my music offline?

AndyUrie
Casual Listener
In your Spotify settings you can turn off download when using cellular data, about the other situation, that used to happen to me because I follow playlist that are constantly changing and therefore they download again, check if that is your case, if not then just try the first option or wait for someone else to reply 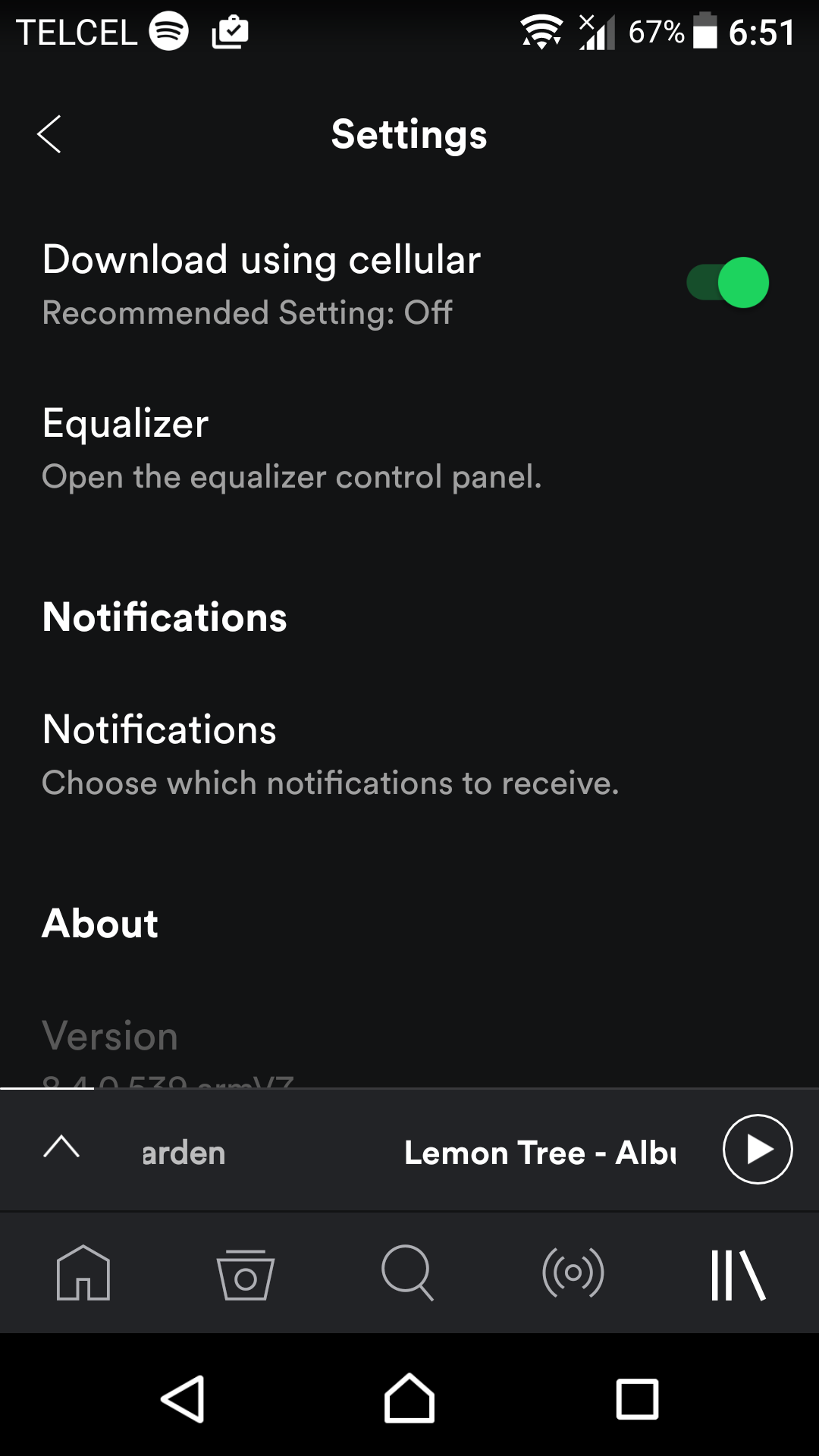 yo i contacted spotify and the real reasson is your storage is sd card. sometimes spotify disconnects sd to spotify so u need to use ur internal storage. its real if it works like and mark it as solution

Im having the same problem... My whole library redownloaded 4-5 times in the past 2 days... Irritating yes! I cleared all my

- I cleared all my spotify cache from the app.

- Cleared chache and data from the application manager

- Then as expected my preferences (albums, offline music playlists i set to download were gone) as expected when i signed in again

- Downloaded my playlists on by one

- Anyway, i reckon it might be a fault with my SD (samsung 64gb Evo - quite a good card in general from what ive read)

While im waiting for my new card to arrive, what I found to be a workaround, is to go into the settings of the app and under PLAYBACK (top of the menu) make the app Offline (it gives you 29 days to go back online and update your library)... even so some playlists wont play but oh well...

Hope the whole thing resolves because otherwise I see no use of premium subscription... Perhaps other services might be less hassle (i used deezer for 6 months - no issues whatsoever)

YvanKyle
Regular
Im **bleep**ing having the same problem!!!!!!!!!! It is very irritating and consumes almost all of my wifi data allowance! Id rather download music videos than use spotify which takes more data! I didn't PAY for this kind of **bleep**ING SERVICE!
Reply
4 Likes

Spotimy
Casual Listener
I discarded my SD card and got a more high spec one... It's working fine
now. Hope this helps.

Mmmhmmmheinz
Newbie
I'm on an S6, no SD card and started having this issue last couple days. I'm pissed and now looking for a better app. May just have go back to illegal downloads again.
Reply
2 Likes

Shawn7676
Regular
I just had this issue today when the app reopened, I removed the other offline devices weeks ago and this doesn't seem to be fixed, Spotify does this occasionally, there is obviously no way to fix this problem for me, if anybody figures out a solution please tell me how to fix this.
Reply
0 Likes

Allyjaffa123
Casual Listener
Hi everyone. First timer on here but pulling my hair out.
I have a similar issue where even after re downloading all my songs for offline listening, they disappear again within the hour. Funnily enough, songs saved on downloaded playlist remain available to listen offline.
My Sd card seems OK as it's playing those songs fine and my other media is working from the sd card (pics/vids). Please can someone offer some advice. Thanks.
Reply
0 Likes

AmbroseBaptista
Casual Listener
Same issue for a little over a week now! I recently added an SD card and switched over the storage to it. However** as of yeaterday I can't even findo the storage option in my settings to switch between device and SD:/
Reply
0 Likes

Wolfcyclesnj
Casual Listener
So I gather from reading all these posts that spotify seems not to care that we are having this issue. And I also can not find a way to contact anyone from a "non-existant" tech support... They must not have the funds. One would think that the company would like us to continue paying their subscription fees. I don't know about anyone else but if I can't get a hold of anyone to at least try to resolve this issue, I'll be taking my money elsewhere. Any suggestions on other apps?
Reply
3 Likes
Marked as solution

AndyUrie
Casual Listener
In your Spotify settings you can turn off download when using cellular data, about the other situation, that used to happen to me because I follow playlist that are constantly changing and therefore they download again, check if that is your case, if not then just try the first option or wait for someone else to reply

Wolfcyclesnj
Casual Listener
I will try un-following my playlists. Thanks for the idea

I don't follow playlists and I still have the issue, as I believe many other have. I was Google Music subscriber for a long time and moved to Spotify few months ago becuase of this, and now the redownloading issue is happening on another app. I'm afraid the real issue is not the app itself, but SD Card FileSystem issue, Android, or something else. I don't have a solution, but I saw someone in the thread who had the same issue and solved by replacing to a better SD Card. I will try this soon.

Allyjaffa123
Casual Listener
Thanks for your message. I should've responded but I solved my issue by
removing a device. As you know you're allowed 3 devices. When I removed one
I was able to download and retain my songs on my new device. School boy
error I know.

I'm 99% sure it has to do with DRM (copyright protection).  In order to verify that the songs you have are still licensed to you (aka you're still a subscriber) it has to redownload the songs with the newest authentication.

Between this and shuffle being broken constantly (plays the same 5-15 songs out of a 3,000 song playlist in a loop) I'm seriously considering going to someone else.

Having it re-download my entire library (~3,000+ songs) drains my battery and prevents me from lisenting to my music without maxing out my data plan.


I'm 99% sure it has to do with DRM (copyright protection).  In order to verify that the songs you have are still licensed to you (aka you're still a subscriber) it has to redownload the songs with the newest authentication.

That's not it - downloads are only removed if you haven't gone online in 30 days. You should also see a notification warning you of this in spotify.

I figured it OUT! It was the SD Card. Faulty i suppose or just plain cheap? I bought a new/different brand and havent had an issue since. Thanks guys!

I'm having the issue with an iPhone. I hit my three device maximum the other day when I only use my one phone for downloading music. Reset all devices and deleted and redownloaded the app. Still redownloading songs, greying out songs that were definitely downloaded, and (weirdly enough) playing songs while in offline mode that were not redownloaded after reinstalling the app. And why is there no customer support?

I'm about to give up. This happens all the time to me. I don't have an SD card. I have done the suggested clean re-install. I go online once a week. All my downloads still vanish.

I was able to get someone on Spotify's end to clear a cache and then I uninstalled and reinstalled. She seemed pretty confident that she knew what the problem was. Try starting up a chat session with customer support and see if that helps. Today I had no issues so we will see. Good luck, I know how irritating it can be.