On 24 March 2015, we rolled out an update to the desktop client for GNU/Linux. For installation instructions, see:

The version of the client is 0.9.17, and it will be the final 0.9.x client released for this platform. It has been a long time since the previous release (with the prior version being 0.9.11), and for those interested in the release notes, they will be identical to those for other desktop platforms for the versions 0.9.12-17, with the addition of the following platform-specific fixes:

We have decided to make a final release of 0.9.x desktop so that our users can pin this package if desired. Also we will make a separate package for the 0.9.17 release so that it is easier to find in the apt repository in case users need to revert to the prior version.

*EDIT*: The 0.9.17 package is now available, it is called spotify-client-0.9.17. If you don't want to receive the 1.x version, you can install this package instead (note that it both provides and conflicts with the spotify-client package).

Going forward, the official Linux beta will be released very soon! There are already some unofficial beta links floating around the forum, but so far we have not published a deb package to our official apt servers yet. We have been very busy getting 1.x out the door and sadly have not had as much time to devote to the GNU/Linux releases as we would like. Also, it has been unfortunate that we have not been better at keeping up with releases for this platform in general, but we have taken some steps to improve this for future releases.

- However, we do not have a 32-bit version of the client available now. This is difficult for us to do for a number of reasons, but we will consider doing this if there is enough demand from the userbase.


I have problem with libudev.

I'm using elementaryOS Luna (64bit) which is based on Ubuntu 12.04 LTS. This OS supports libudev.so.0 and there are no entry for libudev.so.1 in the repository.

The program don't start from the launcher and give error from terminal.

I've found a workaround on some forum.
That solution makes a link from libudev.so.0 to libudev.so.1
This seems to work everybody. However, I read that this solution is a dangerous and bad practise (I didn't find out why.)
This is the code for the linking:

My questions:
Can you update the program to support libudev0? (elementaryOS Luna still have 2 years lifetime; eOS Freya supports libudev1, but it is considered unstable beta yet)
Why this linking considered to be dangerous? Will it need any special care if I do it?
Are there any other (safe, elegant) mode to solving this?

Anyway, thanks for the Linux support! I love that it get more and more attention from everywhere.
Note that I have only chosen Spotify in the first place a year ago because it has native Linux app. (You can copy-paste this sentence to your sales manager. 😄 😉 )

The libudev thing sucks, I know. However, the symlinking hack is only dangerous if you are using applications which depend on an incompatible ABI in the v1 of that library. For Spotify (which doesn't actually use any such APIs within libudev), it is safe.

In the near future, we will update the CEF version used in the Linux client, and the issue should be fixed there. So we will still require libudev as a package dependency, however we will be able to depend on libudev instead of libudev1 and just use whatever version the system has installed.

I had the same problem on Jessie.  I think the dependencies are wrong in the .deb, as installing other packages addressed the problem for me.  libavcodec53 and libavformat53 are only recommended - not required.

Try checking if the following are installed.

joontje
Casual Listener
Right an update regarding this.
.asoundrc works a little differently when your pc has more than one audio device.
if aplay -l returns one than one device it will list them as card 0-1-2-3 etc and device 0-1 etc.
Card and device number have to represent the numbers set below, this is what you put in .asoundrc

Great, exactly what I expected with this change of technology to more cross-platform technologies.

The new tray icon is too big for KDE enviroments. There's a way to force Spotify to select a smaller size?

Spotify Connect is available for the linux client??

I very appreciate that you thought of those amongst us that find version 1.0 not ready yet in regard of multiple aspects. I guess Windows users would have LOVED the possibility to pin 0.9 or roll back 😉

Additionally I think we linux guys are the best audience to give access to a testing and pre-beta repository. We are used to try bleeding edge, cope with expected breakage and over all we know, how to suffer proudly 😉

So thank you very much that you grant us options instead of immutable decisions.

And thank you for your courage to do such a big rewrite. The negative feedback shows, that this was a tough decision, but I hope that the new software base in v1.0 will allow you to redeliver the lost features soon and in a more senseful way, as well as opening possibilities for new and better features.

Up to now - ignoring the missing features - I find the new software base breathtakenly great. It loads blazing fast, using way less RAM and CPU resources and feels way more responsive. Additionally I love some of the new features it already has, like the lyrics view and the easy access of the queue.

But I want to clearly state, that I expect you to listen to feedback (at least the sincere and polite one) and give us back all the features on v1.0 which we need and got used to with 0.9.x. Thank you.

I found 2 problems on my spotify client:

If I click on the menu -> Help -> Spotify Community I receive "Page not found" link (https://www.spotify.com/bg/lithium/community/)

The second problem that I have is with some icons. See the attached file.

Behind Proxy with authentication 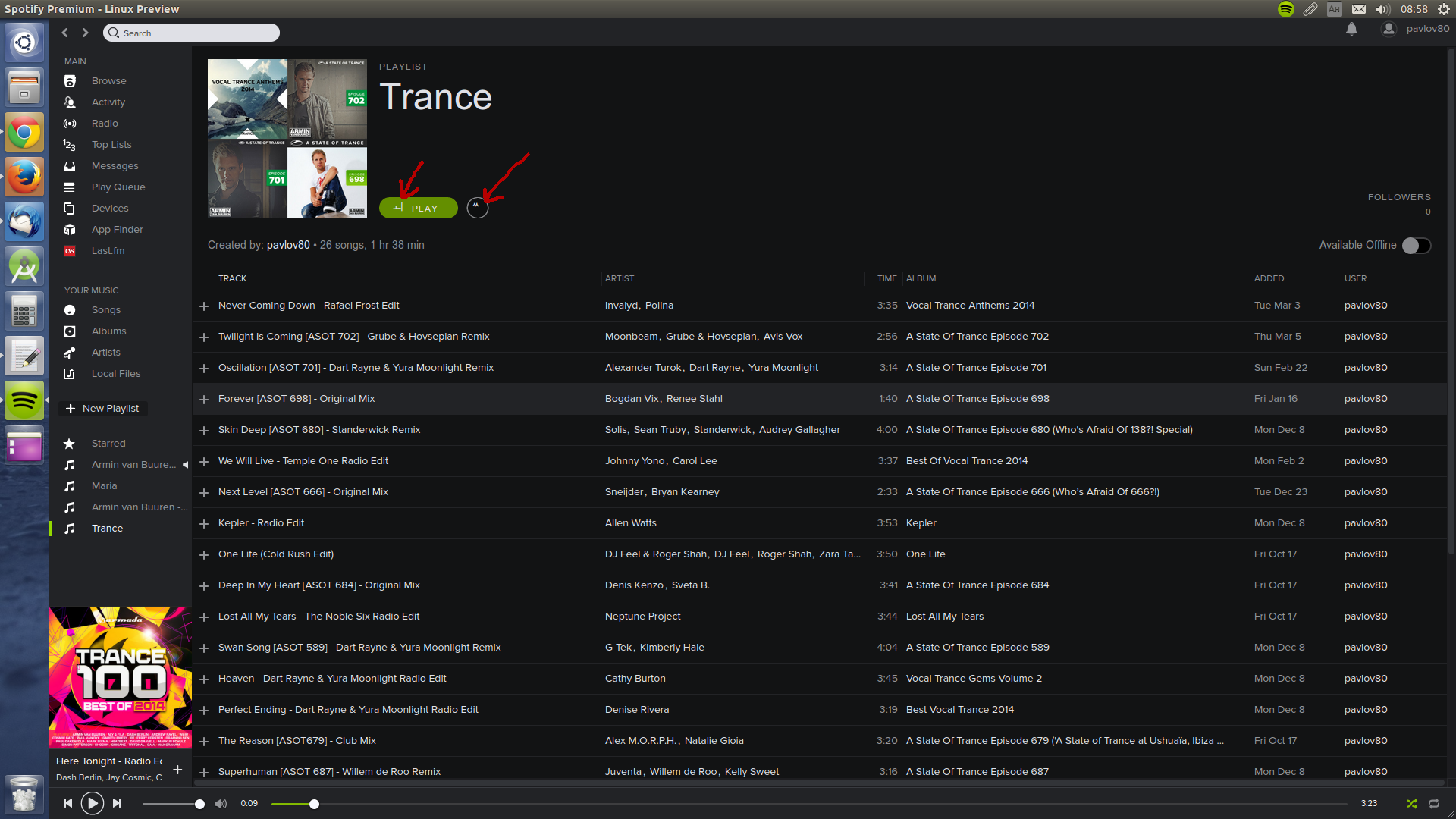 Rizzer
Gig Goer
Thank you for the increased Linux support.
Reply
1 Like

Thank you for this release. My first impressions so far,

Anyway, many thanks to @nikreiman  for starting this thread, and all the devs for making this improved Linux version. Very excited to learn that there will be more frequent attention to the Linux version going forward!


The new tray icon is too big for KDE enviroments. There's a way to force Spotify to select a smaller size?

The tray icon change only applies to version 0.9.17, not the 1.x beta. However if it is not working well with your desktop environment then you can go to /opt/spotify/spotify-client/Icons and manually remove the spotify-linux-512.png icon and symlink another one to that same name.