We want to let you know that the Windows Store version of Spotify for Windows 1.1.94 comes with its own Xbox Game Bar widget, seamlessly replacing the one you are used to.

To use the new Xbox Game Bar widget, you now always have to run Spotify for Windows on the same PC. It can however be minimized to the taskbar or even to the system tray if you select "Close button should minimize the Spotify Window" in Preferences. You can of course still play via Spotify Connect just like before.

Several bugs in the general user experience were fixed.

Why are we doing this?

The new version makes logging in much easier.

The new version is now shipped in tandem with Spotify for Windows on Microsoft Store, making it easier for us to ship further improvements to the experience.

If you used the Xbox Game Bar widget previously, you have granted it access to your account. This is no longer needed and you can now revoke it by pressing Remove Access on Xbox Game Bar here. 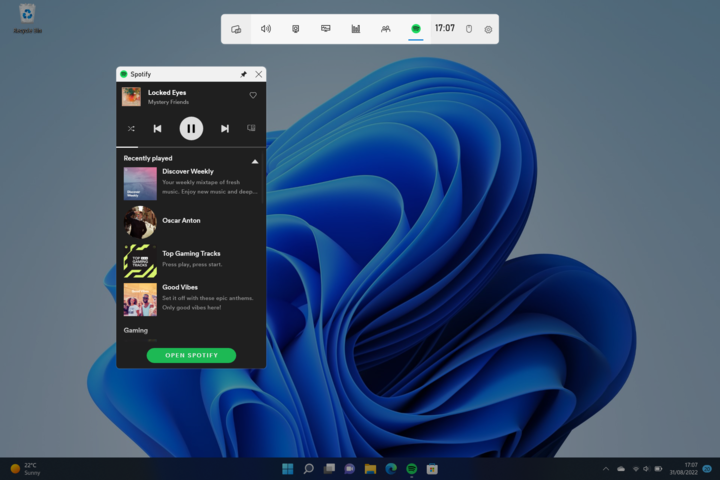 I see an error message telling me to install the Spotify Widget: Spotify needs to be installed from the Microsoft Store to include the Xbox Game Bar widget. If you previously had downloaded Spotify via spotify.com, you will still have your settings, downloaded music and podcasts available to you.

I see two Spotify Widgets: We're aware of this but it should be a very temporary phenomenon. The old widget will disappear after a while.

The widget is stuck on the 'Start listening' screen: The Desktop app needs to be running, clicking the “Start Listening” button will launch it. If you are not logged into the Desktop app you will need to login and then bring the Game Bar up again with the Windows + G key command.