Having a home screen widget for Android would be really nice. All other media players have one on Android so it'd be great to see that in Spotify too. It'd make things so much easier to just be able control to Spotify from your home screen instead of swiping down for the notification bar or opening the app. It's really simple functionality so please can you add it.

Thanks for sharing your thoughts on this idea in the Community.

We’re excited to let you know the Android Widget is back. To get listening, make sure you’re on the latest version of the app and Spotify will show in the widget menu on your device. The widget is now resizable too and some stability issues have been fixed. 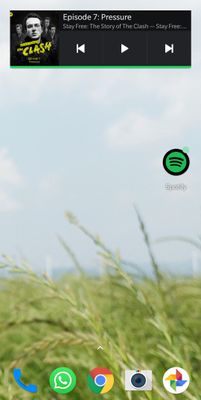 We appreciate your passion for this feature and want to thank you all for your feedback!

I've waited countless E-mails to see this finally happen. I can finally unsubscribe from this non-stop E-mail chai

Thanks for bringing it back but this shouldn't have happened in the first place.

That's weird that it is that slow. There must be something wrong with your setup, device or network. If it was really a spotify issue everybody would complain which is not the case.

There must be some way to fix your issue. Please create a new topic in the help section of this community, we should be able to fix this.

Thank you Spotify for bringing back one of the most useful parts of spotify.

@virdoz my daughters phone had the same issue, I fixed it by going into spotify settings and deleting the cache. Maybe that will help if you still want to use spotify.

Shinsei-Red
Newbie
YES! Thank you very much for your understanding! 🙂

While I'm happy with the results I have to say that the way you handled communication with your customer base is disgraceful. While I'll be keeping my payed accounts for now, if such an incident will happen in the future I'll be canceling my accounts on the spot.

Learn or hire people who know how to treat customers respectfully!

It's back... but when I push play on it when the app is not running it doesn't start to play anything, it opens the home screen of the spotify app, and i have to find the play button there. How useless... even the shortcut i made with "Automate" when the old wizard disappeared to play/pause immediately starts playing, and your own widget is unable to.

Ya the widget is back, what a great community this is!! 😄    And thank you for listening to us and bringing it back Spotify, so cool!!

hendersj
Casual Listener
Strange that it doesn't start for you - I just tried it, and the first tap
of the play button on the widget took a second for the app to launch, but
it launched in the background and started playing. Just took a second
after I hit play in the widget.