Wow this wrapped really blow my mind Thanks Spotify For my .Wrapped 2019 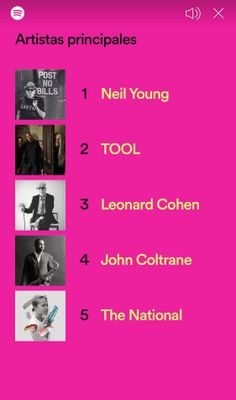 JpgchiefRock Star 14
Help others find this answer and click "Accept as Solution".
If you appreciate my answer, maybe give me a Like.
Note: I'm not a Spotify employee.
Labels:
Reply
4 Likes
Reply
Topic Options
15 Replies 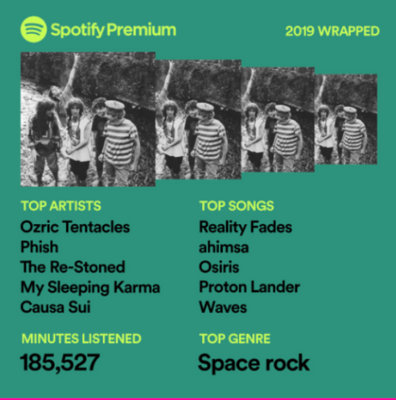 TreyAnastasioSpotify Star
Help others find this answer and click "Accept as Solution".
If you appreciate my answer, maybe give me a Like.
Note: I'm not a Spotify employee.
Reply
5 Likes

Heres my spotify wrapped up

Here's mine. The animated thing that played pieces of songs that I listened to was kind of cool, but the playlist was pretty much just like My "On Repeat" or my "Repeat Rewind" playlist. I don't like how Spotify caled me genre-fluid, though. They must have mistaken me for a left listener. 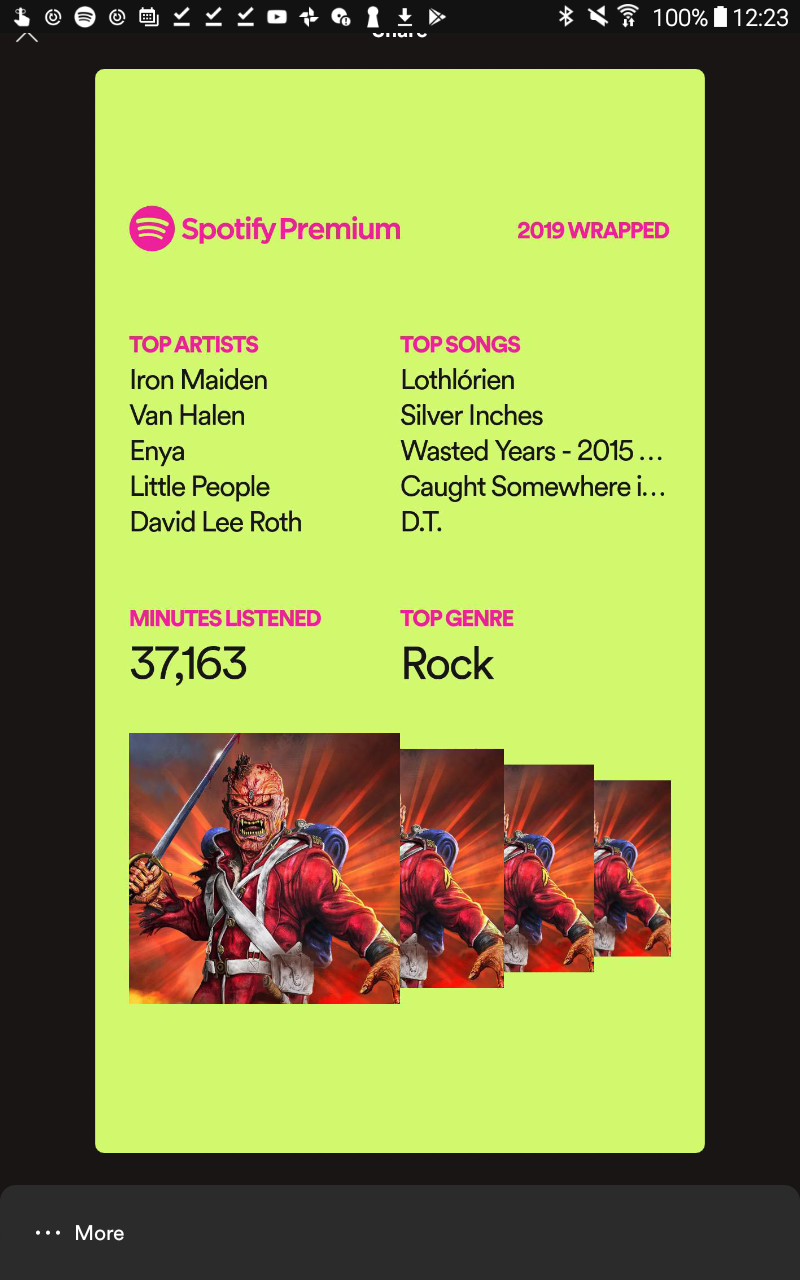 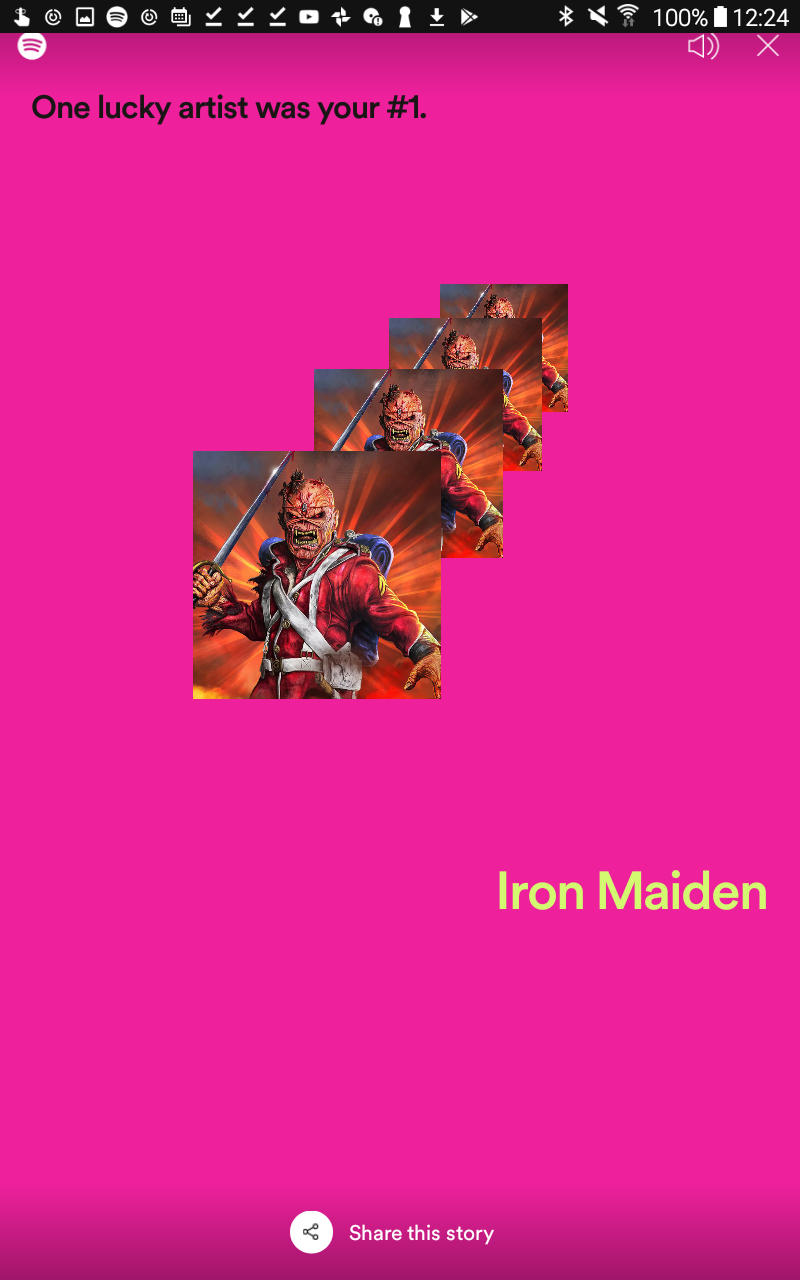 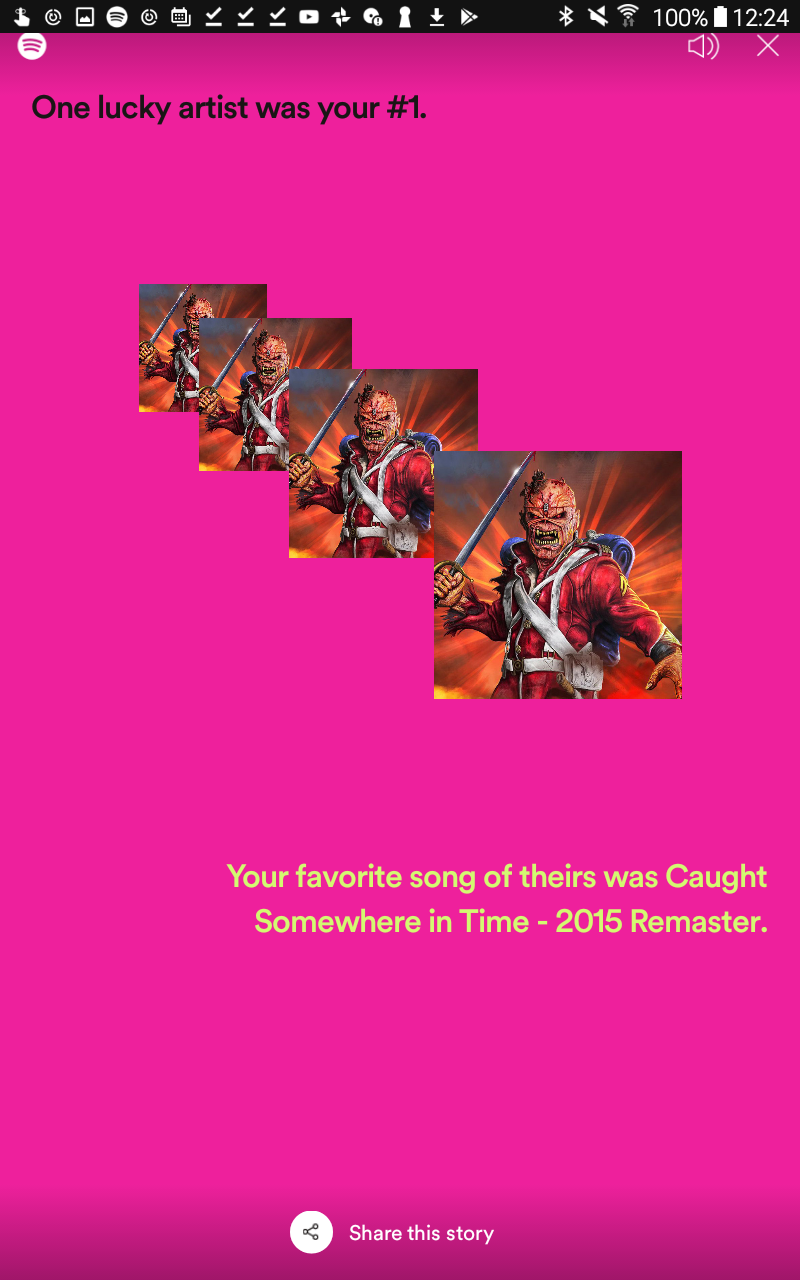 @MadmanOnWheels, you'll need to make screenshots of these instead of sharing the link because all links direct to their own 2019 Wrapped stats. 🙂

I love how they incorporated music in addition to the visuals. My seasons sounded awesome AF :')

About genres... No surprises on my end (and I am also genre-fluid), but my mother got "Adult Standards" as a genre. I... have questions.

SebastySpotify Star
Help others find this answer and click "Accept as Solution".
If you appreciate my answer, maybe give me a Like.
Note: I'm not a Spotify employee.
Reply
2 Likes

Your wrapped up looks good, mine was basically all shawn mendes, when I went through the season, it was playing "If I Can't Have You" by shawn mendes, each time

my top ten tracks consisted of 8 tracks by Shawn mendes, one by Panic at the disco, and the other one by Jay putty

Let me take a small look what the exact tracks were...

Summer: spotify:track:4yle2zhsqgNb1pp3tP8qje:small
Fall: spotify:track:35xuD0tc7KrUxgLvYtOKKw:small  (and the site even played the really sweet part of the track too!)

10. spotify:track:43vBuonU6UgCHd92VSz52z:small (the same track which is at the top with well over 200 plays over at my last.fm)

Last.fm comes out with the yearly statistics on the first or second Thursday in January, so that would also count in that Deru surge I'm currently at. :')

Track to describe my music stats - that sixth one... 😄

SebastySpotify Star
Help others find this answer and click "Accept as Solution".
If you appreciate my answer, maybe give me a Like.
Note: I'm not a Spotify employee.
Reply
1 Like

My top ten tracks were:

Is Shawn Mendes your favourite artist? 🙂

I listened to radio at work and heard Señorita quite a lot... Once every hour in fact lol. I would say it's one of the nicer-sounding tracks I heard being played.
I am not a fan of modern rap at all though and I had to endure quite a lot of that as well.

SebastySpotify Star
Help others find this answer and click "Accept as Solution".
If you appreciate my answer, maybe give me a Like.
Note: I'm not a Spotify employee.
Reply
1 Like

hes not now really, I like James TW, and other artist, this happened ever since shawn mendes started to date camila cabello

yeah, I remember listening to senorita on repeat for like 5 hours straight, yes i know, im weird.

This playlist is so different to last year playlist as it consists of lots more shawn mendes song rather than other artists.

Re: genre fluidity - I was actually quite pleasantly surprised by the way it broke down my pop addiction into sub-genres which I would say are pretty representative of the different types of pop music I listened to this year:

I'm not sure where Spotify gets its metadata from with regard to genres/sub-genres, but this is my attempt at a break-down of the above based on my listening between January 1st and October 31st:

Pop rap:
1. Ed Sheeran's No.6 Collaborations Project, although the album is mostly trap- and RnB-heavy
2. Khalid - again, more groove/soul/RnB than rap, but probably still falls under pop rap
3. Alec Benjamin - even if you don't count his cover of Eminem's 'Stan' for Spotify Singles, he's very lyrics-oriented and has some incredible flows

Eletcropop:
1. A R I Z O N A - these guys are the purest embodiment of this genre from among the artists in my personal listening history, at least the way I interpret it

2. Maggie Rogers - her roots are in country/indie folk, but her debut album which dropped in January is deeply electronic

3. LANY/Lauv/Chelsea Cutler/Jeremy Zucker/Julia Michaels - all of these bands have a very similar synthy sound to them

1. Maggie Rogers - Alaska, her breakout single, marks a kind of transition from her  folk sensibility to something more electro-oriented

2. John Mayer - I was working through his back catalogue throughout the summer and autumn, but some of his newer stuff is also quite folksy

3. James Bay - in particular the Oh My Messy Mind EP, which is a return to his folk singer-songwriter roots from the pre-Hold Back The River days

Pop: a mixture of all of the above, plus Tom Odell, David Gray, George Ezra

Modern Rock: not too sure really... maybe Mumford and Sons's Delta snuck in there?

Anyway, here's my Wrapped 2019 if you feel like checking it out:

here's what my gender fluidity was:

Alright, Sebasty, I'll try that. When I posted the links in the e-mail, before I sent it, they showed up as images (below). I thought they were going to work.

@K-I-M I love love love Alec Benjamin - looking forward to new music from him in the new year, fingers crossed!

hes one of my fav as well  @Peter, which song is your fav, mine is "Must of Been the Wind"