The most famous electric guitar (besides the Gibson Les Paul) has inspired many guitar-players since Leo Fender invented it in 1954.

What makes the Stratocaster special?

It was one of the first electric guitars and introduced many new design features. Basing on the equally legendary Telecaster Leo Fender invented here a contoured body for more comfort, three Pick-ups for more tonal flexibility and a new vibrato system. It is one of the most successful models in the history of the electric guitar. It was very much pushed to success, because many famous players used it. The look was influenced by american cars and mirrored the typical 50 design. From its rise in the 50s and 60s to presence the Stratocaster is still one of the most important guitar-models.

What's the difference between a Stratocaster and a Les Paul regarding the sound?

This is hard to explain, because depending on the amplifier a Stratocaster can sound like a Les Paul (or very close) and vice versa. But if the amplification supports the character of the model I would say

If you compare them to acoustic guitars the Stratocaster would be the equivalent to an acoustic steel-string, while the Les Paul is more like a Jazz-Archtop

If you think on Strat-players Jimi Hendrix comes to mind at first, but do you know more of them?

I will add your contributions to this playlist:

A friend of mine just co-wrote a very cool history of the electric guitar called Play It Loud. There's a whole section on the Strat and its key players. I'll pull it and list some.

I am looking forward to it. There are many phantastic Strat-players, which are less known

Ah, yeah a couple of strat guitar players come to mind, the first one is a classic blues/hard rock/folk guitar player Ritchie Blackmore:

Many songs to chose from the guitar player. But a classic will work I think: 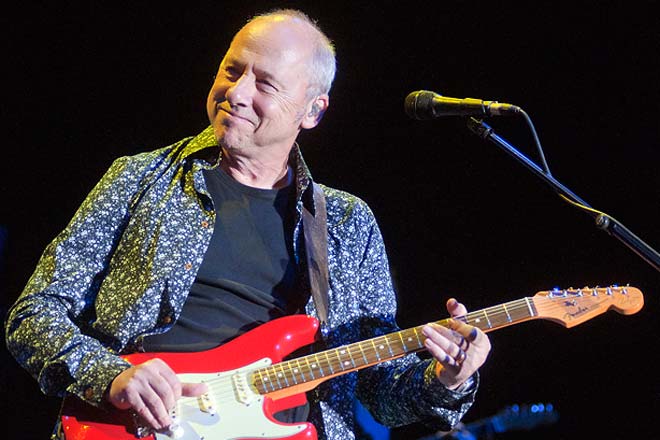 I think I will stop here, and leave some for others to post. 🙂

@user-removed You have named already many famous players and great choices of tracks. I had also choosen "Black star" by Malmsteen, because his debut is still his best record. I hope you  don't mind, that I have exchanged two tracks for the playlist. I think the electric version of Layla is the better choice for the Strat-playlist and you have confused David Gilmore and David Gilmour, btw David Gilmore seems to be a decent Jazz-cat. 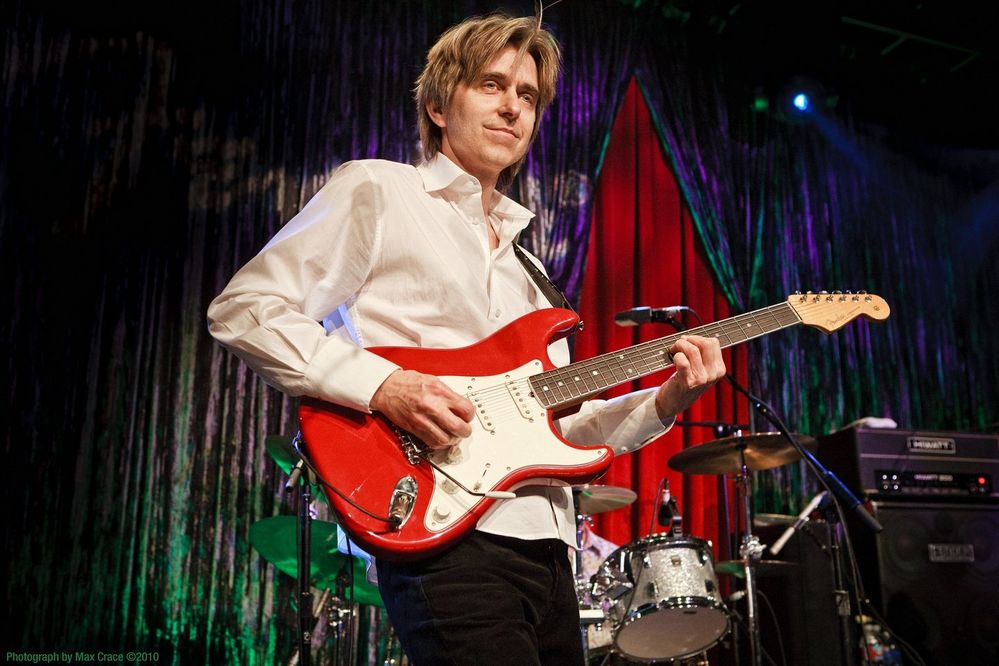 I want to introduce a lesser-known Strat-player: Eric Johnson. Though he started his career in 1968 he reached a wider audience with his 1990 album "Ah via musicom" and the hit "Cliffs of dover". Later he joined the guitar-wizard show "G3" with Steve Vai and Joe Satriani. He is known for his violin-like tone on his Fender signature-model and an original 1957 Strat. He must be a perfectionist, because he is likes to discuss the tonal effect of different batteries in effect-pedals.

In cliffs of dover he used a Strat and a Gibson 335 alternately.

Yeah that is fine, oops typed to fast, should have double checked the tracks chosen with each artist.

Edited to add: with David GILMOUR, and Mark Knopfler, I was trying to stick with their solo content, as they are better known by their own famous band work with Floyd and Dire Straits respectively. So you can pick a Gilmour solo artist song you think fits the flow of your playlist, if you want to from his artist page.

Finally dug out my copy of Play It Loud, so here we go ...

The Who's Pete Townsend used Strats live throughout the '60s and probably played one on "I Can See for Miles." He definitely used a 1957 Strat on several tracks on Quadrophenia, including "Doctor Jimmy."
spotify:track:4SHTUMfbJbuK8TxMrExKrJ

In addition to the guitars already mentioned, Buddy Holly, Ritchie Valens, Buddy Guy and Jeff Beck have been known as Strat players. In fact, Buddy was playing a Strat when he and the Crickets played The Ed Sullivan Show.

Found a good article on Strat history, which mentions a whole bunch of records, including the following:

Ah yeah, forgot about Jeff Beck when I was typing up my post. It was there in the back of mind when adding Clapton to my post, the Clapton / Beck connection through The Yardbirds days connection was there somewhere.

Slipped my mind about Buddy Holly as well, should have remembered that one as well, that Ed Sullivan show clip of Buddy Holly and The Crickets playing That'll Be The Day, I must have seen that show clip many times over my lifetime.

@brian_mansfield Two of your additions are most interesting: Pete Townshend was known for playing Gibson SG and Deluxe during the classic Who-years. I first saw him with a Stratocaster, when he played the last reunion/anniversary tours. I really wonder, that he used a Stratocaster on "Quadrophenia". Second Kurt Cobain is more known for using a Fender Jaguar.

All your suggestions are on the playlist

Normally Jimmy Page is identified with his beautiful Gibson Les Paul Standards, but he played also Stratocaster occasionally, for an example on "In the evening".  You can hear the use of the Vibrato-system. This had been not possible on a Les Paul.

What's the difference in sound between the stratocaster and the Gibson les paul? What's so special about the Fender stratocaster? I think this should have been mentioned in the o.p. topic. 🙂

@Jazzwhatever Thank you for the suggestion. I will try to explain it in the o.p.

I think of Townsend more with the SGs (and, in the early days, Rickenbackers), @heartscore. And the Strats seemed to have been more road instruments than studio ones for him. But he's quoted in Play It Loud as saying he was playing a Strat when Hendrix showed up in England with his Strat. And there's a great rundown of all the equipment Townsend has used through the years. That's where I got the information on the Quadrophenia Strat. (For most of Quadrophenia, Townsend used a 1959 Gretsch 6120 Chet Atkins Hollow Body he got from Joe Walsh — same guitar used on "Won't Get Fooled Again.")

As for Cobain, it's my understanding he didn't play that particular Strat beyond "Endless, Nameless" — because he left it in pieces!

@brian_mansfield I know the story about that Gretsch. He never (seldomly?) used one live, so everybody wonders, that he recorded most songs in the studio with it. I think he switched live in the beginning of the 70s from SGs to Les Paul Deluxe as his main Live-guitar according to the Who-homepage. If I imagine Townshend playing live The SG and Rickenbacker represent the 60s, Les Paul Deluxe for70s and Stratocaster for everything past 1990. 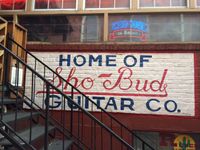 BTW, Eric Clapton bought the Strat that Townsend played on Quadrophenia at Sho-Bud in Nashville. I think I'm just across the alley from that location now.

Enlight_Ingress
Newbie
One of my favorites is Billie Joe Armstrong of Feb Day. He is a stratocaster that he calls Blue. He got it for his 11th birthday. 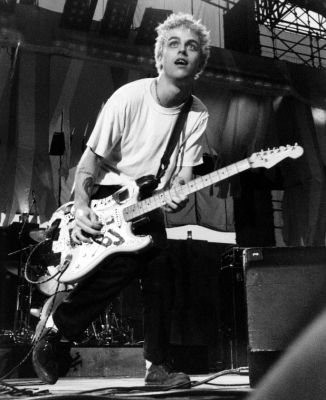 @Enlight_Ingress Thank you for the contribution! I added "Basket case" to the playlist and found an interesting article about Billy's gear 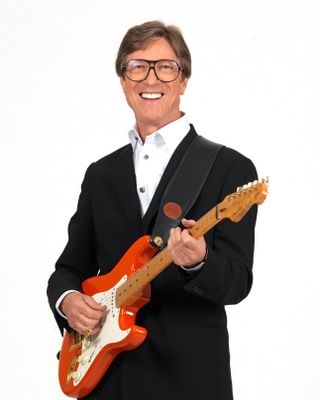 Hank Marvin is famous for is Strat-work with his band The Shadows" and responsible for many instrumental hits like "Apache". His clean sound and the use of the Tremolo-arm are important ingredients of his style. Fender honored him with a signature model. He owned a Fender Stratocaster since 1959, a donation of Cliff Richard (think on how much an original Strat from 1959 costs today), but played guitars of the english company Burns until four of his Burns-#guitars were stolen in 1970. He remembered then on the Stratocaster and never looked back.