In Windows 10 Mobile Spotify app I am only able to play music if it is downloaded and Spotify is in Offline mode.

If I'm not in Offline mode (even if songs are downloaded) player just loads for somewhile (photo) and then nothing happens.

Is this an already known bug and you are working on it?

Do you have suggestion how to make it work? 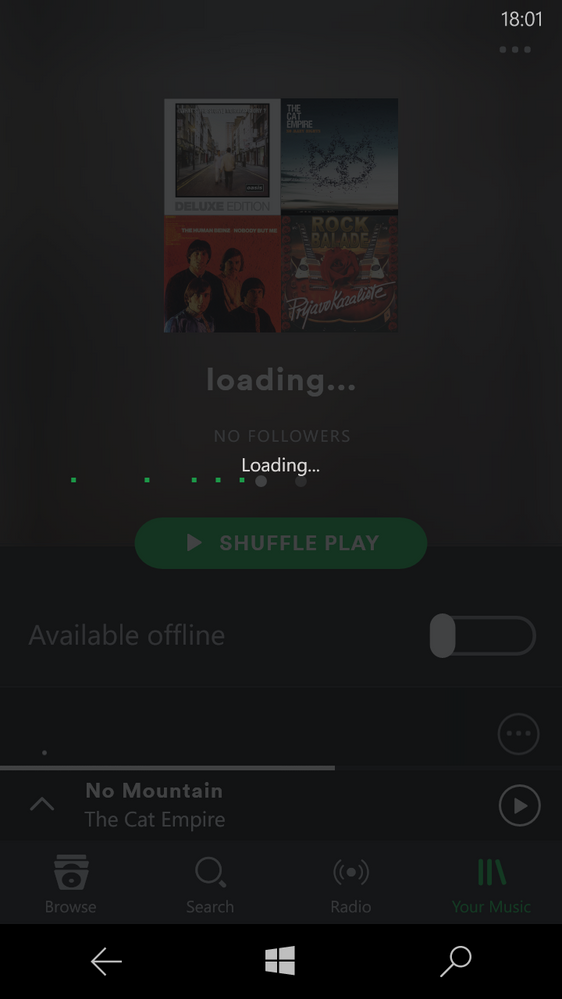 I can confirm, on cellular it just says loading every 20 seconds or so, and acts as if the connection drops (it really doesn't) and yet on Wi-Fi it works flawlessly. The problem may very well be the fact that this is not a UWP app.

You need to remove the app, reboot and re-install it again from the store. That fixes the problem temporarily.

nanoguy
Regular
Tried and doesn't work on both a Lumia 930 and Lumia 735, running the latest supported version of Windows 10 Mobile. The fact is that Spotify has announced that they have "ceased" development, which could mean one of two things. One, that they don't care and are throwing us Windows phone users under the bus, or hopefully two - that they are working on a proper UWP app. After all, they just have to wrap the same HTML5 and Javascript code from the desktop app into an .appx package. What very few people know is that Microsoft made sure to allow ceva to use almost any mainstream programming language to build a Windows app, but since the media makes sure to praise almighty Apple and Google and trash Microsoft, Amazon, Facebook and others, you can see one of the main reasons why ceva are so reluctant.
Reply
0 Likes
user-removed
Not applicable

even the unofficial tidal app for windows mobile is leagues ahead of the unmaintained broken spotify app.

Thanks for pitching in, but it doesn't work, and Edge has nothing to do with it. If anyone from Spotify catches this, I hope you at least ping your devs to fix this one bug that makes Spotify totally useless. There's always Deezer if they think we should be ignored.