3G data turned off but still being used

3G data turned off but still being used

figflower
Regular
Hi. This morning I set several albums to download ie make them offline. I was connected to my WiFi network. I thought it was strange when the third album got stuck at 16% then later I got an email from my telephone provider to say I'd used all my data allowance. I checked the 3G settings in the Spotify app which indicated that downloading over 2G/3G is off. What's going on? I thought by keeping that at the default setting Spotify wouldn't download over 3G especially as I was connected to my home WiFi.
Labels:
Reply
0 Likes
Reply
Topic Options
11 Replies

Joe
Community Legend
The android OS should always use wifi in preference to mobile data, irrespective of what settings you have in the spotify app so I would guess that maybe something else is responsible. What does your data usage chart look like? (android settings/data usage)
Reply
0 Likes

Thanks. I just checked the mobile data usage in the settings. There's a big spike today and the top app on the list is Spotify with 199MB. See attached screen shot. It's strange because I was at home near the WiFi router when using the Spotify app to download so plenty of WiFi signal. Not only that ... If I wasn't close and 3G had kicked in the Spotify app settings should have protected me. 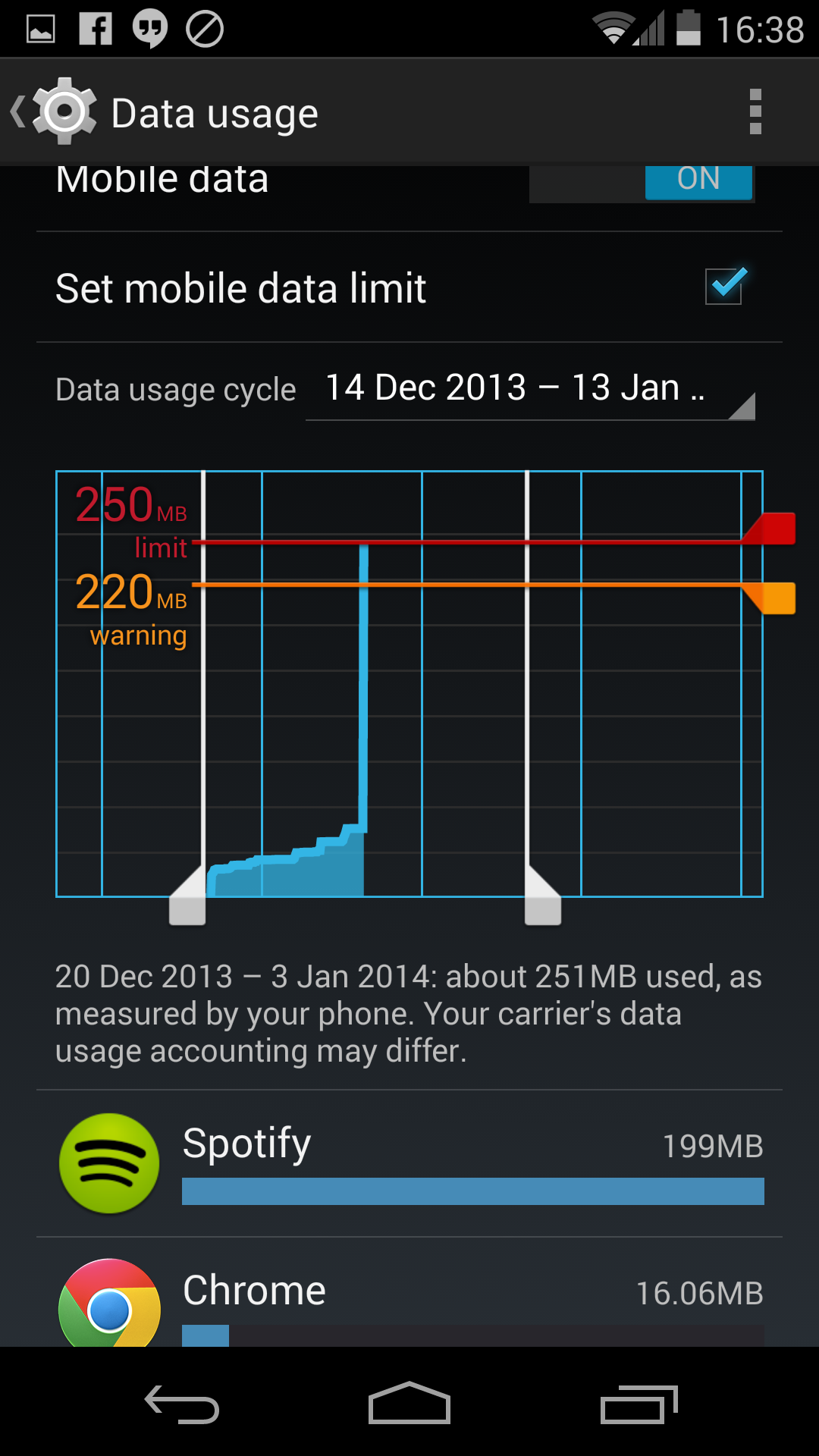 Thanks. That fits in perfectly with what you said and yes, you're right about the download over 2g/3g option. If you could let me knpw what mobile device you're using and you android and spotify versions, we'll try some troubleshooting.

OK. Could you please delete the spotify cache from the spotify options then uninstall and reinstall the app. Once done, you'll need to recheck the options and make sure that download over 2G/3G is off. Next, turn off the phone's mobile data, double check that you have a valid wireless conection and try downloading some music.

Let me know how that goes.

figflower
Regular
Hi. I did what you asked. Albums are downloading over WiFi with the phone's mobile data disabled as well as the Spotify app 3G being disabled.
Reply
0 Likes

That's great. Next try turning mobile data back on and download some more music - you may want to set your data limit really low first so it triggers a warning if spotify decides to use what little is left of your mobile data allowance. I'm hoping it won't happen and that the app reinstall has fixed things but better safe than sorry.

Assuming that goes OK, tha last thing to try is to turn the mobile's wireless off and with "download over 2g/3g" still disabled in the app, try to download one track. Hopefully it will sit there doing nothing (crosses fingers).

figflower
Regular
Hi thanks I will try that but in a no 3G area at the moment.
Reply
0 Likes

Hi. I've managed to try things as you suggest. With mobile data and WiFi enabled I've download several albums. Then I switched WiFi off and tried downloading some more. The Spotify app told me to enable 2G/3G in order to sync music. So that looks like it's working now.

Something I noticed in the Android Mobile Data usage settings page is the Spotify app is listed as having used 156Kb foreground data today and 11.01Kb background data. See pic attached. I haven't had 2G/3G enabled at all so I was a little surprised. So I tried switching off WiFi again and downloading tracks (both by going into a playlist and switching offline from off to on, and by the other way by pressing the grey corner triangle on the lower right of the playlist's entry in the list of playlists, then pressing 'Download') and everything still ok, no 2G/3G used for downloading music. Going back to the data usage of Spotify in the Android Mobile Data usage page I can see that's increased to 416Kb. So, I guess it's still using mobile data for usage stats etc. That page has a check box for preventing Spotify from using any mobile data so I'm going to tick that.

Thanks for all your help. I don't think we've got to the bottom of what actually happened. Perhaps reinstalling did the trick, but I had only installed Spotify a week ago anyway as this is a new phone. The version of the reinstalled app is the same as the one I installed a week ago. In any case, the Spotify app seems to be working properly and I've learnt how, using Android itself, to prevent Spotify from using ANY 2G/3G. 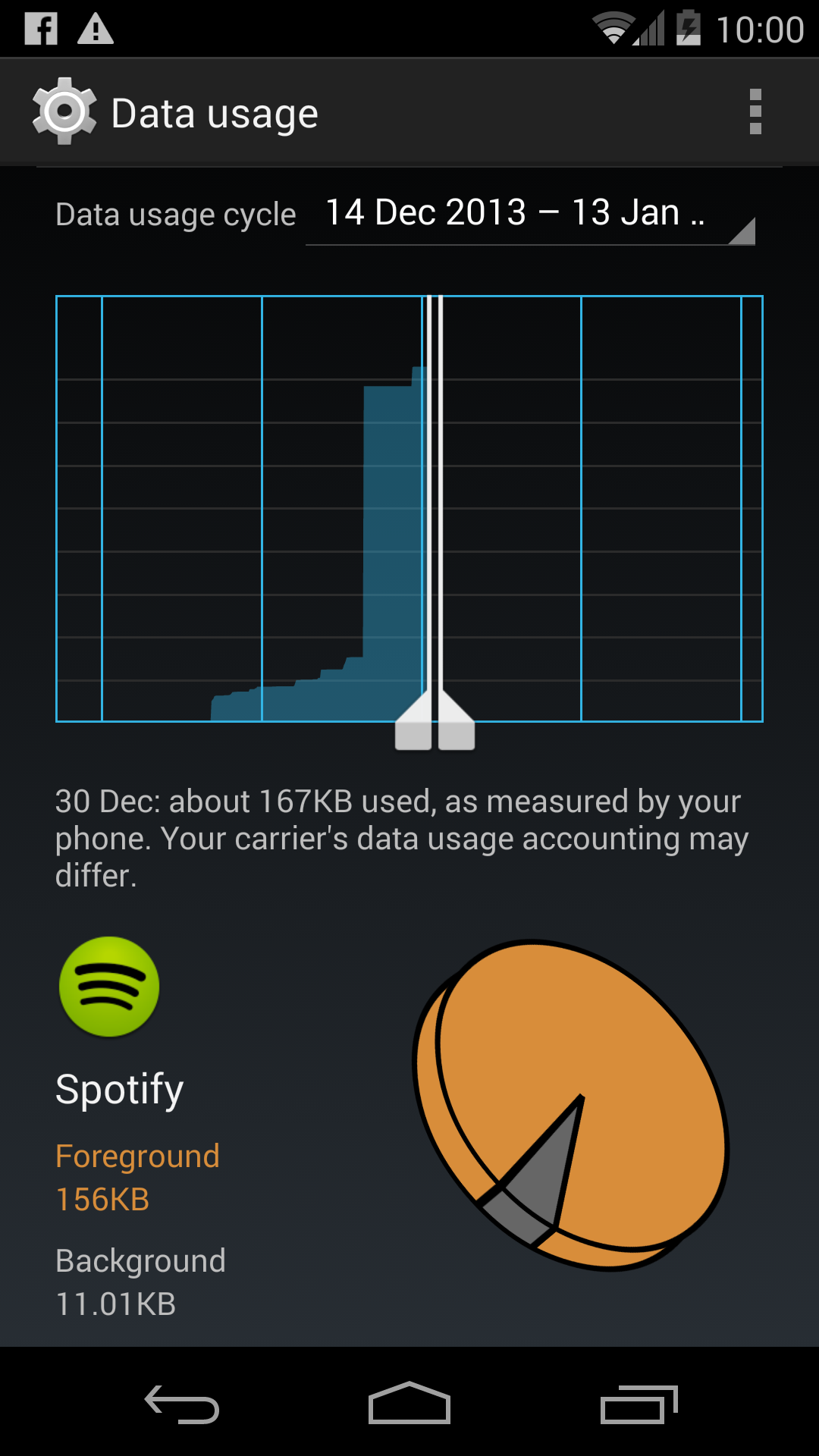 Ha. The Android check box didn't prevent Spotify streaming over 3G. So Android's either broken there or Spotify gets around the setting somehow.

It would be nice if the Spotify app could either have a setting for disabling streaming over 3G or pop up a warning when you attempt it. Perhaps each time the play queue goes from empty to having something in it (so not every time something is added to the play queue).

Joe
Community Legend
Awesome work by you :) Background connections are used for some things you can turn off in the spotify settings - scrobbling to facebook and last.fm and the push notifications but it does also send usage stats from time to time. The only way to stop this would be to turn off mobile data on the phone.Overall, I think you have it pretty much under control now. It does seem a pity that we can't just have the equivalent of an aeroplane mode button in Spotify though. Thanks for your patience - have a great New Year!
Reply
1 Like