'Got it we won't play that song again'

'Got it we won't play that song again'

JohnVuojo
Regular
So, here's the problem. I was listening to the Daily Mix and I accidentally pressed the button that apparently tells Spotify I don't want to hear that song again, which is unfortunate considering I actually like that song quite much and would in fact like to hear it come up in the future.

My question is: Can this mistake be reversed or have I permanently screwed with some algorithm that will now send a comet to destroy the planet?

P.S.: The thing about a comet was a joke.

Just hit the same problem. I wasn't sure what the button did when I pressed it. Would have expected a confirmation dialog for actions of this magnitude!

JohnVuojo
Regular
I'm fairly sure it's the circle with a line going through it. Here's a screenshot. 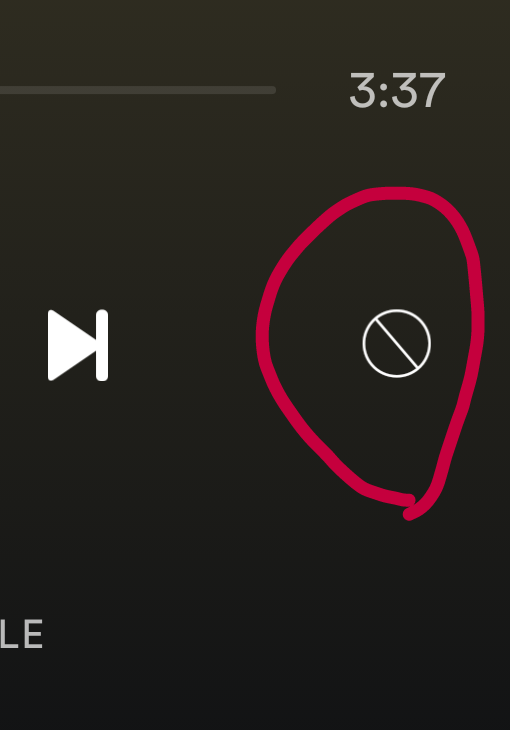 I'm afraid there's no way to undo removal of a song from your mixtape currently.

I've got the same issue finding my little daughter playing with my phone. Some great tracks just got banned. ; - (

JohnVuojo
Regular
Don't worry about it. I found that it only applies to that particular 'Mix', from which they were removed from and removed songs do in fact appear again, provided your listening habbits don't change dramatically.
Reply
1 Like

Will this be fixed in a future update? This happened to me as well.

Angel86
Newbie
Do we still have that problem? No way to undone?
Reply
4 Likes

AMP6
Newbie
Totally agree - this button is way too easy to hit and it's not clear what it does. Should be a way to undo.
Reply
17 Likes

I wished I had this button, though. But for some reason I don't have it on the PC client.

TonyJWU
Newbie
What if I don't know the song title because when it showed up on my daily list it was something I wanted to add to my starred but then hit that button instead?
Reply
21 Likes

Couldn't find the "allow to play this" option in the 3 dots.  Do u have a sample screen capture of this?