New tracks that I add to playlists on my computer which I have stored on my computer are not being synced to my phone (Nexus 4) they're just grayed out. The phone is showing up in devices and all my other tracks which have synced successfully over the time I've been using the app still work fine I just can't get any new files on. Under the devices section is just says pending on local files also I am receiving "Only Premium users can download music to listen offline. Upgrade now." messages whenever I try to download a playlist but this never used to be a problem. I've attached an image of my devices tab. 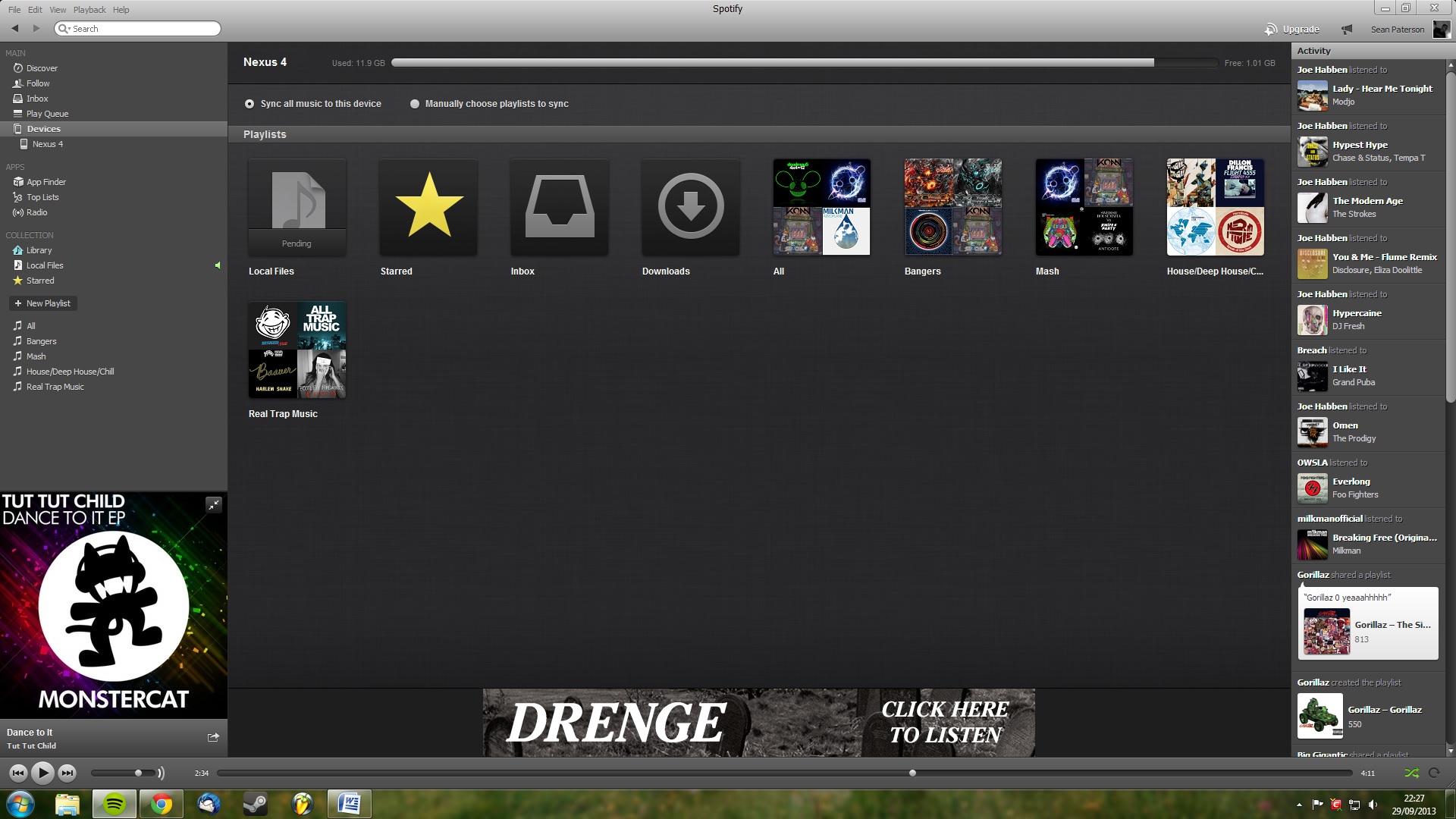 Hi. Can you try freeing up some space on your Nexus and see if that helps. The image shows you have 1GB of free space left which might be stopping more tracks from synching.

Tried deleting some stuff and managed to get my free space down to 1.6gb still no luck syncing tracks though, any ideas?

Strange. Could you post a link to the playlist which won't synch - right click on it and copy the spotify URI>

Here you go: Mash. There are others I want to sync properly as well but I want this one the most. None of them will sync at all.

500 tracks at high quality (320 kbbs) may not fit into the space you have available. What happens it you copy, say, 50 tracks into a new playlist and try to synch that?

I've been using the app for a long time and it has work for all the time up until now so about 460 of the 475 tracks are already synced its just the new ones I've added won't sync. Could this be to do with the recent update?

I've never had these issues with spotify on my android devices but it seems unlikely to be caused by the recent update or we'd be seeing far more reports here. A clean reinstall may fix this for you but I'm hesitant to suggest it as you'll need to resynch everything.

That's my worry I don't want to reinstall and then it not sync again which would put me in an even worse situation. I think I'll have to give it a go though. Thanks for your help!

I have the exact same problem – managed to find a solution?

This was bugging me too. I dont know if this will work for you guys but this is what I did:

I have the same problem on iOS. I've tried reinstallation on both the phone and desktop (Mac OS X) and from what I can tell, it definitely has something to do with files that are linked on Spotify. I have the Beatles' box set from the iTunes store, and it syncs perfectly as it's not available on Spotify. But many of the files in the Led Zeppelin box set, which I have also purchased in iTunes, fails to sync at all.

I notice that the files that won't sync are the ones that Spotify has linked (both the album and artist are bright white in the desktop client). If I watch the playlist on the phone while it's trying to sync, it tries to sync the files for a while (the spinning .gif appears next to the track) but eventually times out. Then, the small dark down arrow disappears from that track and it never tries to sync it again.

Many times, when trying to sync playlists of local files, a message pops up on the phone telling me I need to upgrade to Premium to download playlists.

I have a feeling that Spotify has just really screwed up the logic for determining what is a local file and what isn't. I love the idea of Spotify, but more and more I just see that they don't have it together when it comes to the client side. Buggy as hell, missing features, inappropriate features, confusing UI. It's just horrible.

It was my initial intention to buy a Premium subscription, but Spotify has just screwed it all up so badly that I'm holding off, maybe permanently.

im having the same problem with this playlist https://open.spotify.com/user/22owma34hguv4mesqxt4svwgy/playlist/5b9eE89g7hH6PznU6i5hRI