The background pictures of artists which have featured on big-screen TV apps since a software update late last year are in some cases badly chosen, badly positioned and very badly cropped.

This is unprofessional and gives the impression that no one at Spotify cares enough about the app's presentation or the artists featured to spend any time or effort on the image selection.

I'm in my 60s and many of my musical choices go back 40, 50 years or more. I've noticed that more of the artists from this era have poor images than more recent names. Maybe Spotify thinks that not enough members of my generation are signed up to be worth bothering with.

In cases where the artist is too obscure for Spotify to have found an image, the presentation reverts to the old system of a larger album cover with a toning colour in the background. I prefer this to the amateurish picture selections like those I highlight below.

DALE WATSON: extreme close-up might work if not for album cover covering his nostrils

THE CLASH: fourth member of band cropped out of existence on left despite huge space on right

WISHBONE ASH: only two members of a four-piece band appear in a badly cropped image

WEATHER REPORT: two faces from band that varied between five and eight members. Plus one nose!

CAMEL: words are inadequate to express just how poor this image is! A large blank space is featured while three members of the band are only partly in the picture

FREE: Only one face of four and the top of the guitarist Paul Kossoff’s head

LITTLE FEAT: Only four faces from a six-member band, but more importantly this late line-up with afemale singer is not representative. All of their best work was long ago with the late Lowell Georgesinging. No one who knows the first thing about Little Feat can have chosen this picture

THE YARDBIRDS: would be OK if there were only three of them. But there were always five

ROBERT PLANT: I think some wisps of Robert's hair are visible bottom right.  Otherwise it seems to be a random bit of wall!

POPS STAPLES: acres of the space on the right when the cover and title are right over his face

BILL FRISELL: no image of Bill. Just his name badly cropped below the middle of an unknown word. Probably “Valentine”. Sigh... 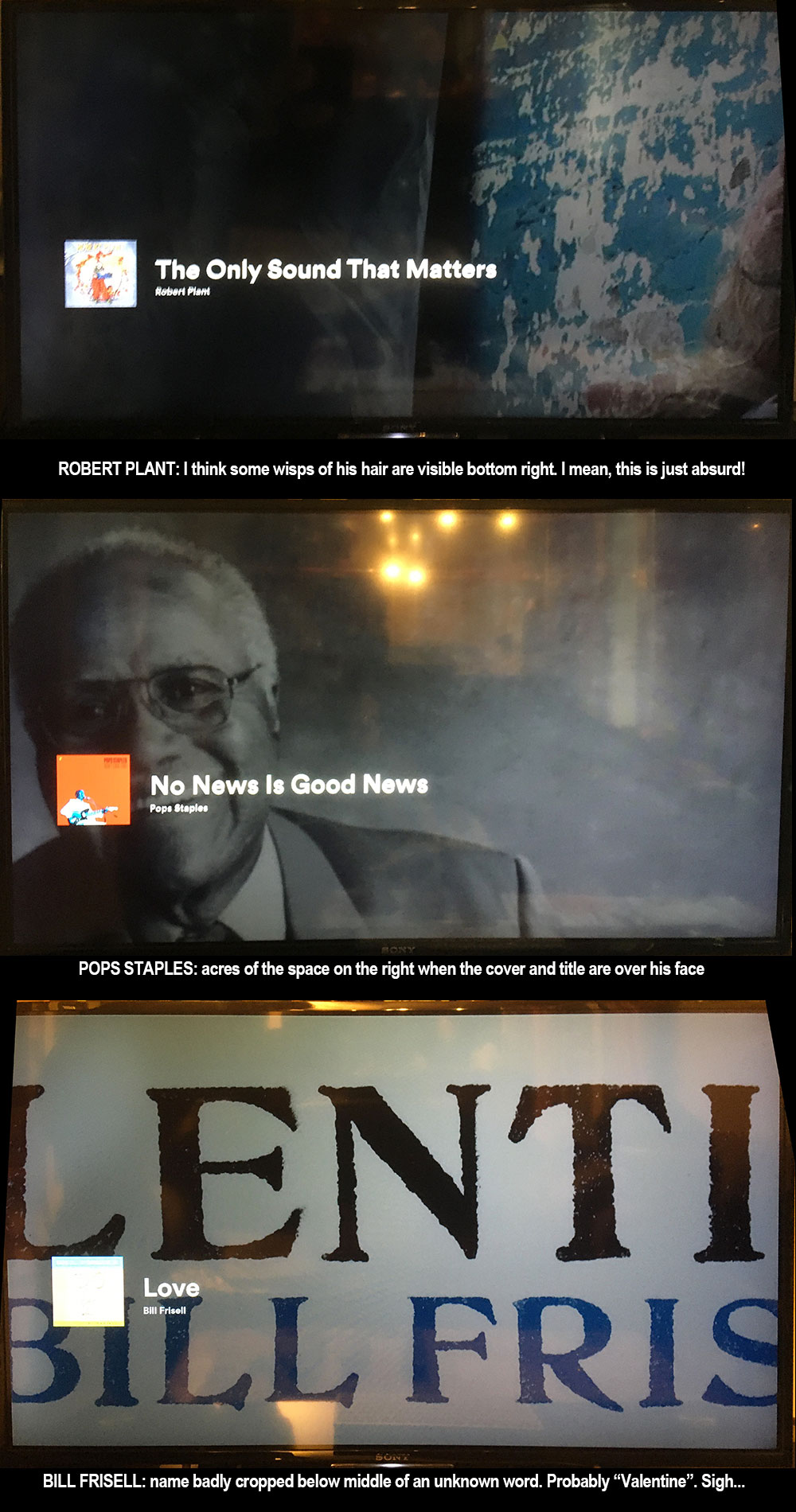 Update: this item of mine should be listed under Big Screen instead of Android . The OS of my TV boxes is in fact Android, but this category is otherwise full of people talking about phones and tablets.

There is no Big Screen option when you add a topic even though some posts carry that tag. My two previous posts about big screen problems had the Big Screen category added by admins after I posted them. That has not happened with this one to date.

We're sorry to hear that your experience with some of the artists' images hasn't been as expected. We really appreciate your feedback and we'll make sure to pass it on the right folks.

We always take new ideas and feedback into consideration to improve the app and the overall experience, so once again, thanks for the time you've taken to share this with us.

If you have any questions or need a hand with anything else, we're just a post away.