So sorry if this has been asked a million different ways already - I'm quite new to Spotify premium and I don't think I have quite got to grips with how it works yet.

Yesterday I spent something like 4 hours importing as many tracks I could find on the laptop from my ancient iTunes account, and from playlists in Google Play. It took a while, I had to drag them into one giant playlist and I deleted a shedload of duplicates and unavailable tracks, but I have successfully resurrected and reproduced my entire collection on Spotify with a mixture of titles imported via Windows Media Player to the desktop client, from Google Play playlists I had downloaded to my device, and freshly searched-for-on-Spotify titles. I then went through and made EVERYTHING available offline, so I'll never need data (in theory).

My issue is this. Let's say I have 5 albums by one artist in my collection. The first three albums were in my original files, a mixture from iTunes and Google Play so they got dumped in the big playlist, and the other two only had a handful of tracks from each album so I redownloaded the complete albums again from Spotify.

But if I go to "Artists" on Spotify and look under that artist in my Library, it only displays the tracks for the albums I got from Spotify - the same if I search by album. The other tracks are hidden in that giant playlist where I imported the older data,

If I have downloaded all the tracks to my device and made them available offline (I don't understand the difference between those two descriptors either, but Spotify seems to think they are not the same thing), why won't they all show in the artist or album group?

Is this something to do with tagging or metadata that I'm not going to understand? Is there a way to liberate them from the playlist so they lanquish in my library filed under artist/album?

I bet I'm being really thick. 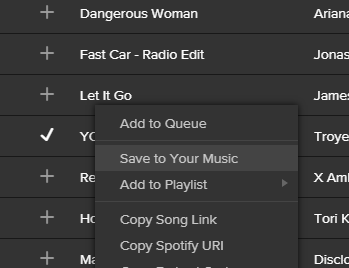 Subo72
Casual Listener
Oh. It really was that simple huh! Thank you so much - I was operating on the assumption that having a track in a playlist and making it available offline, equated to including it in the library.