In Our Headphones: November 2022

In Our Headphones: November 2022 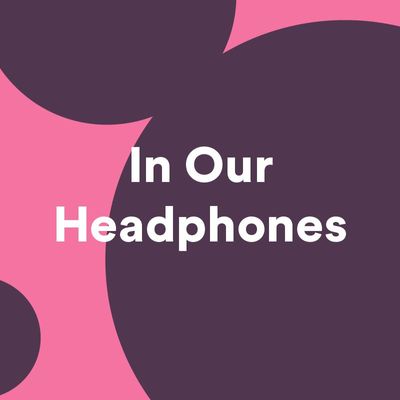 The lack of direct sunlight this past few weeks of November has gotten progressively apparent - gone are the days where you'd be blinded every now and then by a random glare that just so happened to sneak through the curtains, which you so carefully had closed in order to avoid this in the first place. Now you just have to adapt to the occasional feeble glimmers let through the thick grey mass that enshrouds the Earth - something my already vitamin D-deficient body isn't looking forward to in the slightest.

Not to mention the cold: don't worry - you aren't the only one who has found themselves shivering earlier than usual. The temperatures continue to drop lower and lower, counting towards the inevitable bombardment by the hit song All I want for Christmas is you.

Luckily for us, we can get by the gloomy days with the help of some headphones and our favorite music. Winter is indeed coming, as the Starks say, but it's not something we can't overcome. Here are the tracks that helped us keep warm during the beginning of coldest season of the year!

While on the topic of winter, we're kicking things off with our newest addition to the team @Joan and the mighty german thrash metal legends Sodom - a relentless assault of whirring guitars and thunderous drums that are just impossible to resist headbanging to. That, paired with a catchy "chorus", makes Nuclear Winter a perfect opener to the timeless classic that is Persecution Mania:

"Sadly, for most of this year, war has been a pressing issue and as much as you can try, the news of it is inescapable. This can naturally stress someone out, and I like to relieve that and get motivated by listening to some war-themed music. Instantly puts me in a better mood and gets me pumped to stay productive. And nobody does war music like Germany's icons from Sodom, another band I had the pleasure of seeing live this year!"

Joan stays true to his roots for his next picks as well, covering a rather wide and diverse array of the unfathomably vast amount of subgenres metal has to offer. Enter power metal veterans Kamelot with Ravenlight and The Spell:

"Now that concerts are finally happening as normal again (Wooohooo!) my listening for the month is often defined by what shows I attended. This month started with symphonic power metal legends Kamelot, a band I have grown up on. I listened to their latest album The Shadow Theory and to nobody's surprise, I loved it!"

"I also dived back into their discography as I hadn't done so in a while. I ended up rediscovering their old album Karma from 2001, which I had slept on for the most part, for absolutely no reason. It's an absolute banger that I just can't stop spinning now:"

Continuing the metal legends trend, we have U.D.O. whom Joan had the pleasure of seeing live recently:

"My other concert for the month was courtesy of the immortal metal God Udo Dirkschneider and his band. Again I dived into both their latest record and had some old-school fun with some retro offerings, all equally awesome!"

"I'd like to enhance the already dark and murky atmosphere created by the weather this time of year with some suitably melancholic music. This time I went with gothic metal titans Type O Negative, who's discography I have been digging deeper into."

Next up is @Kiril, whom you can always count on for some classic hip-hop and reggae. As you know, old-school is always cool, and the following tracks help cement that statement in a thick layer of bedrock that continue to withstand the fall of time.

"Throwback memories to good underground hip-hop brought to you by two cool cats named Talib Kweli and HiTek and their common project is called Reflection Eternal."

On the same train of melody comes this groovy gem from the past:

And we wrap up Kiril's picks with Lutan Fyah's and Countree Hype's Guide and Protect:

"Transitioning from hip-hop to reggae I binged on this new tune by acclaimed Rasta singer Lutan Fyah wishing you all more Guidance and Protection!"

@Lyubka joins the party and picks things up from here, but with a more modern approach. 50 Cent's Big Rich Town is about achieving success and moving up in life one way or another, doing whatever it takes to get to the top.

"This song was in my headphones pretty much all month. We're watching series of Ghosts and this is the soundtrack. I like this song and I just can't stop listening to it."

In anticipation for Christmas, Lyubka's next pick has been finding its way into her play queue more and more as the days go by:

"Yaaaaay! Christmas holidays are around the corner! I am the biggest Christmas lover and I enjoy listening to Christmas music a lot. This is one of the songs that I listen pretty much every day!

Next up is @MihailY, whose lovely daughter has been in charge of the play queue this month, dictating the music around the house. One of the things kids love the most is having fun, and Kolelo (which translates to bicycle) is just that - pure, unadulterated carefree fun, packed in a rather compact 3 minutes to brighten your day - something we definitely need these days.

"I've been trying to teach my daughter to jump higher and further and this song turned out to be perfect for the job. Whenever she hears the chorus, she goes into some sort of mosh pit frenzy and starts bouncing and shouting BICYCLEBICYCLEBICYCLE. I truly feel for the neighbors though..."

Of course, no little princess' playlist is complete without the magical Let It Go:

"Ah, Elsa and the frozen kingdom... The role model for millions of kids (and grown ups). I've been following her advice of "letting go" and trying to make peace with the fact that my Wrapped playlist will be 90% nursery rhymes."

@Elena's next on the DJ booth and things go in the polar opposite direction with Self-Destruction by I Prevail:

"One of my most listened songs this month, and in those 2 and a half minutes they have gathered by so many changes in tune and pace that I usually queue the song 3 times just to experience it to its fullest 😁"

Her second pick continues in a similar, but a bit more avant-garde manner:

"Another fave of mine is a band that I've already shared here previously, but I re-discovered Zeal & Ardor and the song Run in particular - it's such a unique sound that combines styles that you usually don't hear together."

@OscarDC keeps things metal with none other than Metallica and their newest single Lux Æterna:

"As a metal fan, I was waiting to have some news about one of my favorite bands of all time. And thankfully, that waiting came to an end with their newest single! I just can't stop playing it, it's so "Death Magnetic" that I love it!"

And speaking of new releases, here's the rather funky This is Why by Paramore:

"I was one of the guys that got that crush with Paramore back in the 10's, which is why this new release is playing out loud daily at home, great song! ❤️ "

Next up is @Vasil, who as a sworn fan of the Japanese anime BLEACH, has been listening to the soundtrack on repeat:

"After almost 10 years, the last arc of one of my all-time favorite stories got its animated adaptation and I've got to tell you, it is AWESOME! A few episodes are already out and it's going so strong, that it's putting the last two arcs to shame. And, don't get me wrong, they were quite amazing in their own right.

As a result of course & considering the instrumental/soundtrack lover that I am, I had a few of the show's signature melodies in my headphones this month. Hope you enjoy them as much as I do!"

We shift the mood completely once again with @Dian's picks, which help people from the Balkans keep warm in the cold winter days:

"When the road home is long
and the desire to meet the loved one strong,
but the radio and you don't get along
little Bulgarian pop-folk does no wrong."

"If you're avid non-listener to this style,
move a bit to the next genre isle
and play me some Serbian turbo folk
for the times we were students broke
and worked all day for a bottle of coke."

As for me, nostalgia hit me hard, so I decided to turn back to an old favorite of mine. Nails' second album Abandon All Life is without a doubt one of the most aggressive records I've heard. The sheer ferocity these guys play with is absolutely phenomenal, and Suum Cuique remains my go-to track when I'm in the mood for wreaking havoc.

While checking out other bands that sound in the same vein as Nails, The Secret came up, and oh boy, I'm glad they did. These Frenchmen are just as brutal and unforgiving as their American counterparts, and are something that definitely shouldn't be kept a secret:

The last few days in my town have all been somber and gloomy, perfect for listening to Altarage. Their unique sound with guitars, drenched in murk, earth-shattering drums and inhuman howls make them easily distinguishable from the rest of the death metal bands (not to mention they're from Spain of all places).

Knowledge shows a perfect display of what Altarage are capable of: the track features an unrelenting barrage of blast beats, but also keeps things varied by slowing down the tempo occasionally, and of course, the trademark sections where only the thick suffocating guitars are left to roar, evoking the feeling of inevitable doom.

And speaking of inevitable doom, the hulking behemoth that is Devorador De Mundos lives up to its name, and is another standout not only in Altarage's discography, but in death metal in general. Embrace your final moments as the world crumbles and succumbs to the void. This is the sound of an apocalypse.

There you have it folks: our IOH compilation for November. You can check out the full playlist below!