I have multiple playlists. My biggest one had been the starred playlist with over 1000 songs on it. I believe it was 3 days ago, and although I had been listening to the playlist the day before, when I logged on I noticed the starred playlist was gone. I was using the mobile app in my car and noticed that for some reason after a song had played it started playing this german audio book or something? When I get home I search for the reason why. I do see a post with a solution posted by someone from Spotify telling me that Starred music is now located under Your Music and then Songs. So I click there and here's what I see now: 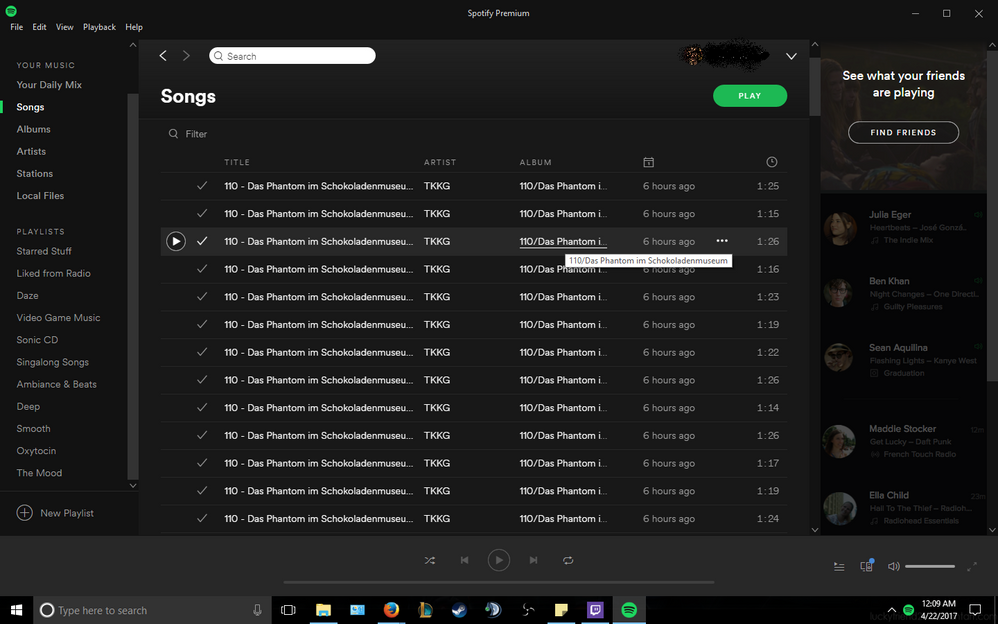 It's completely filled with this album of some german audio book or soemthing? After looking through some forums I find that I can see my old playlist through the spotify webclient. I spend a decent amount of time manually adding over 1000 songs to a different playlist that is not the default Starred playlist. Can someone explain to me what happened? Also, you will notice at the bottom right there, the Spotify Connect icon has a blue notification over it. So far I have used my desktop and my phone for spotify. The devices show up as "This Computer" or "My Name - PC", and ZTE A2017U_6460 for my mobile device. A third device is now showing up, called ALE_L21. I have no idea why that is, I have not opened spotify through anything else except the web client, but even when that is closed it shows up. Spotify has started being buggy when I play it through bluetooth in my car on my mobile device, it will stop randomly.

On top of all that, through the process of manually making a new playlist, I noticed certain songs have disappeared. I'm already aware of content disappearing do to technical and legal reasons. But some of songs that were local files are missing now as well. I go to search in my local files to bring it back, but it will not show up in local files. There are songs that are the same file type and in the same folder and only some of them will show up and the others won't.

I'll be honest, I already felt my patience was tested when Spotify came out with the update that had no working filter/search function for playlists. I am currently paying for premium but starting to wonder why. Can someone please be upfront and explain to me why my largest playlist was completely erased and replaced with a very weird german album? Please be honest, I already have seen I'm not the only person with an issue very similar to this.

Have you tried signing off everywhere? There's a button for that on your Spotify account. That would kick out this odd device as well.

Changing the password would keep that from happening if that issue was caused by unauthorized access. So do that too. 🙂

SebastyRock Star 17
Help others find this answer and click "Accept as Solution".
If you appreciate my answer, maybe give me a Like.
Note: I'm not a Spotify employee.
Reply
0 Likes
Highlighted

That did not solve the issue of the devices showing up and you didn't really address any of the main issue I stated. Are you implying that despite this happening at the same time you removed Starred Playlist and replaced it with Your Music / Songs, you think it's more likely that someone hacked my spotify account to change my playlist at that time?

Mm, I don't remove playlists or anything.

If choosing the second and you get an email telling you to visit this page, write them back. Don't mind the no-reply email. Spotify staff will get to you shortly.

SebastyRock Star 17
Help others find this answer and click "Accept as Solution".
If you appreciate my answer, maybe give me a Like.
Note: I'm not a Spotify employee.
Reply
0 Likes
Highlighted

exactly the same thing happend to me , except all my songs got replaced with french music. thought i was the only one

It's happened to me twice driving to work, and the only thing i cant really think of is that it's somehow picking up other peoples devices when you drive past their house and messing with everything.
I got some wierd spanish podcast.