Spotify, please stop this kind of scam. This behavior brings quality down for everyone.

Spotify, please stop this kind of scam. This behavior brings quality down for everyone.

Some "producers" are posting music on Spotify with false credits. They use the composer name in the "performed by" field for some pieces of classical music, and escaping being blocked. Usually the pieces are some bad computer-generated garbage, or maybe just a bad performance or maybe copywright infringement.

Check the examples below, the pieces were obviously not performed by Beethoven or Bach, but the "producer" listed them as the "performers" so if I want to block the artist I would end up blocking Beethoven or Bach, and I don't want that. I want to get rid of the lousy "producers" Chill Stream and Exquisite Classic, the producers in the cases below and probably the real "artists".

Please Spotify moderate this or allow us to report this kind of scam in the app in an easy way. 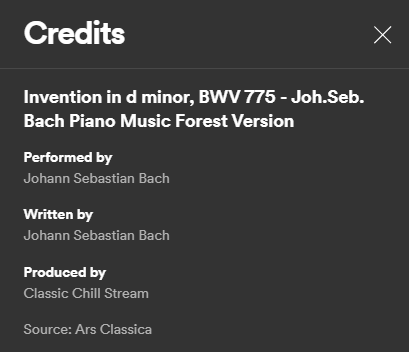 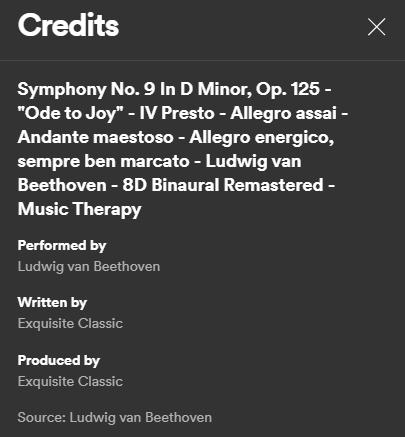 Hello - I thought I’d be the only one seeing this phenomenon, and you posted just an hour ago!

Same thing: Mediocre electronic music, released with “realistic” album titles, but under the names of some good comedians. The first one I found was by “Demetri Martin”, but has since disappeared, yet today there is a “single” attributed to him and “Raz”, called “Who Are U”.  (lol)

Last night I discovered one under “Brooks Whelan” called “Infinite Health”, with a drawing of a chameleon as its graphic, and an “Eddie Pepitone” one called “Blazing”, with some sloppy abstract paint art. Same kind of ‘music’ - ProTools + rainy afternoon = groundbreaking electronica.

How do you pull up who really posted the junk? And what’s the motivation of the fake posts? A check for $.02 US? 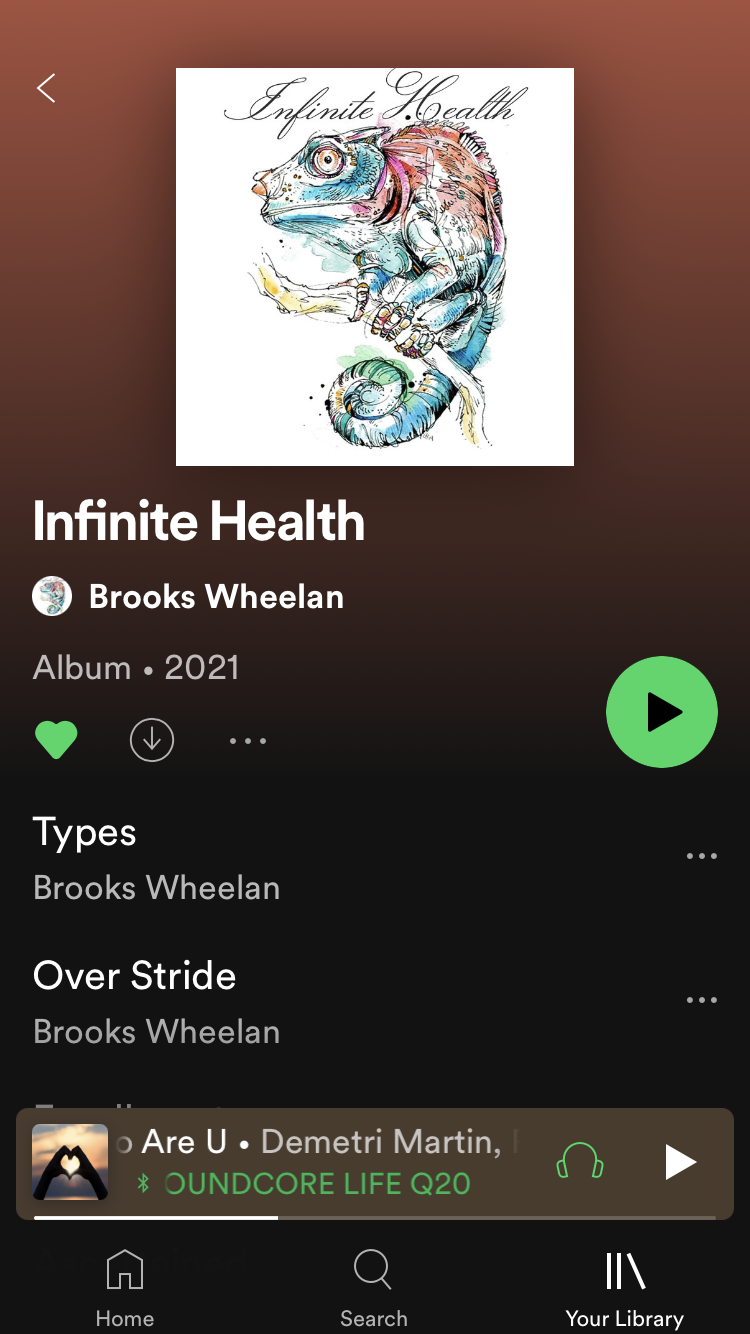 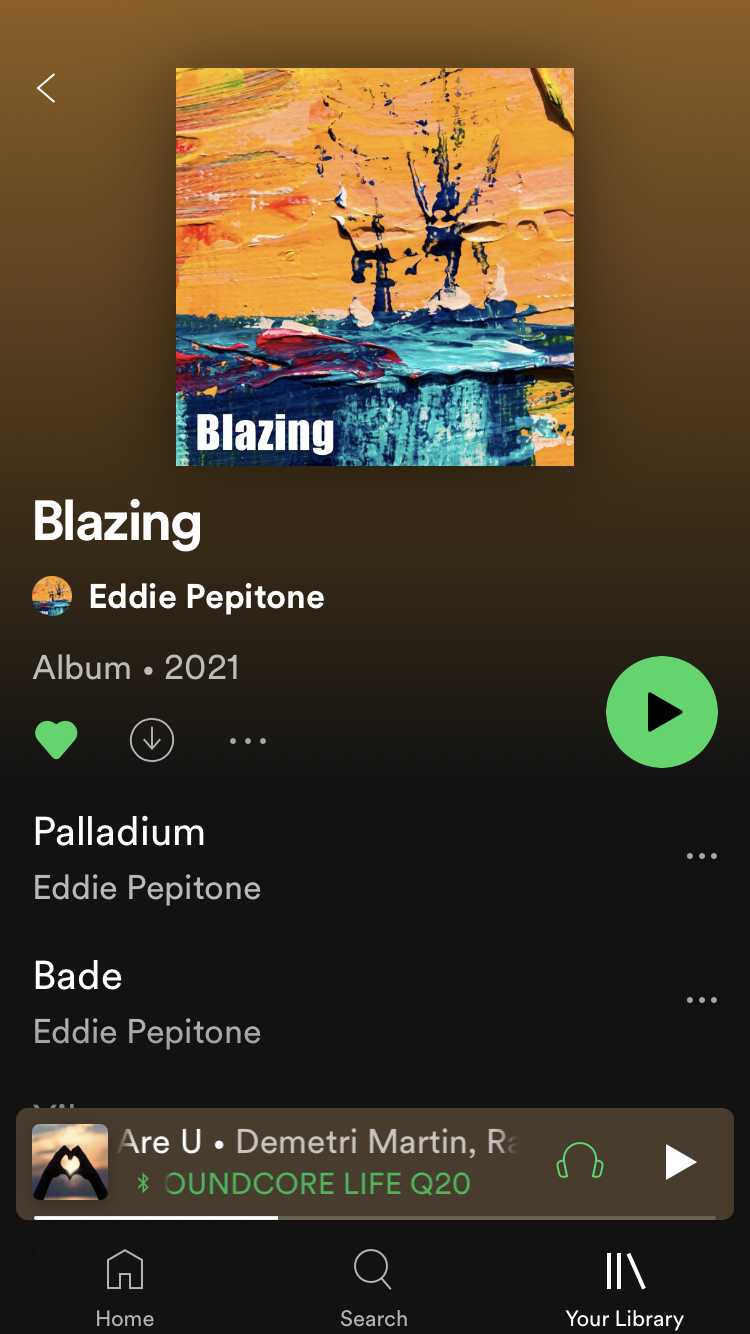 We'd recommend reporting this to our customer support team (if you haven't already), so they can forward the information to the internal teams at Spotify, who'll then take a closer into this.

The Community is always here if there's anything else you need assistance with.

Hi Yordan, I did contact the support team more than once. they pointed me to a report page that doesn't seem to be a good way to explain this issue since it is nuanced. It is not a simple typo or a name mismatch, it is more complicated than that and the little guy doing support doesn't seem to understand or care, they are worried about finishing the ticket and moving to the next.

So, this means that this channel here is the second I try and by your response I understand it still won't reach spotify's team? Is that right?

Do you see the level of isolation between spotify and its users when it comes to more nuanced discussions? We are firewalled out of any meaninful feedback that requires anything outside of support algos. Sad.

I really miss a "report" post on spotify app. The issue i reported is just one aspect of not handling credits correctly, there are other potential issues that span from plagiarism to enabling slavery, this is just the start of the discussion.

I spent time to reach support and to write all that because i like Spotify, but if it is just being thrown out in the void i will stop doing this and move away from the platform.

Thank you for keeping us in the loop.

In this case, we can help you get this report to the right teams. In order to do that, please share with us the URL of all the "producers" you'd like to report.

My reply to your post was apparently erased because I referred you to an interesting Metafilter link about Spotify scams which contained a four-letter word.

Search metafilter.com for “Spotify” or “Ian Urbina” and it should come up. It’s called “A complex web of ****ery.”

Below, the further request for specific links in THEIR OWN WEB ENTITY underlines our doubt that the lead will be pursued: we placed the lead right in their hands already.

I only use the mobile app, so maybe Zombies will be so kind as to find the artist info on the fakes I already illustrated under Brooks Wheelan and Eddie Pepitone. The “right-click” feature on my old laptop can’t seem to support the “more artist info” feature. Or maybe you mods could take a sec and give it a go? Thanks, sorry about the inexcusable filth in my previous post! 🙄

hello there, I see no way to link to producers, only to the music they post. i already provided 2 links, here are some more:

https://open.spotify.com/track/5bhfSDrFSIXl5ZJK2Txyt3?si=445b78ee625e47a4
https://open.spotify.com/track/4IsmT1BcEy2AiI1lqHCO3L?si=268f17ed86cb4470
That out of the way, reporting fake artists is the least I want to achieve here, what I am looking forward to is:
- Make sure this kind of music is not recommended to me anymore (not just the music from the producers I reported)
- Ask for a feature in the Spotify apps to report this kind of behavior in an easy way (look at what I am having to do just to get some spotify brains to take a look at the issue
- Open some eyes to the huge implications of not moderating or not letting the community moderate credits properly, as I said, this conversation is deep
I hope my message is clear.
Cheers
Reply
1 Like

Thanks for sharing this info with us. We've gone ahead and reported this to the right folks.

We also appreciate you taking the time to share your feedback and thoughts with us, as it helps us improve the app and the overall experience.

If you need a hand with anything else, the Community is here for you.

hello, again this kind of trash content is showing again in my "discover". 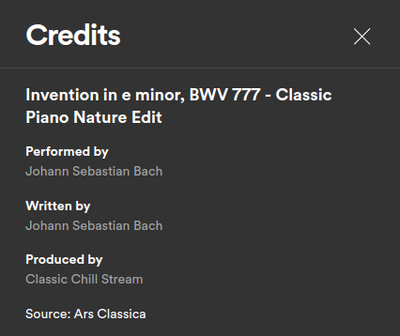 and here I am unable to block this from being recommended. I like Bach, Bach is not performing.

Youtube music is getting better at a faster pace.

The best thing to do here is to report this to the content team, following the steps in this Article. They should be able to take care of it 🙂 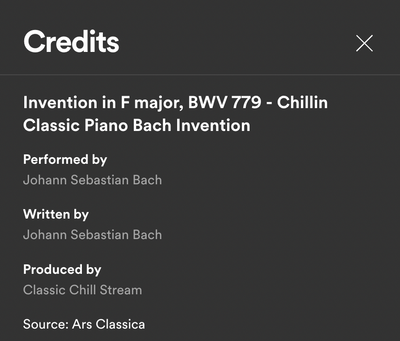 So, i want to block this but I must say i don't like a song from bach or I don't like bach himself.

They create bots to play parts and upload their scam to spotify as "performed by bach".

I will not be getting into a new chat with support everytime I see one of those.

1 - You need to curate this better. Everyone knows that this bach is dead and there are no recordings of himself playng anything.

2 - Allow me to block the song's producer, in this case the scammer is classic chill stream.

And another one, this guy didn't even bother to name a producer 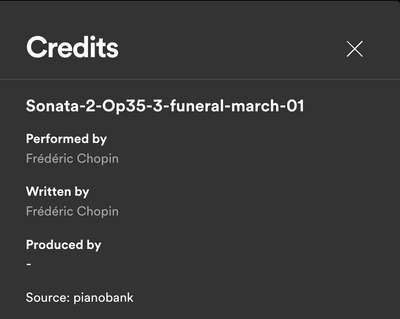 Don't producers have to be verified? And how do this scams get their way into being recommended to people?

Bad. Competition has caught up, apple music and youtube music are good alternatives now. You gonna lose me. 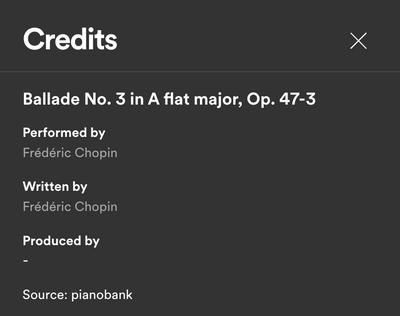 So Chopin is recording his songs now?