When using Spotify on Windows 10 April 2018 update build 17134.1 or even Redstone 5 builds every second time you click the maximize middle button on spotify it is not completely going into a maximized window! And you can actually see that the very top of spotify is not fully maximized and the bottom of Spotify is cut off below the bottom taskbar as well.

I notice this seems to only happen with software that use non standard UI like Spotify and other programs I use like eM Client, iTunes and Bandicut.

Something changed in April 2018 update and remains in Redstone 5 builds. You can see for yourself by running Windows 10 April update or Redstone 5 builds. And install either Spotify, iTunes, eM Client or Bandicut. And to see the bug keep clicking on the maximized button on any of these programs and you will see that every other time you make them maximized it is not fully maximized and looks strange.

P.S. This does not happen at all with any Windows 10 builds before April 2018 update!!!

Who needs to fix this issue you guys or Microsoft? 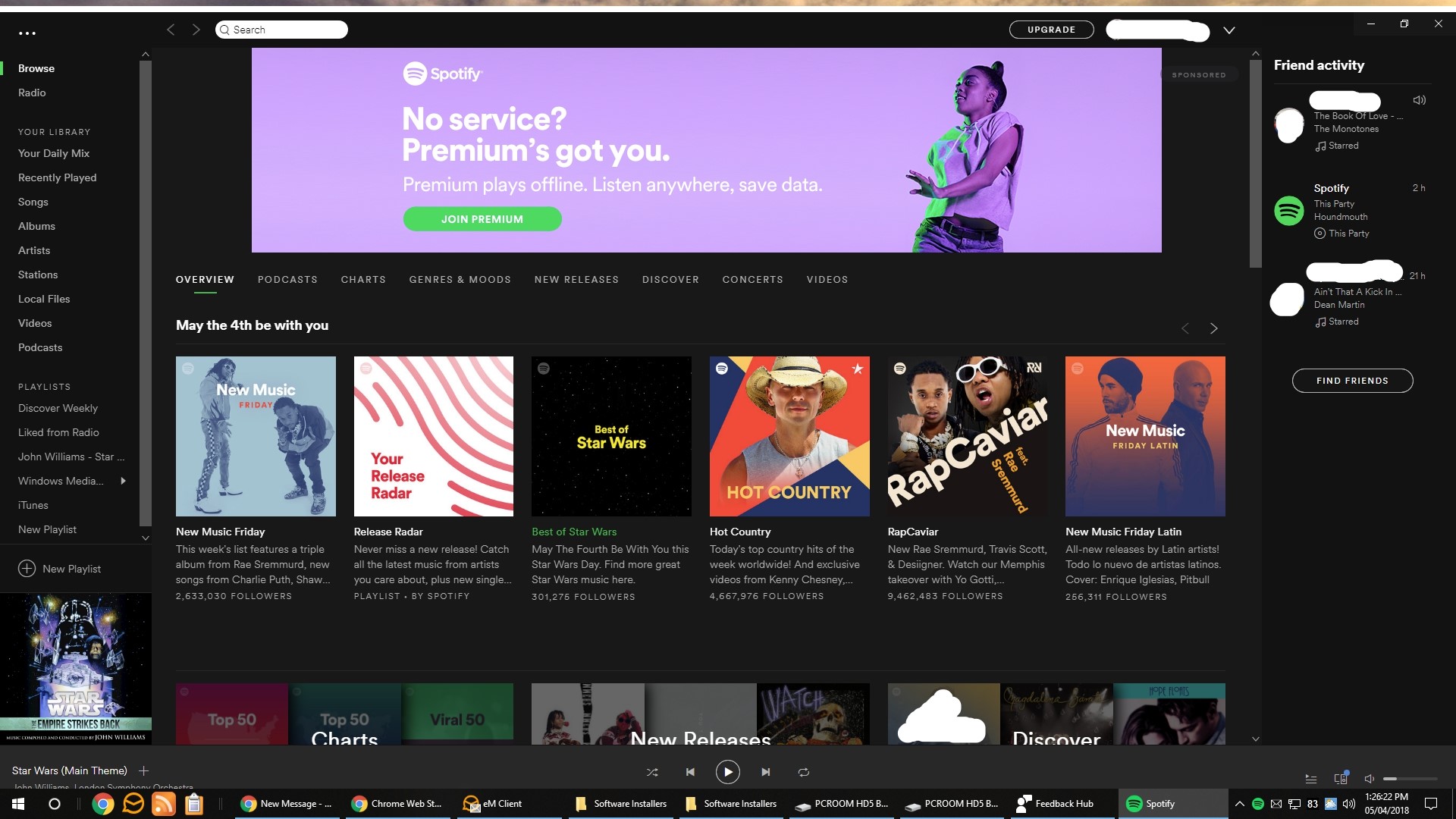 Compatibility mode isn't a long term solution. This problem has been fixed for me since the 17134.191 build, but it seems people are still having problems. The October Update 1809 was out for a little bit until Microsoft found out about people's personal files being deleted after upgrading, so they have pulled it for now. blacklord049 said the bug has been fixed for him on 1809 (he got the update when it was still out), so I think this issue should be completely fixed for everyone once the new update gets rolled out again.

Just wanted to post and say that I'm also having this issue. For me it's happening across Spotify and Discord which initially made me think it was a bug with electron apps; however, if you're experiencing it on applications like iTunes then I suspect it’s an issue with the latest Windows update. I updated to version 1803 and that’s when this behavior started, but I wasn’t experiencing this issue on the previous windows build which leads me to believe it’s a Microsoft issue. I’m curious to hear if people who did a completely fresh install of version 1803 are also experiencing this issue.

Same going on me, but in another way, while top is okay, on the bottom there is a white line. 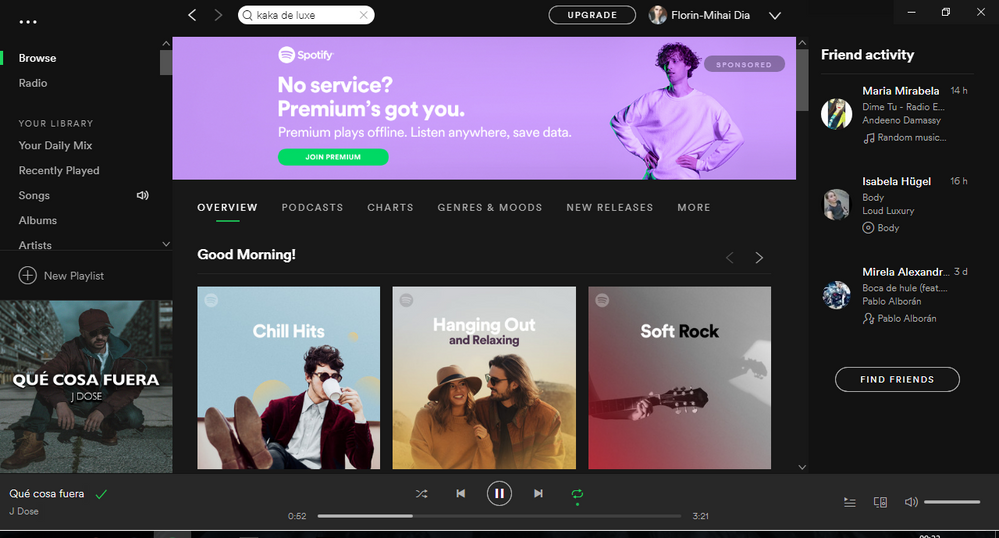 Thank you for this! I have the same problem after the new Windows 10 Update and it is very annoying because I prefer using full screen apps.

Yet another update came and still not fixed...

I am very happy to report that this bug is now fixed in the just released Redstone 5 insider preview Windows 10 Build 17666! 🙂

So it was a Microsoft issue and not Spotify.

When we wait for September or October or whenever RS5 comes out, I suggest Spotify to workaround this problem somehow.

No news? This bug is very irritating.

I believe Microsoft is the one who should be fixing this because it happens with Discord too, so it might be an operating system issue, not just Spotify itself. But I wish Spotify would release at least a workaround for those with the April 2018 update, because UWP or Win32 apps without a custom top bar seem to be working fine. 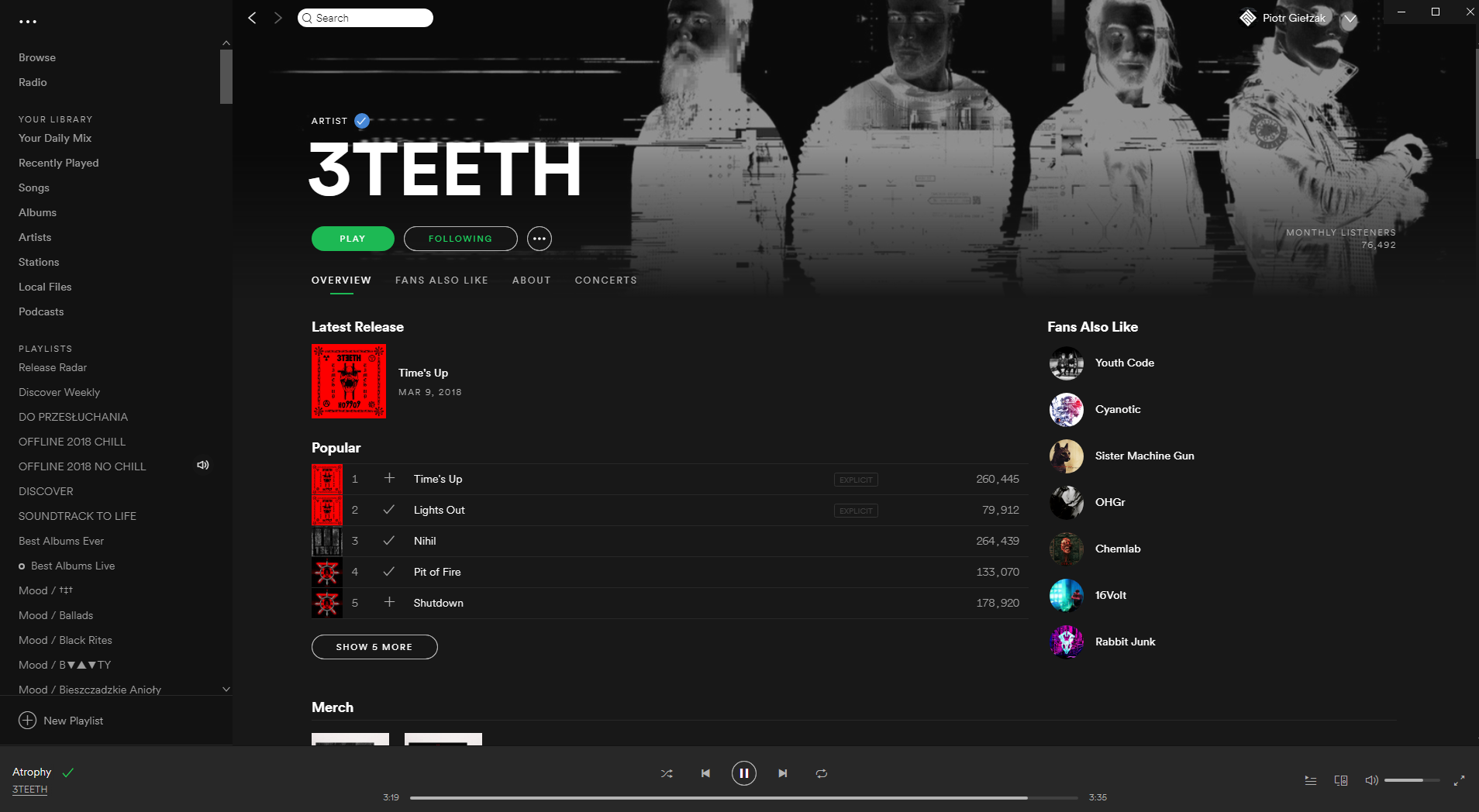 Spotify updated and still no fix.

it's from windows, not spotify
https://www.reddit.com/r/Windows10/comments/8h3eqo/windows_1803_white_bar_across_top_of_maximized/

I am also having a similar issue.  I run a 1080 monitor at home, but my work laptop is 720 and I have the same issue on both screens (so it does not seem to be a resolution issue for me).

The fix for me has been simple but annoying: if you start spotify maximized, then restore window size, then max, then restore, then max for a third time the window fits properly for me.

Basically I have spotify open maximized, but the window is not actually maximized (there is a strip along the bottom and sometimes along the top which is not maximized).  If I restore the window size the window itself gets all messed up (the min/max/close buttons are detached from the window and off to the side etc).  If I then re-maximize the window it remains **bleep** up, just bigger.  BUT if i restore it from there it is fine, and if I max it again all the issues are corrected.

It's a strange bug, and several forums for windows and spotify have noted that the issue seems to be related to 4k montiors, but as I mentioned I have a 1080 and an 720 and I have this issue.

The bug does not affect my ability to use the program, its just obnoxious to have to restore/max/restore/max every time I open the program.

For me its basically you maximize white line on top you minimize you maximize its fine and then repeat. Annoying to have to move spotify twice for it to maximize properly

I am having this issue on Spotify, Chrome and Discord, all having a white line on the top only. Happens every other maximize. I just got an SSD and have a fresh install of Windows 10 build 1803. Microsoft was supposed to fix this bug on custom title bars in the beta phase of Redstone 4. Only Microsoft can fix this. Sadly we'll probably have to wait until Redstone 5 in October.

Fastest solution(s) I could find:

Mouse:        Simply click and hold the top row of the spotify app and pull all the way to the top of the screen.