Edit: Hey guys, thanks for your kudos! This idea has been implemented in the new version of Spotify. BUT, they haven't yet added artwork for playlist *folders*. I've created a new idea for that, so your kudos would be appreciated over there as well! https://community.spotify.com/t5/Spotify-Ideas/Playlist-Folder-Artwork/idi-p/729671 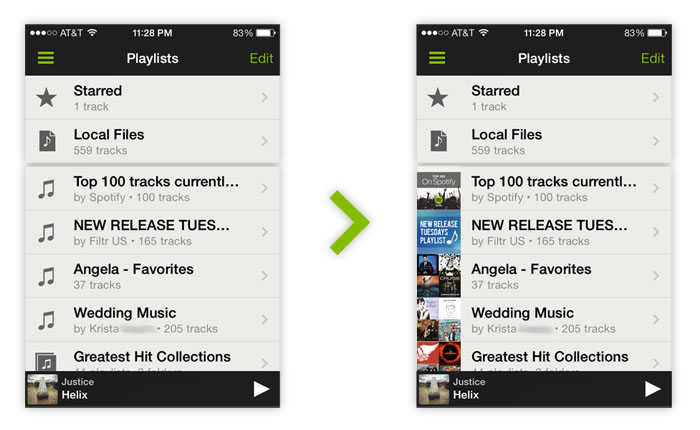 Seems simple enough, and it's already like this on all the other devices, just not the mobile apps. I hope this means it's on its way?

In April we introduced Spotify’s new look. Now Spotify has a darker theme, refreshed typography and rounded iconography. This new design includes showing playlist artwork on your mobile as well.

Thanks for the kudos and for your idea suggestion @mdewater

Thats fine but please give us the option to turn it off.... I would prefer the list to load faster and use less bandwidth.

Goodman
Spotify Legend
Status changed to: Good idea, vote for it
Nice idea. Let's see how many more kudos this gets.
1 Like

Simple Idea, wonder why its not already implemented. YES PLZZ!

Patty_dawg
Newbie
Seems too simple not to have!!! Spotify listen to us..
0 Likes

This is a great idea that is simple enough, so hopeful it will happen.

This is coming in an upcoming iPhone update! 😃

UPDATE: This feature is added in the new iOS version 1.0. rolling out today!