Honestly I am hoping for great things from Spotify in regard to lossless streaming.  They are my preferred source based on music and application.  My only issue is the lack of communication and timing.  Is it really coming in 2021?

I wish someone from Spotify would chirp up and tell us what is going on with the audio upgrade..is it happening or not?! 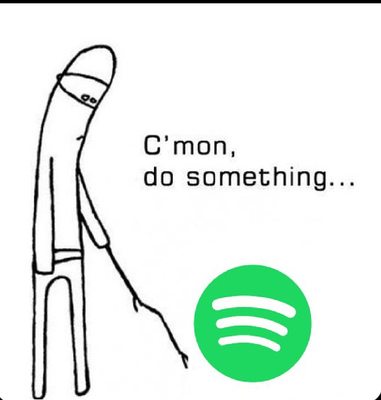 Please vote for the below to fix the poor UI library layout with only 'followed Artists' visible.

So here we are... 7 years have passed after this request was posted, every competitor now has HD audio and Amazon and Apple don't even charge any additional cost. From a niche feature it has become the standard, but... not for Spotify.

Tired of wating, I switched to Amazon Music after 8 years. Yes, the app is worse, it has more bugs, even with Echo devices, surprisingly, Spotify works better than Amazon Music.

But at least I have HD audio, which should actually be called "Normal Audio", because we had that quality on CDs back in 1986.

Every month, as I'm getting used to the new app, it becomes less and less likely that I'll be switching back to Spotify, even if they released it for "free" (I mean, included in the Premium plan), imagine if I also had to pay more for an HD plan to go back to Spotify.

Has Spotify lost the HD train? Did they just think that it's such a niche that they could just let those users go? It's possible. HD streaming increases bandwidth costs, probably by a lot. Maybe they had data that shows that it's interesting only for a few users. They seem to have bet a lot on podcasts, instead, which I don't care about. Being a music service, I care for audio quality, so I switched.

Maybe our paths will cross again... for now, so long and thanks, Spotify, for all the fish! 🙂

lappymusicman
Casual Listener
Well, it was supposed to happen “later this year” but there isn’t much “later” left so who knows what’s happening.

I have been using Qobuz for streaming to my Hi-fi rig for over 2 years now. Before that, was using Flac from computer.

Qobuz is available on Sonos too now. We have lots of Sonos'.

If there's no Spotify CD this year. I'll cancel our family sub and move everyone to Qobuz family!

So that'll be my drop in the ocean annual sub lost to them.

I've subbed since the very beginning too!

Tomorrow is November 1, leaving 2 months to "later this year". No word. No news. No update. No beta rollout news. No "we have a problem" update...nothing.

I think Spotify is having second thoughts about lossless streaming since Apple is not charging extra for it with their music service. Lossless streaming will certainly cost them more and maybe the bean counters have decided its not worth it.

This thread is still marked "Under Consideration" so nothing is definite even though they announced they were going to do it last February.

Maybe they have changed their mind due to the cost .