I've seen this idea being thrown around before but often closed/inactive, so I thought I'd give it another go. (see here) 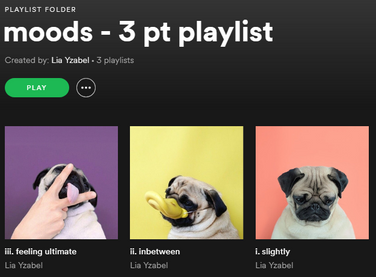 The folders feature has been around for quite some time now, and I love the idea of being able to organise my playlists as I do have more than 80 saved (lol).

However, having the folders public to followers would:

This often gets turned down due to lack of likes/votes, so make sure you show so we can finally grab Spotify team's attention and make folders go public! 🙂

Hi! Thanks for the feedback!

As already said, repost of this idea
/L

I seriously don't understand why we can't create folders through mobile applications (iOS and Android) and the ones we create through the desktop app are only private. This functionality would improve my use so much, as we can shuffle play the entire folder on a roadtrip, for example.

any updates on this? is there any chance? I want this so bad

Absolutely. I used to think people could see my folders, and i directed a friend to my profile and it was a mess. This would make it a lot easier

I personally have about 50 playlists that I share with friends, and they're all neatly organized in themed folders. I wished my friends saw that on my profile, instead of the new ones that aren't complete or just random ones.

Edit: And yes, can we add shuffle folder and create folder on mobile? Why are the two platforms so different...

I think this would simplify the look of everyone's profiles and just make it easier for friends/followers to find what they are looking for, especially when someone has several rows of playlists!

As someone with 178 active playlists, one can imagine how tedious it might be to sort through my profile. I have many of these in folders which make it much easier to find what one is looking for.

I think this is a great idea. Three years into spotify and my playlists were a mess, using folders is great but its a bummer that everyone else still has to sort through all of my playlists in some big pile.

For real!! We need that!

Yes! PLEEEEEEEEASE enable this idea. I have dozens of playlists and would really like this.