Disliked and blocked artists keep showin up in Release Radar

Disliked and blocked artists keep showin up in Release Radar

Understandably Release Radar  doesn't always have the best songs and artists for me. But The issues is that I keep getting the same artists I disliked and even blocked (which is only possible on mobile?!). Some of them I kept disliking/blocking for months now, even years. I was pushed to writing this post because recently it got worse and more often than not more than 50% of my Release Radar consists of these artists.

When you dislike an artist the message you get says they won't show up in release radar anymore, which means the behaviour described here is a bug.

I will note that sometimes they are skipped even though they show up, but mostly they aren't being skipped. I would expect me liking and disliking songs and artists improve the song picks I get and not get worse and worse over time.

Welcome to the Community and thank you for reaching out.

Currently, the way the Hide this song feature works is that it blocks a certain track from the specific playlist on the current device. The way that Release Radar is set up is that it gets renewed every Friday and counts as a new playlist. Because of this, the songs that you had hidden in the last week might still appear in the new one.

However, those hidden songs shouldn't get played. If they do get played as you mention, there's a possibility that those are different versions of the songs you had disliked before. In order to test this, could you share with us the URL of some of the songs that are repeating and playing across multiple Release Radars? This way we can take a look at them.

Lastly, we suggest you check and leave your +Vote on this idea that suggests the synchronization of "Hide this song" across all devices and playlists.

@MaFeG
Are you saying that hitting "I don't like this song" or "I don't like [artist]" does nothing but hide that song for the current week, and that it has no impact on future weeks?

psycowpat
Regular
@MafeG thanks for your response
I'm actually mostly talking about artists, I keep disliking and/or blocking some of them and they just keep coming back. In some cases I listened to a (single) song by some artist a few years back and now they just live in my Release Radar any time they release a new song.

"Got it, from now on we won't put <artist_name> in Release Radar" seems pretty clear that we're not talking about this current week but of all future Release Radars.
A couple of artists for example:
(and I want to note that I don't think there's anything wrong with them, I'm just not into their music and would rather not listen to every new release they have)
https://open.spotify.com/artist/08yf5A2nS4XEeNvabDXqyg?si=23o2puxyTNSUrnc7UtoJ2w
https://open.spotify.com/artist/3z97WMRi731dCvKklIf2X6?si=XdEN736XTdmjucULWY8bqA
Reply
0 Likes

Unfortunately, at the moment hiding an artist won't keep it from appearing in your recommendations or new iterations of the Release Radar. But as I mentioned above, their music shouldn't be played.

@psycowpat Just to make sure, do those blocked artists actually get played when they show up on your Release Radar? Or are they skipped when you're going through the playlist?

knockoutn336
Regular
So disliking artists currently does not prevent them from showing up in future weeks in Release Radar. Is that a known bug, or is that an intentional design choice by Spotify?

Blocked/disliked artists' music does get played when they show up again in Release Radar (after having already been blocked in previous weeks).
Reply
0 Likes

Spotify is always working on improving the app and making it more user friendly and customizable. However, the recommendations you get in playlists like Discover Weekly and Release Radar are automatically generated based on your listening activity and what is most popular with other users who listen to similar music.

So it might take some time for the recommendations algorithm to adjust to the blocking of certain artists. Sometimes, depending on the type of content you listen to the recommendations pool is not that vast, so you might see the same artists you have in the past or ones that you've already blocked.

Don't hesitate to reach out again if you have more questions.

As psycowpat said earlier in this thread, what both of you are saying is contrary to what Spotify says when an artist gets marked as disliked.

"Got it. From now on we won't put [artist] in Release Radar."

This isn't a "we're striving to make things better" kind of thing. Either the toast message is wrong, or this is a bug. I'm hoping it's a bug, because it's maddening seeing the same artists that I've already said I don't want to listen to pop up every week. 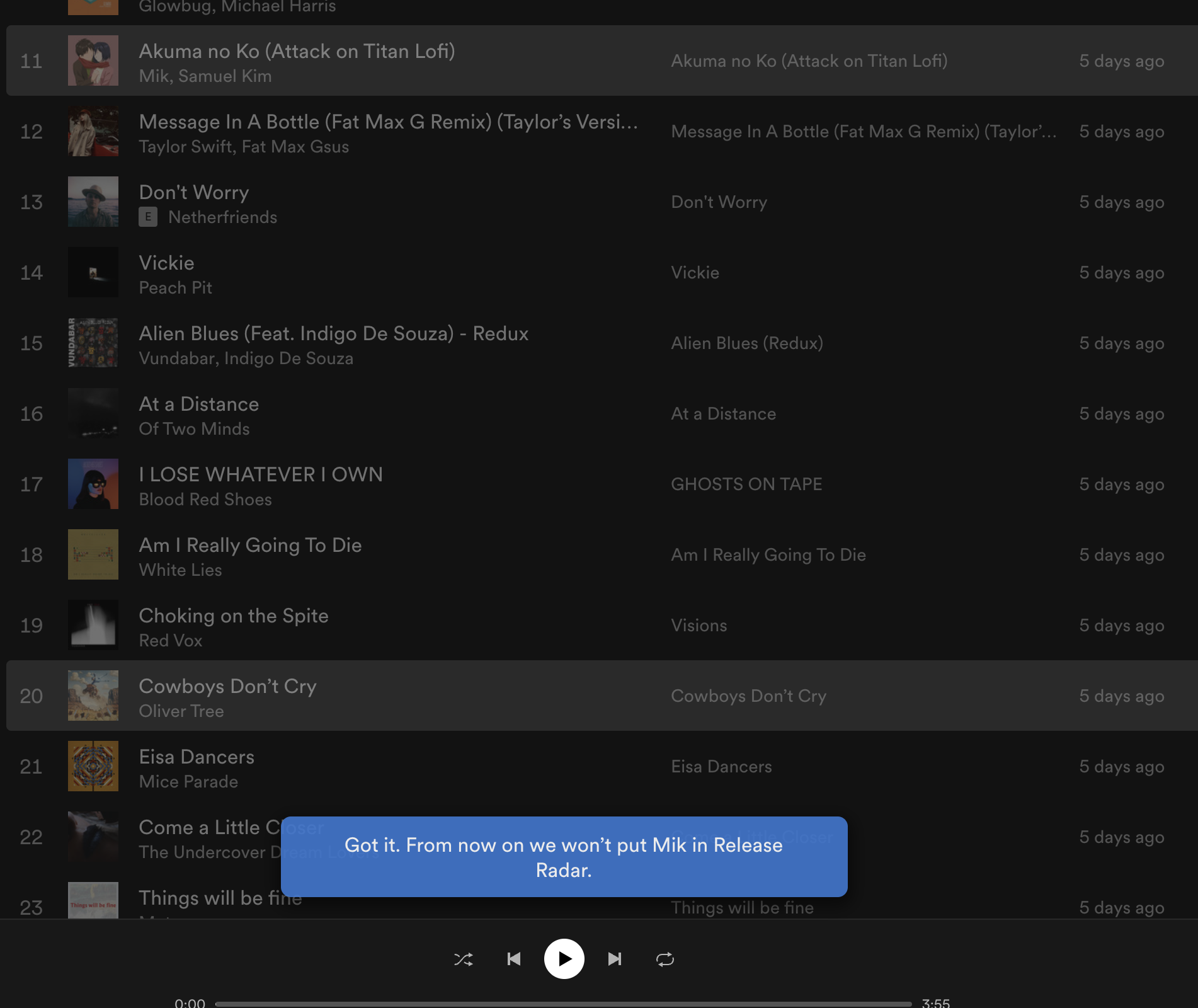 As knockoutn336 said, artist keep reappearing and while at first they usually are skipped, at some point they start being played again. The 2 artists I mentioned above are artists I've been blocking for years and they just keep reappearing and keep getting "technically unblocked". (and these are just 2 examples out of a long list)

I would consider it a bug either way. There are 2 options

This is really frustrating because when the Release Radar I get is good, its really good! and its a great way to find out about new releases and discover new music by similar artists

But when >50% of it is filled with music by artists I previously blocked, its a just a terrible listening experience. Unfortunately. lately this is the case more often than not.

Could not agree more with what previous speakers write. I get continued suggestions for podcasts that are so offensive and provocative that I am actually considering closing my account.

Also I do not put too much faith in the reliability of this "radar" which is said to be automatically generated based on my listening activity. For example in my Spotify Wrapped for 2021, I had a song in the top 5 that I listened to twice during the year.

Thank you for your replies and feedback.

We understand that things can feel frustrating when things don't work as you'd like them to. Rest assured that we're always trying to improve as we always strive to improve our features.

We hope for your understanding and that you continue using Spotify and find it gets better in the future.

Once again - thanks for the feedback, we appreciate it. Let us know if we can help you with anything else.

Sure seems like the service I'm paying for is trying to gaslight me into believing I somehow misunderstood this message:

"Got it. From now on we won't put [artist] in Release Radar."

How else could you understand it beside the obvious, "you're not going to see this artist in this feature from now on"?

I understand an acknowledgement won't change the way this (obvious) bug is handled, but I just can't leave it at a point where you claim its all of us who are wrong when we read this simple message and that our expectations of the feature are unreasonable.

We understand that things can feel frustrating when things don't work as you'd like them to. Rest assured that we're always trying to improve as we always strive to improve our features.

That is not ambiguous. That does not say "we won't play [artist] in Release Radar this one week but will show that artist again in the future." I don't understand why you'd weave away with nonsense language like "we're striving to improve" and not acknowledge that the message Spotify displays does not match what actually happens when using the program.

This is more than frustrating - marking an artist "Do Not Play" does not work.  They still show up in suggestions and Release Radar and their tracks still play.

I've been struggling for over a year with what I can only assume is a scam artist who operates multiple profiles under different names.  I have marked every single one as "Do Not Play" yet this artist's hot garbage shows up every week in Release Radar.  Oh, and the artist often "mistakenly" tags his tracks with other more popular artists I do follow as artists on the track so even though I don't follow any of his profiles and never have his stuff still shows up due to the other long-standing bug where "same name" artists show up in up in Release Radar.

I report it every week to the bot.

It looks like artists can be blocked on the mobile apps. I'll have to wait to see if this actually does prevent those artists from showing up in my Release Radar next week.

My guess is the moderators like @Jeremy , @Alex , and @MafeG have a vague idea of how the mobile apps work, but are completely clueless as to how the desktop programs work. MafeG even said "Hide this song" which is what it says on mobile.

In case any of you moderators read this, the mobile apps and desktop programs are different. Everyone in this thread is upset because the desktop program is buggy and says incorrect information to us.

An artist I blocked on the mobile app still showed up, but as a supporting artist on another artist's song. I had not blocked that second artist, so maybe blocked artists can still slip through when they're not the first listed artist on a track.

I'll report back next week and let you all know if the blocking seems to work this time.

I understand buggy software, all software is buggy.

what's frustrating is the lack of acknoledgement that there is an issue and attempts to gaslight + the fact that it seems that nothing will come out of it.

Not even a bug report that will probably never be handled.

Blocking artists in the Android App did not prevent them from showing up in Release Radar.

It's completely broken, and the moderators are unwilling to acknowledge it lol. I guess the best thing to do is to find another streaming service and a way to transfer playlists.