As the title says, when I’m on cellular network (LTE), most of the album cover art is missing.  On WiFi, everything is fine.  This problem came about roughly 2-3 weeks ago.  I have logged out/in, uninstalled/installed....nothing.  Any thoughts?

Have you tried on another 3G network other than your own?

In any case, could you send us several screenshots to show us what you mean by the album artwork missing? 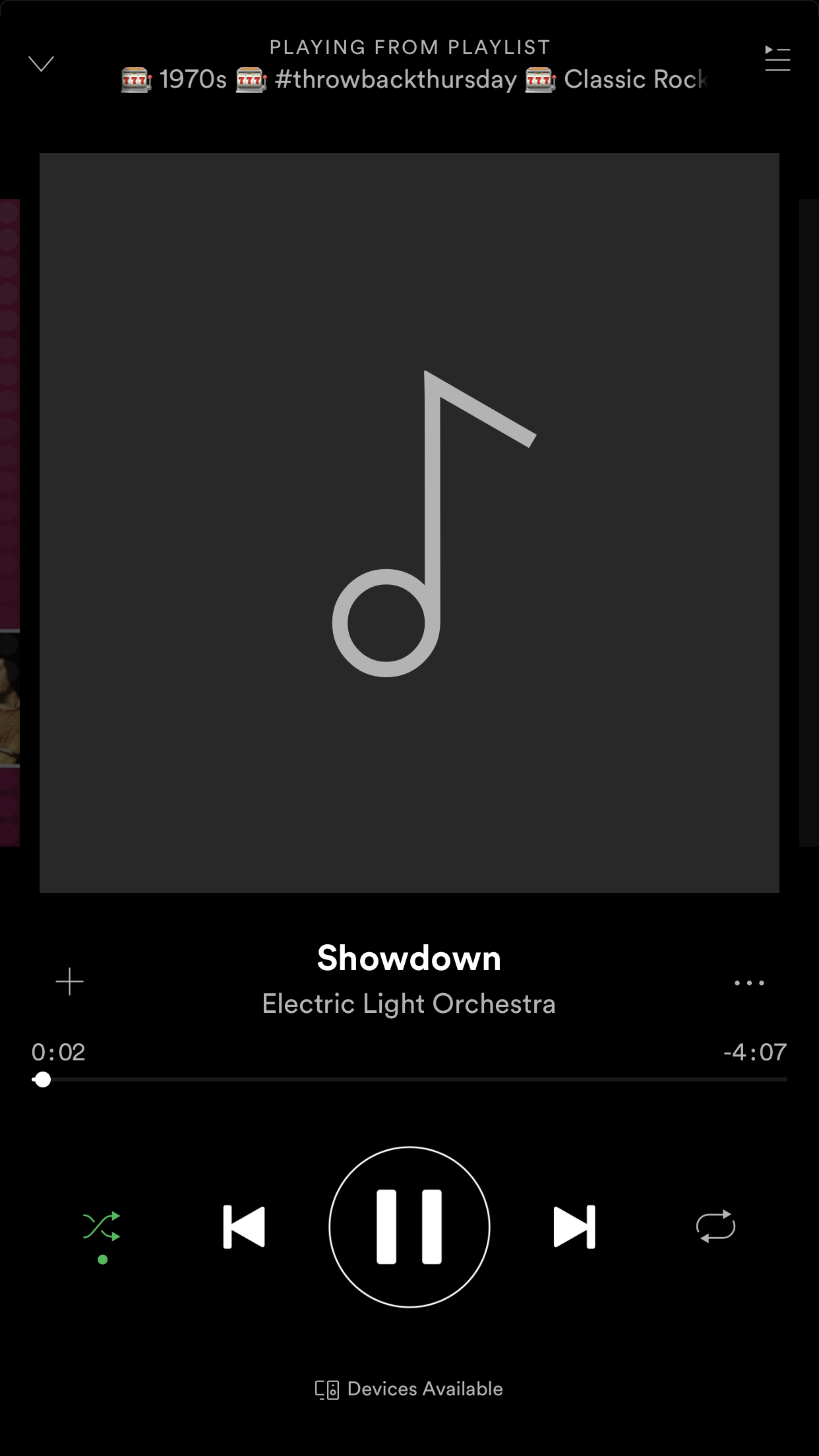 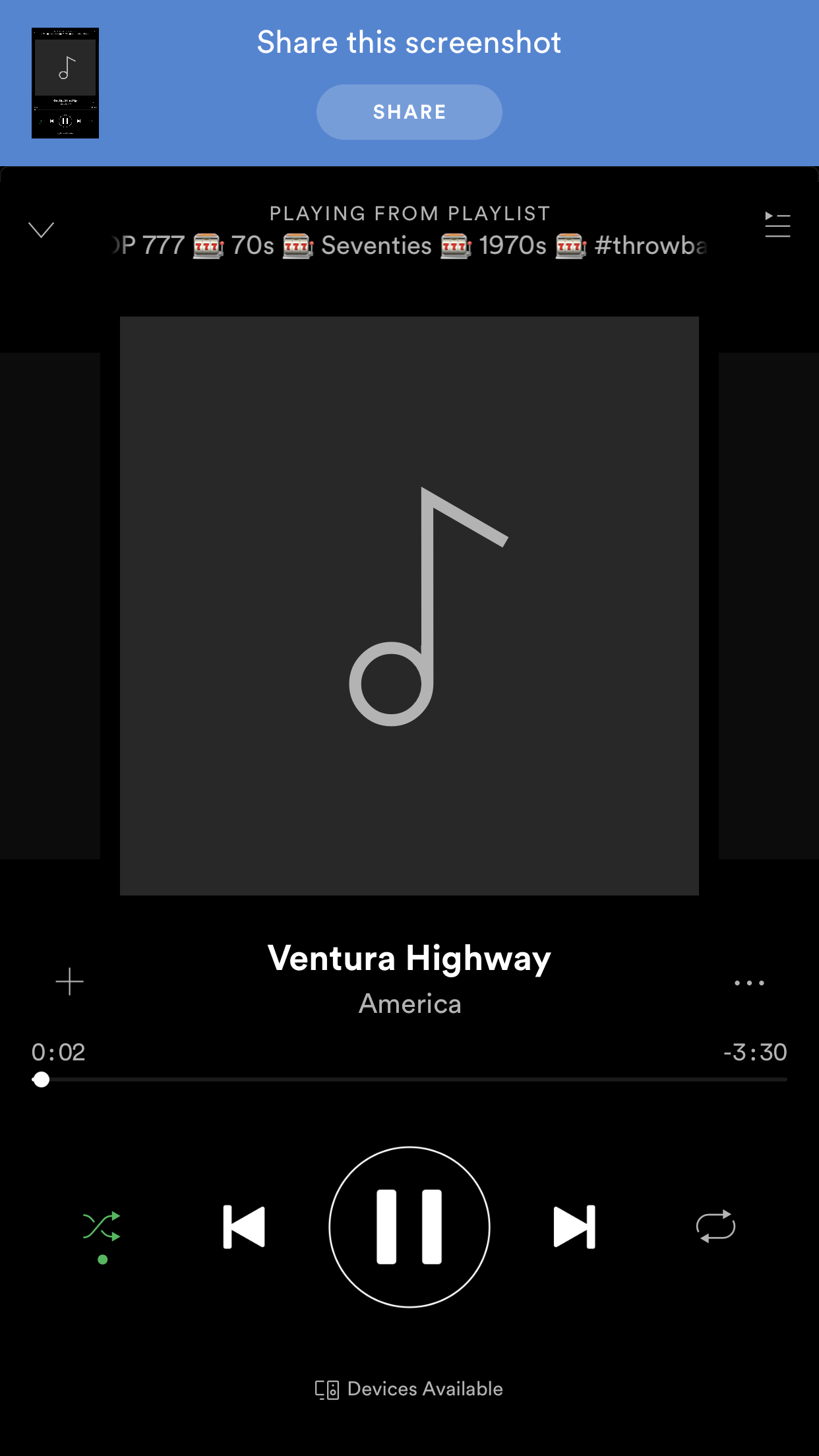 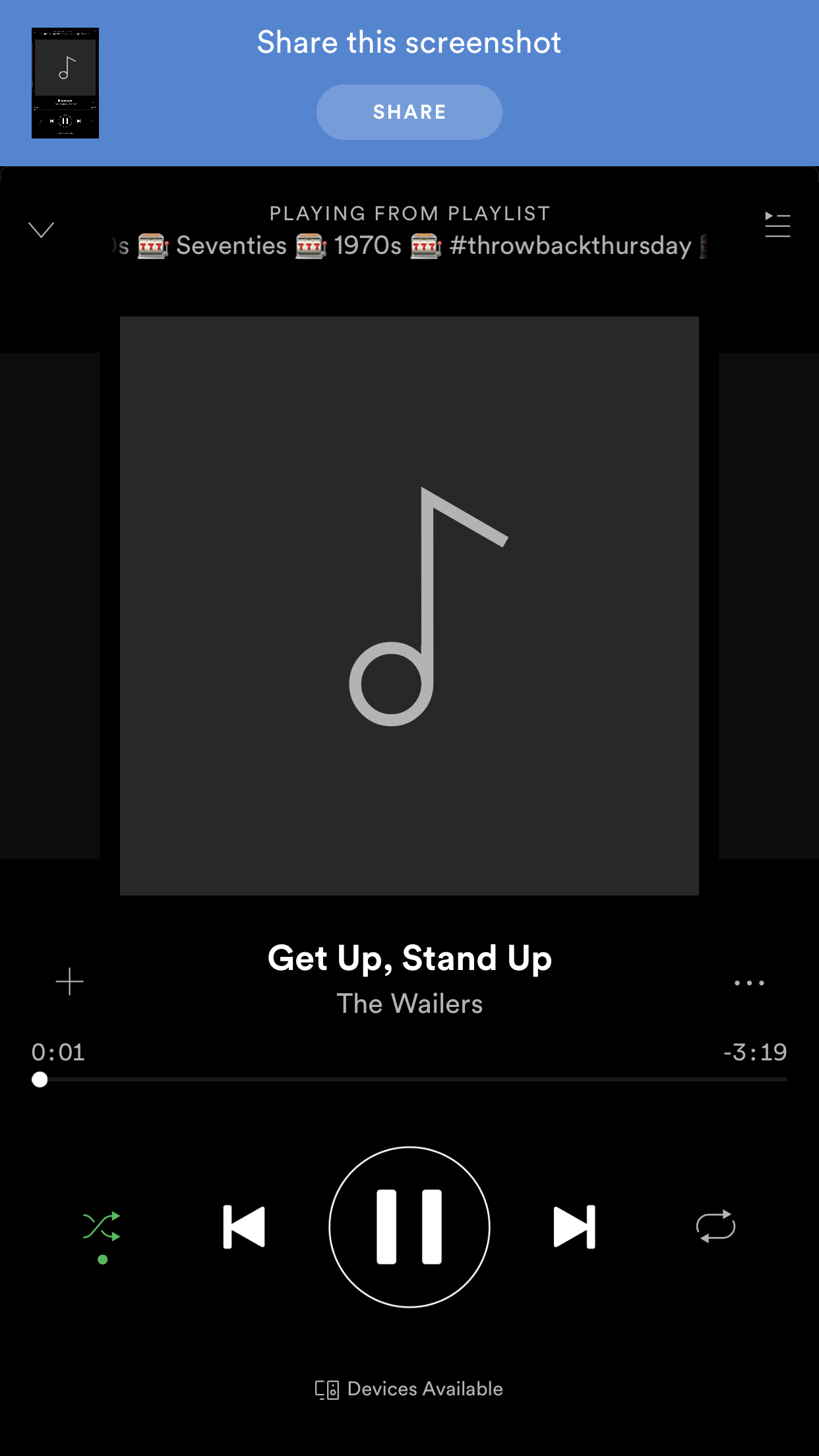 Thanks for getting back to us with those screenshots.

Are these songs/albums which you have downloaded for offline listening, or are they being streamed?

Could you confirm that you have tried a different mobile network? This is to see whether the problem is with your own network, or if it's more general than that.

They are all streaming. I very rarely use offline mode.  As far as switching networks, I’m not sure I know how to do that, if it is possible.  I am with AT&T.  I get LTE service most of the time.  There are pockets where I get 4G.  Both produce this problem.  As soon as I get on WiFi, it works perfectly.  That would be any WiFi network...work, home, friends, etc.  If you were asking if I could change networks other than AT&T, I don’t know how to achieve that.

Thanks for getting back to us with that information.

Would it be possible for you to use someone else's SIM and try on their network? The idea is to preserve the exactly same conditions (same phone, same app, same account) except the network so that we can isolate the problem. Hope that makes sense!

Ok.  It might be a day or so for me to find someone with an iPhone on a different network, so bear with me.

I did want to add an update, which is odd.  I have about a 1 hour commute to work.  About 30 minutes into my drive this morning, it started working perfectly.  I pulled up random playlists and songs...every album cover showed up.  Within 10 minutes, it went back to the problem again.  I have noticed some covers popping up, but they are on songs and/or albums I frequently listen to so I’m guessing maybe those images are cached from when I’m on WiFi?  I don’t know.  I thought it was strange that it worked perfectly on LTE for about 10 minutes then stopped.

Ill try what what you suggested and get back to you ASAP.

So I have run in to a problem.  My phone is locked to AT&T.  So I can’t use a different carriers SIM card in my phone.  Should I try a different sim that is also in AT&T?  I would guess that would be the same network...

Thoughts or any solutions?

Thanks for getting back to us and for being so patient!

We noticed in the screenshots that you sent us that the album art was from songs in the same playlist. Are you also experiencing this problem with other playlists? In any case, could you try creating a new playlist and adding all of the songs from the old playlist to it?

If in the meantime you can try with another AT&T SIM, that would be great 🙂

Let us know how everything goes!

It happens with anything....I can pick any song, from an album or playlist, doesn’t matter.  I did try another SIM on ATT in my phone and that didn’t help.  I did want to tell you that i tried other music apps and I don’t have this problem.  It is strictly Spotify.  I did notice something earlier and wanted to show you a couple of screenshots.  If I pull up an album and have it on the track listing page, the album art shows up.  Once I pull up the player mode, nothing.  I tried this on random albums, same with all.  Again, WiFi, it’s fine. 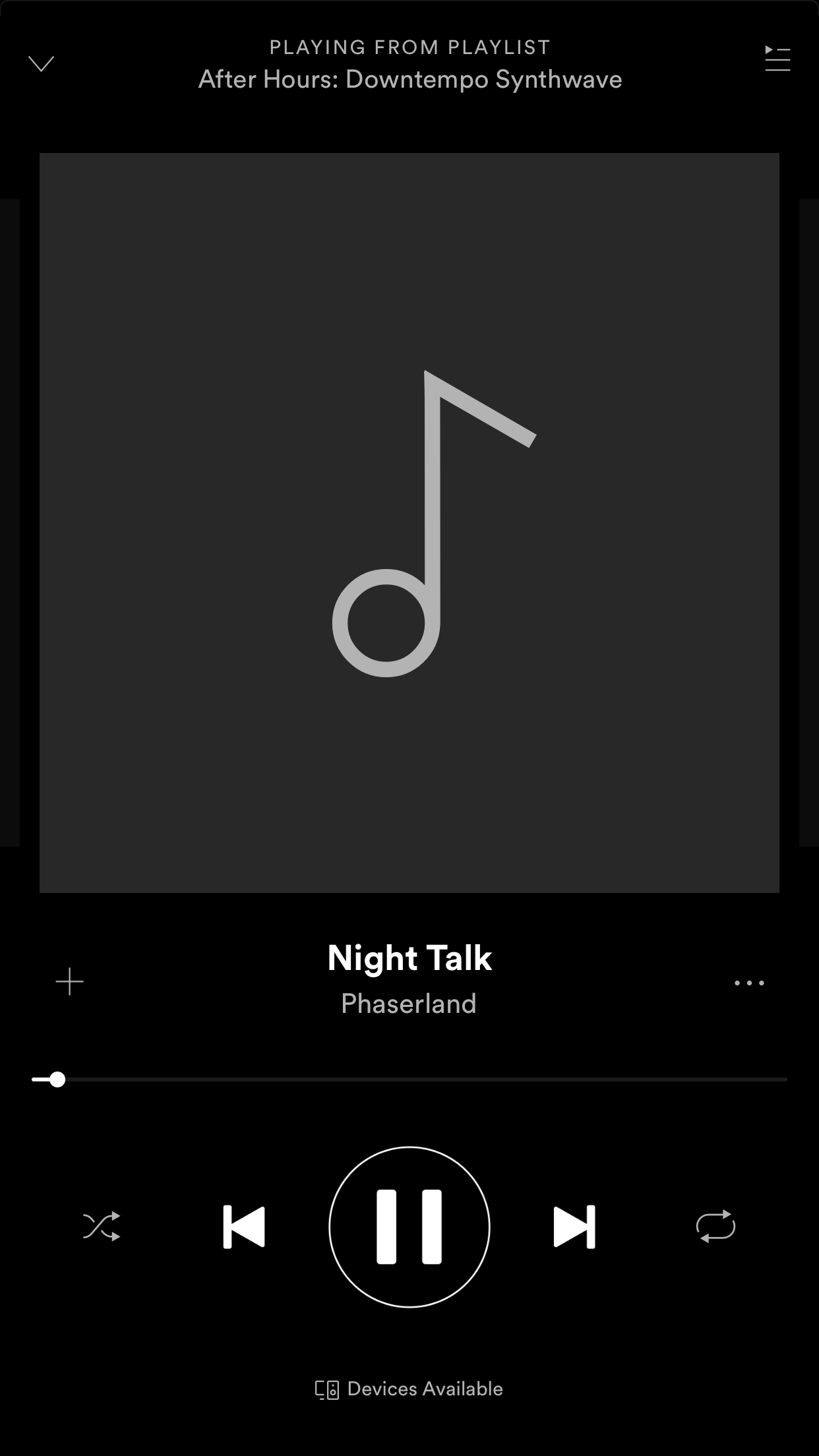 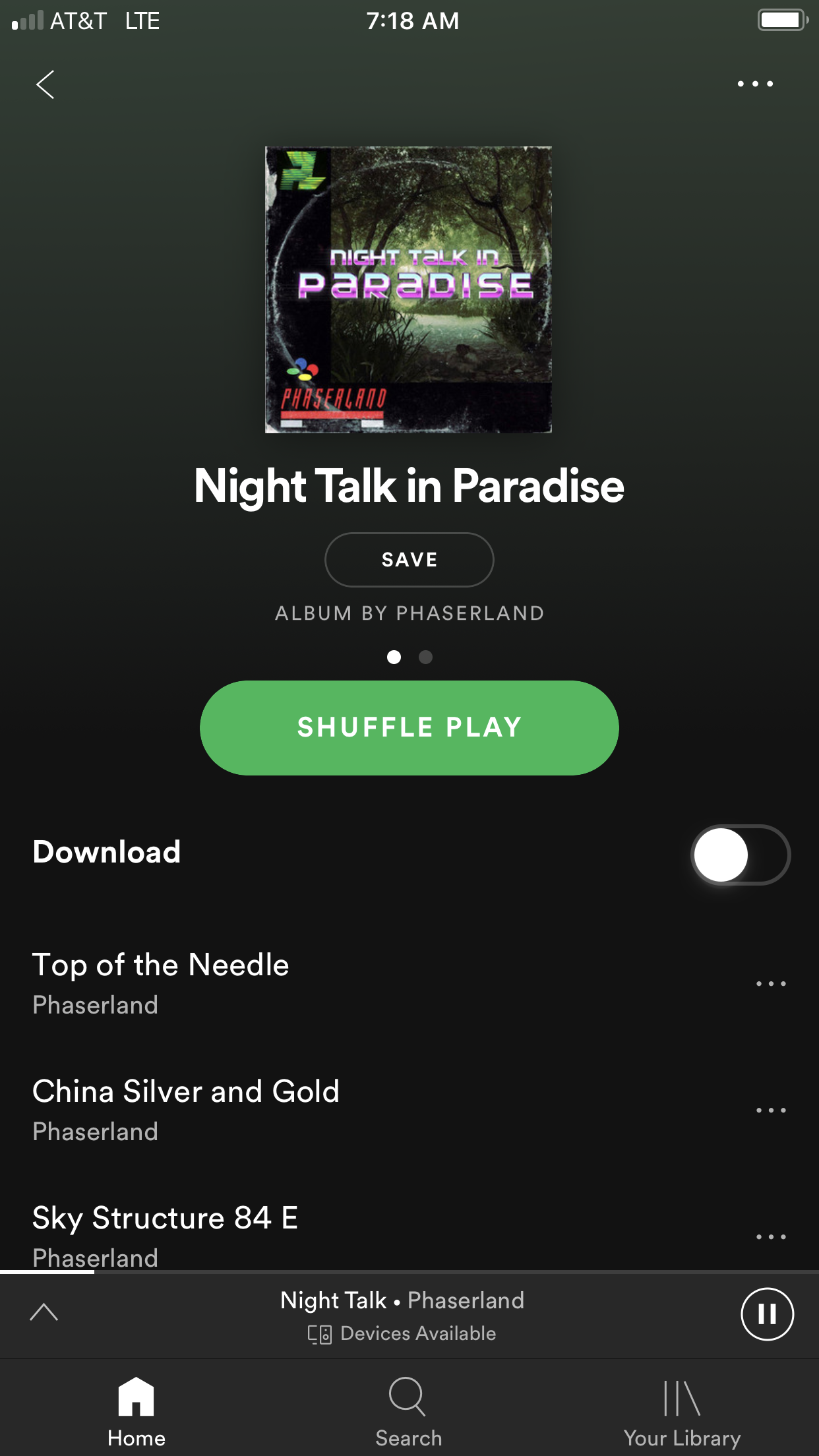 Thanks for getting back to us and bearing with us.

Would you mind sending us the following info:

Also, do you have any cache-clearing / battery-saving apps downloaded that could be interfering with things?

I take it there isn’t a solution/fix?

Thanks for getting back to us with that info.

It seems that this is indeed a network issue rather than an issue with the Spotify app, since we established that this isn't happening over WiFi and since no one else seems to have reported experiencing a similar issue.

Have you tried disabling and reenabling mobile data from your phone's settings? If that doesn't work, then we recommend that you get in touch with your mobile provider to ask them if they can suggest any further troubleshooting for your network.

I have lately the exact same issue as described above. When using the Proximus 4G / LTE network in Belgium it doesn’t show up Album art. When switching to wireless it works perfectly.
I don’t have the possibility to switch to another network but when doing the same thing on Apple Music it shows the Album Art.

it is not linked to a particular playlist. I can start any song and no album art is shown.
However I discovered that when I switch to WiFi it works perfectly and when I switch off WiFi and use the modular network it works as well for 2 minutes or so. Then it stops and no other album art is being displayed. I bypassed the cache function as I am always using new songs which I don’t know or never played.

Any suggestion?
I already rebooted the phone, deleted and reinstalled the Spotify App. It works perfectly though on Apple Music.

I honestly don't have an answer.  I still have this issue, although not as much as it once happened before.  I truly believe it is a cellular network issue.  I think Spotify demands a lot of data up front, and if the cellular network is not strong enough to provide it, we are **bleep**.  I'm sorry I can't help more.  This is going to be on-going issue for some time, I believe.

The problem is not with Spotify but with your iOS device. Sometimes it happens and I can understand how it feels when this happens.

Check the following article on iOS. This should probably gonna help you and if not feel free to mail me on that site. I will reply ASAP!

Not sure what SIRI settings has anything to do with Spotify Album Art but nevertheless I tested it and it does not work.
I don’t see any album art on a cellular connection. From the minute I change to WiFi they appear.

I am using Apple Music as a workaround as it works perfectly with Album Art. I will use this until it got fixed.

by the way: I have a full 4G network connection and no bandwidth issues so they should appear.
yesterday I tested it with a SIM from another provider and faced exactly the same issue. Hence, I don’t think this is a cellular issue; it is Spotify.