I got a new watch, which is running the latest version of watchOS, and it will not start downloading songs to the Spotify app on the watch. It’s not the same as the ongoing issue (songs get stuck at the first download) — the downloads section in the watch app just says "Loading..." forever. For reference, the old watch is removed from all my Apple accounts, erased, and sold.

- rebooting both Watch and phone.

Before I got my new watch, my old watch (series 4) was updated to watchOS 8.1 and had downloaded songs in that section of the watch app. However, these downloads were initially done prior to watchOS 8.1. I don't recall manually initiating a download to my old watch after it was on 8.1. 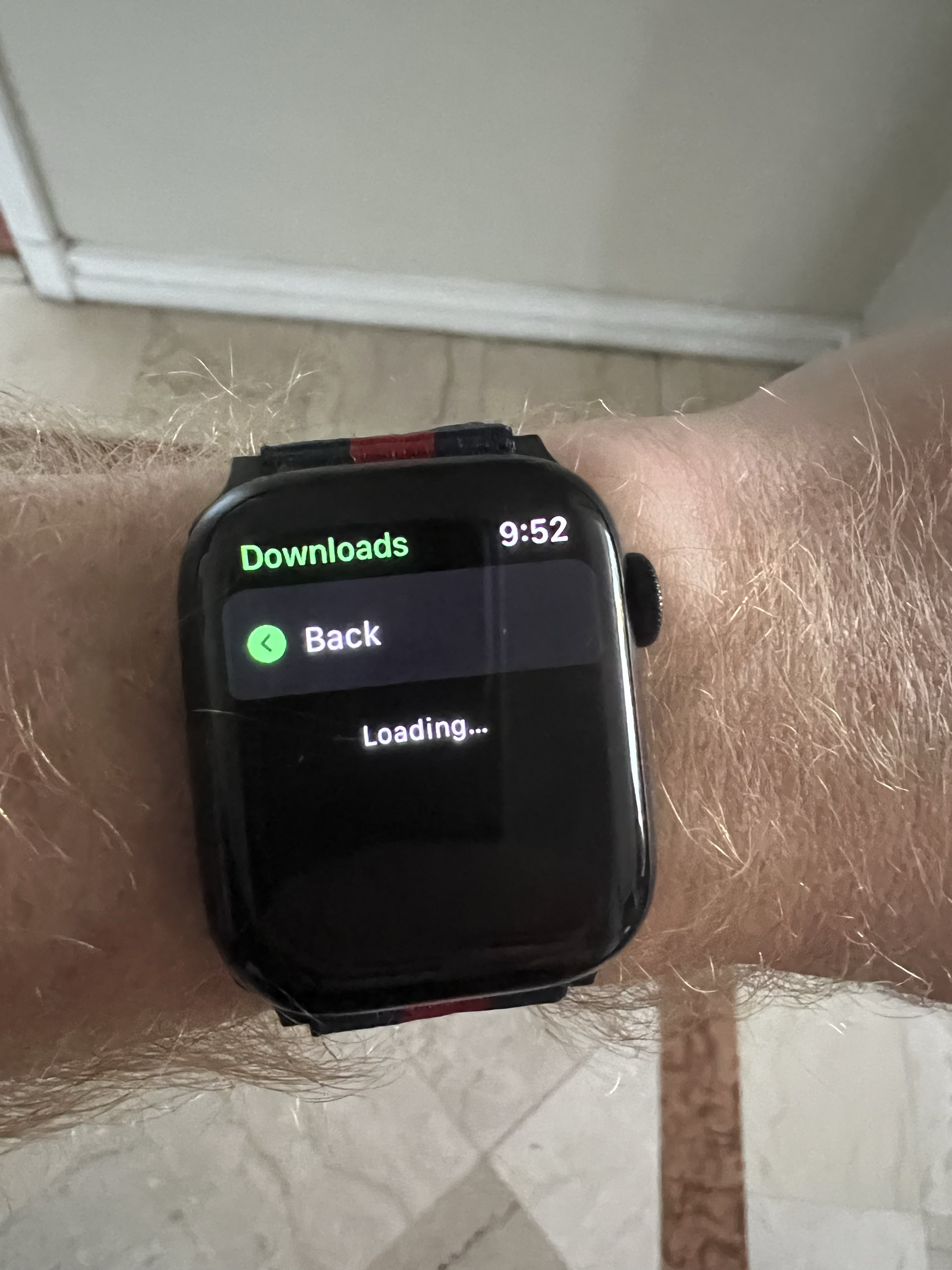 Having the same issue. Have Series 7 with GPS+Cellular and I'm getting stuck at the exact same screen. Everything worked fine on my Series 4 watch without a problem, but all of a sudden my new watch can't download anything at all.

Same here as well new series 7 watch that was working with an iPhone 7 last week, upgraded to the 13 Pro Max yesterday and now the downloads to the watch just get stuck on loading.

llibshutz23
Casual Listener
Also upgraded my phone along with it. I remember that with my Series 4 and 13 Pro everything (I think) was working fine, but as soon as I switched watches everything went haywire
Reply
1 Like

In messing around, I was able to get it to work again.

I logged out, uninstalled from my phone, rebooted both phone and watch, re-downloaded on phone (reinstall on the watch occured automatically), and then logged back into the app on phone.

I went to the watch app and noted that the "Downloading..." message was still there. After a little while, I got the notification on the watch that streaming was available. Based on one of the suggestions in the main watch download/playback thread, I actually tried to get it to stream from the watch itself to my airpods. It had a hard time connecting to the airpods but eventually did so after I force quit the app on my phone. At that point, I noticed that the "Downloading..." message on the watch was gone -- it said something about adding music via the main app. I was able to download normally via the phone app after that.

So I guess the issue might be that the watch app has to stream directly once before it will permit downloads? That is definitely not how it worked on my old watch/pre-watchos 8.1, so I'm still going to assume there's an unexpected bug.

@empeimaj2 I have tried that and when I click the watch logo in the spotify app on the watch, it just sits on loading and never actually connects. Did yours take a while? Or did it connect pretty quickly?

Mine was having all the same issues. I contacted Spotify and they said I had a corrupt device somewhere. They removed all devices and I reinstalled the app on my phone and it worked. It then asked if I wanted the app to track with other apps and I put "do not allow" and it stopped working again. So I redownloaded it and allowed the app to track and its working again. So I think that notification makes a difference on if it will download or not.

The folks at our tech team are currently looking into this, so make sure to vote for the Ongoing Issue here, if you haven't already.  Make sure to follow the steps provided in the Status update.

It'll also be useful to Subscribe via the three-dots menu in the top right corner next to the title. We'll be sure to keep you updated with any news on the matter there.

Still not fixed. I cannot download new songs for my runs which makes the watch app pointless for me! Come on Spotify, this is broken for at least 3 months now, with upgrading spotify several times, currently running the latest version. Thinking about switching to Apple Music...

Thank you for reaching out on this thread.

Could you please confirm which troubleshooting steps you've tried so far?

If you haven't tried any, then we suggest you head to this thread which is currently handling this issue. There you'll find some troubleshooting options and if the issue persists, you can add your +Vote and device info so we can pass it onto the relevant team.

Actually problem is an option which can be resolved also by reinstalling the app. If you don’t want to reinstall then In your IPhone there is an option

as usually I keep it off but it doesn’t allow Apple Watch to download so as you turn it on it will start working.

Thank you for your reply in this thread.

Thanks for the posts and info on this topic!

Don't hesitate to reach out again if you have questions.

I tried both solutions presented here (allow tracking, disconnecting the bluetooth), yet the problem still persists for me. The song/episode is stuck at "downloading".

The folks at our tech team are currently looking into this issue, so make sure to vote for the Ongoing Issue here, if you haven't already.  Make sure to follow the steps provided in the Status update, as that's been reported to fix the issue for some community members.

Hope this helps. Don't hesitate to reach out again if you have questions.

i have the watch 7, running os 8.6, iPhone 13 pro running the latest ios 15 - I've gone through all the troubleshooting and cannot get my songs to redownload - this is after the watch app crashed on me during a run.

finally got it to work. you don’t need to enable app tracking.

4. reopen spotify app on phone which should automatically reopen it on your watch as well.

5. check downloads on watch to see the progress of your downloads update.