"Star'ing" a song was a great and simple way to add to and curate my "current listening" list that no other streaming service had. Now it's just the same as XBox Music and Rdio.

Having those songs split across My Music collection is daft, and mutliple taps to add a song to a "My Starred" playlist is a poor replacement.

Why did you get rid of this easy to use and convenient feature - and when can we have it back?

Yeah, what happend to the Star function... now i can't keep track of what is already on my list...great..

Also why in the world does the IOS version of spotify not have a Scrolling feature.....

The "Star" function does only work when online.

So it does not work at iPod Touch now!

I had heard that you added a save feature and I thought that was great. But I am very upset that it replaced the starred feature.


I had heard that you added a save feature and I thought that was great. But I am very upset that it replaced the starred feature.

First of all, you can still save whatever you want to the starred playlist. It hasn't gone away. Aside from that, what is the difference between saving everything you like in Your Music versus saving it to a starred playlist. You have the exact same control over what you save. The difference is now you can actually browse by artist and album if you choose. No one is saying you have to use it that way though. If you take a little time to get used to the new system, I think you'll find it's extremely similar to what you're used to doing. Hope you enjoy it. 🙂

dinomightRock Star 10
Help others find this answer and click "Accept as Solution".
If you appreciate my answer, maybe give me a Like.
Note: I'm not a Spotify employee.
Reply
0 Likes

Starred is a playlist. My Collection is a collection of all the stuff I want to remember or have regular access to.

My starred playlist was my and many others way of curating their personal playlist. Further playlists provide the playlist radio functionality. This has become one of my key ways at encountering new music I like, as a radio station based on my starred playlist will invariably have an interesting seleciton to offer.

I understand that I can still add songs to my starred playlist, but rather than a quick tap it has become inconvenient now and that is bothersome.

When I hear the save feature was coming I was pleased because I do think it adds a great and desired functionality, however I by no means think it should have replaced the starred mechanism which was honestly something special about spotify.

To any new users who arrive now, the whole concept of the starred playlist is missing and they for all intents and purposes may never discover it.

I think this just a bad move, making yourselves more ordinary

Hey, you can vote for the return of stars here.

The STAR was literally my favorite feature on Spotify.

I could be driving down the road, hear a song on a Spotify Radio station, click on the song, FLIP THE ALBUM OVER (this was great for those of us who don't like the tiny 10 pixel "..." button) and easlily STAR the song for suture listening.

It's just too much drilling down and treats the starre playlist like every other playlist. I enjoyed being able to go through my starred list, and adding each song into their own lists later when I had more time.

I am a Spotify user exclusively now, no more Pandora, and the STAR was the number one way of curating music for me.

BRING IT BACK PLEASE!!!!

Also why take up so much room with a giant SHUFFLE PLAY button and get rid of the STAR altogether? Someone has been misleading you. The album flip was a way easier to use inteface.

adrian142
Regular
I want both the Star and the Album Flip back.

BTW, on Windows Phone Spotify has the Star function still available and I wonder whether it couldn't be implemented on iOS this way, too (see screenshot). 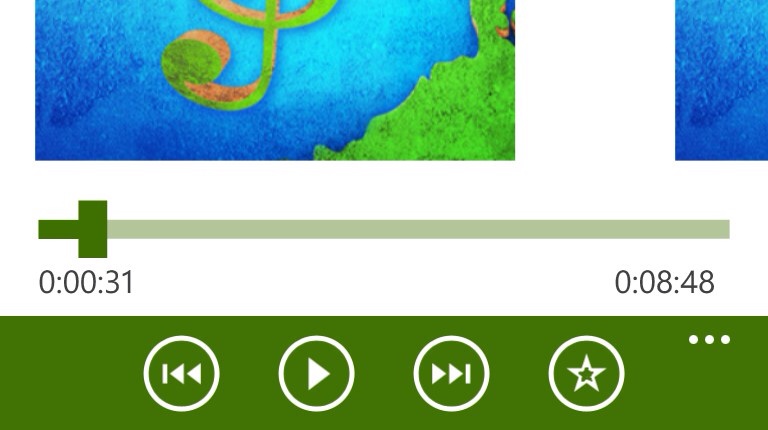 100% second that emotion!  Use the feature the same way you do as well as a method to quickly tell if I already have this song "somewhere" in my collection.  If it's starred, I have it accounted for - helps me avoid duplication.