I have been attempting to use Google Assistant to shuffle my Spotify playlist for a while now. I know that Google understands my command because when I say "Ok Google, shuffle [name of playlist]", Google Assistant responds "Ok, I'll shuffle your playlist [name of playlist]". But then when the playlist starts playing, it is not shuffled and just plays from the beginning and in order. I believe that this is a bug with Spotify because Google seems to understand the command and have the correct intent and Spotify just has the incorrect behaviour. I have a Spotify premium account and believe that this should work. 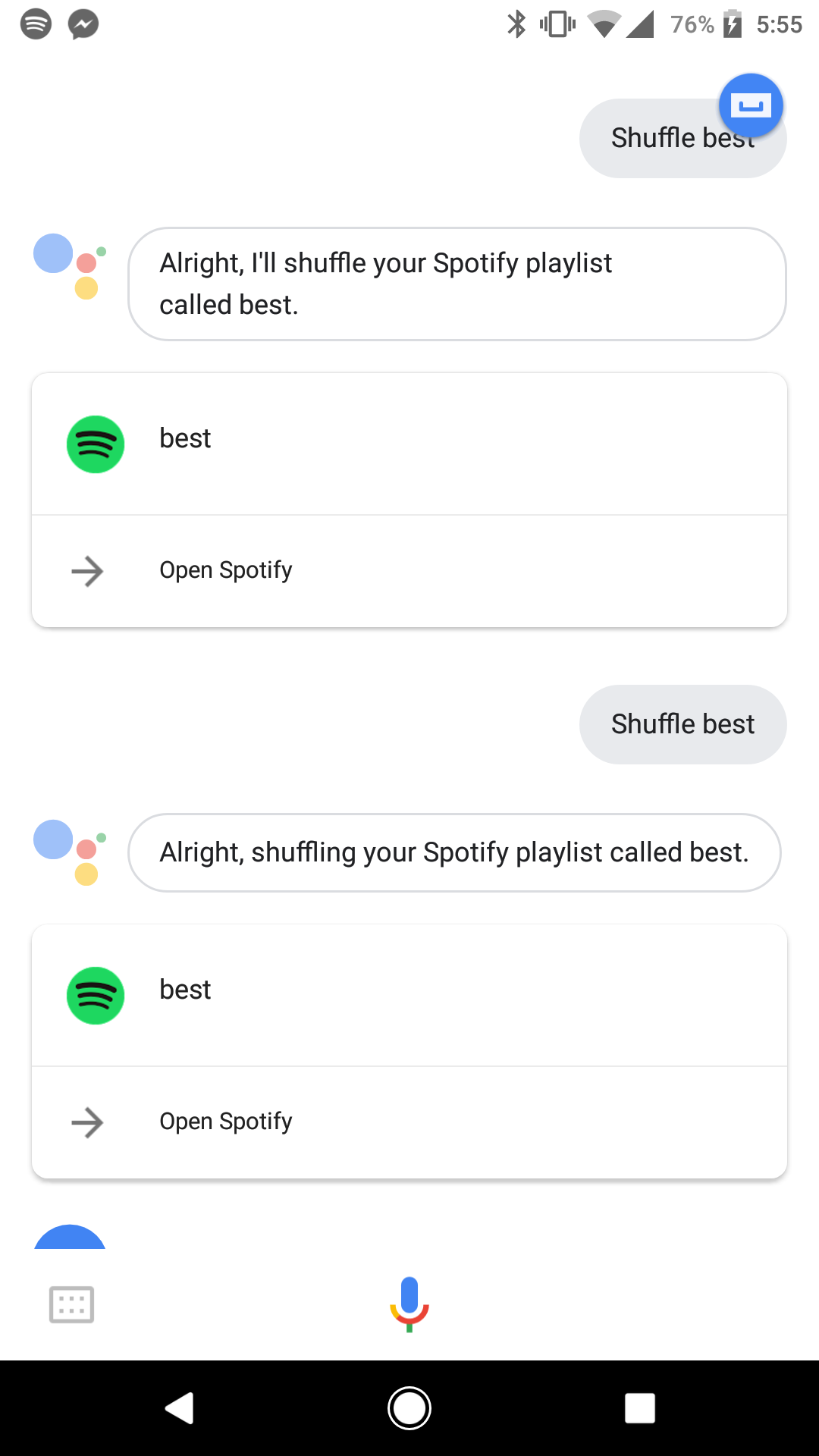 Just to confirm, the command does work with Google Play Music.

The accurate answer would have been "it doesn't work for me". I just retested with a new playlist in GPM and it worked . Does Google need updating on your device?

I can confirm that I have this issue as well, and am running on 7.0 Nougat.

Google Assistant says that it will shuffle my spotify playlist, but every time it just plays my playlist in order from the first song.

A fix to this would be much appreciated, as each time I have to press the shuffle button, and then press next song, in order to actually shuffle my playlist.

The shuffle command does have a known issue - it will always play the first track and shuffle the rest. Maybe this is what happened?

I can't be sure if that's what's happening for everyone. But I know that for me on Spotify I can ask for the next song in the next song the next song and it plays the playlist in order. After specifically asking for a shuffle and getting a response in the positive.

I can confirm this. Happens for me as well. With Google Home it works fine, not with Google Assistant, though!

The same Problem here. But if I say "Shuffle play"  as a command it does work.

Thanks for your reply.
It works fine with Google home, but not on my Android with Assistant and
Spotify app.
The Spotify app won't shuffle

Dear developers, will you please include shuffle play for specified playlists in Google Assistant? That would be awesome! Thanks
3 Likes

I got the same issue aswell and tried the solutions on the thread. Using Google assistant on OnePlus 5T.

So did the shuffle verb work for you?

Not working on my Nexus 6p.

I can also confirm on my S7 that this is still an issue.

For clarity: I will say "ok google, shuffle <playlist name>."

And following that it just plays the first song. Not too big a deal. But no matter how the song switches (first song ends, I click 'next' in spotify, I say "ok google next song", or whater) it always just plays the playlist in order. No shuffling.

Forgot to mention it didn't solve my issue *

It has improved very slightly for me but still completely useless.

I have a playlist with 7 bands.

It now shuffles songs from the first band only. Using Google Home Mini.

I actually tried it via Spotify Web and the shuffle was almost as useless.

I got the 3 month offer and I like any song selection but if I can't build a big playlist and have it properly shuffle then it's of no use whatever and I will keep buying cheap MP3 albums for my phone and playing via that.

Shuffle is standard functionality in all music players. How can it be so hard with Spotify?

I just started the Spotify Windows app and checked that the playlist was on shuffle.
I clicked to the last second of the racks for 8 minutes and it randomly selected tracks only from the first band added to the playlist and no others. The first band constistutes about a 6th of the playlist tops.

OK, sussed it. I watched it play on the windows app. Spotify Shuffle is stupid.

It does plus or minus a random number of tracks from the one you are on (between 10 or 20 ish).

The next track was always within a short scroll of the one it was on.

Basically you have a random play of a maximum of 40 tracks that might drift slowly through your playlist or reset to 1  if 4-20 is crurrent - shift value fpr example.

What's wrong with pick a track between 1 and max track number.

Pretty certain that is what my Samsung phone does but with a range in the +- 120 ish so it took me a while to sus that one on a playlist of 1300 songs. I applied my suspicions to visial evidence of the Soptify Windows application. Try it for yourselves.