Having a play now.

Also, is it just me, or does the loop/random setting in the player not seem to last? Everytime I open I have to re-enable the options, which is a bit of a pain! Is there anywhere we can officially leave feedback?

I added this to the thread: http://community.spotify.com/t5/Mobile-Android/quot-Official-quot-new-application-beta-release-missi...

As good a place as any

I have a brand new issue.

I was on my way to work this morning and I was playing a shuffle of my starred items. I went through about five songs and when it got to the sixth I got silence. The song slider was moving on the bottom of the screen like it was playing, but there was no sound. I thought maybe the song had a pronlem so I hit skip and the same thing happened to the next song, then the next. I was driving so I couldn't really play around with it, so I exited and used another player to listen. When I got to the parking lot at work, I went back in and it worked fine. Wierd.

I ran a problem of the app going into offline mode and staying there despite have a data connection.  I tried force quitting, but that did not work.  I uninstalled and reinstalled.  The problem seems to be fixed now, but just wanted to see if anyone else ran into a similar problem.

I have uninstalled and reinstalled dozen of times, but it stays offline if not on wi-fi. As does the stable version.

Anyone know when its being released properly?

I'm having trouble with synching (over WiFi). It's never been very stable, but now it freezes the phone (Samsung Galaxy S) almost every time the screen is locked, so I have to sync while plugged to keep the screen on. And it gets worse: whenever it freezes, it loses ALL downloaded songs.

They are there, taking memory space, but Spotify seems unable to recognize them. Sometimes if I try to resynch the same playlists, the songs appear inmediately as downloaded (so Spotify can actually read them), but that doesn't happen that often.

I already had problems synching with the previous version (app crashes, synching just stopping), but at least it never meant losing downloaded songs.

BTW, I know it's been said, but choosing where to download your files (i.e external SD) is indispensable.

First, the "new" Spotify app for android is great! Newer look and feels upp too date and fresh!

But Since my Samsung GS2 Updated today (ICS Update) It will not show the Lockscreen Play/Pause etc feature??

U guys working on that, or am I the only one so far...

Not sure if this is the right place to record this bug, but I noticed today that the app seems to think it is playing different songs - it was actually playing the one in the notification bar, but showing a different one in the app. 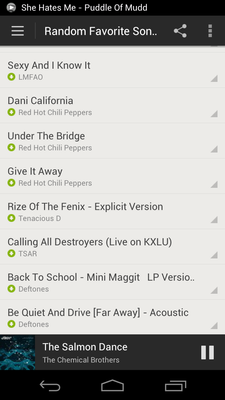 
Not sure if this is the right place to record this bug, but I noticed today that the app seems to think it is playing different songs - it was actually playing the one in the notification bar, but showing a different one in the app.

Hi. This is one of the various issues that crop up when returning to the app from elsewhere. I logged a few of them here: http://community.spotify.com/t5/Mobile-Android/Preview-app-glitches-on-returning-to-app/td-p/47103. Hopefully all solved once this version of the app goes live in the Play store

Roridge
Casual Listener
Cool... I figured someone else would have seen it but thought it was worth posting 🙂
Reply
0 Likes
Marked as solution

Yes, I have noticed this problem too

olbo92
Newbie
Sorry dude, u wont get sense 4. Think your getting 3.6 or something
Reply
0 Likes

There is no more last.fm scrobbling in this version?

Also, my menu button doesn't seem to do anything any more ? The ''back'' button still works.

licenced
Community Legend
Both true. Scrobbling will definitely return when the app goes live on the Play store
----------------
Listening on Windows, Android and Sonos. Tweeting it at @davelicence
Reply
1 Like

Thanks, will the menu button have a function again in the future or not ?

When you scrolled a ''scroll bar'' appeared on the right you could grab and use to scroll quickly.

To be entirely honest, I'm probably going back to the ''official'' old version, ICS version looks slick and runs smooth and is definitely an improvement in many places, but also lacks functionality from the old version.

Oh and seems to have exactly the same issues as the old version ( upgraded hoping they fixed it).

I have a local files synced playlist from pc that is synced wrong, opening any song from that playlist on my phone causes Spotify to crash to (phone)desktop without any error messages, I know I can fix this by clearing cache and resyncing, but hoped it wouldn't be required and that they fixed problems like this in a new version :(.

licenced
Community Legend
Fast scrrolling is still there - grab the bar and drag as before.

No idea if the menu button will be changed back to how it used to work.