I know this has been asked before as like 2013, but that is some time ago and doesn't apply anymore.

Spotify suggests four external sites to convert iTunes playlists to Spotify, but none of them is working.

How can I import a 3000+ songs iTunes playlist to Spotify (latest iTunes version for Mac)? 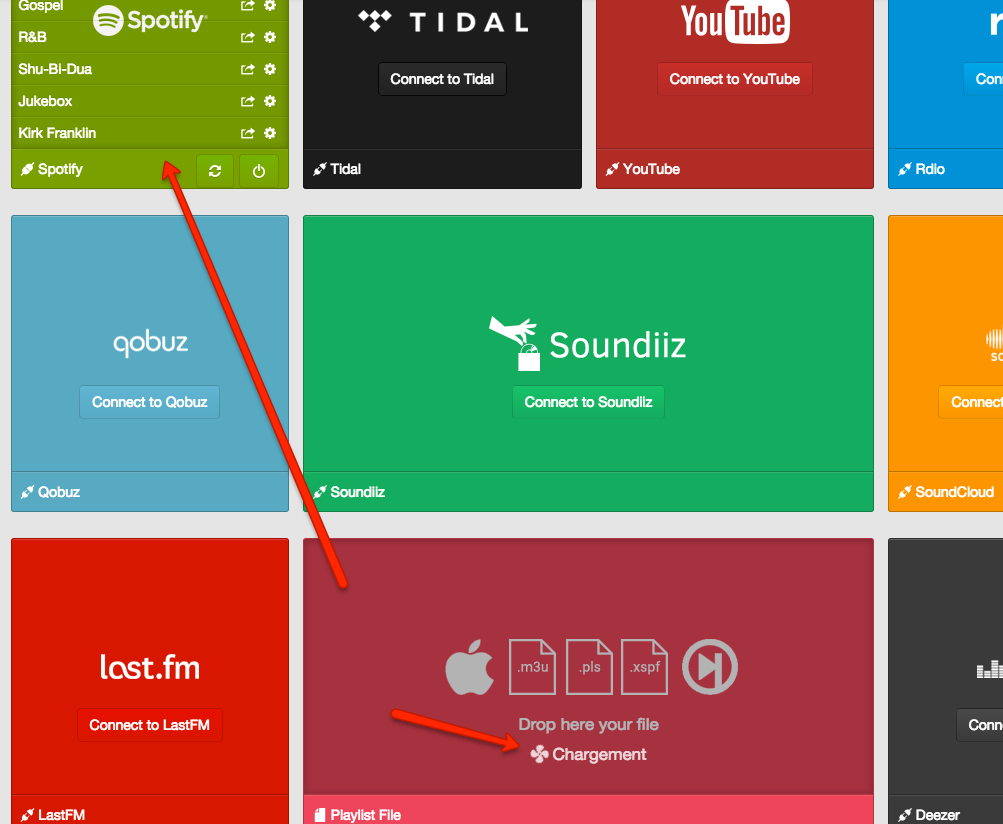 I took these steps:

2. Go to http://soundiiz.com/#/converter -> Login the Spotify box with your spotify account -> When login succesfull, drag and drop the m3u file in the pink apple box. Then wait for a while and the playlist will automatically be in your spotify account.

I have the same issue. I want to make the switch from Apple Music (which drives me crazy) to Spotify. But all of a sudden it's not possible to convert your iTunes playlists anymore. Please help.

Yes you can use Soundiiz, it works for that case 🙂

Thanks this seems to work for me!
Reply
0 Likes

Sorry for asking, I might just be confused, but when you refer to Soundiiz, do you mean the big green Soundiiz converter box like alle the other converters or the Soundiiz.com website?

I would think you mean the green Soundiiz box, but in my mind this is a convertion from an iTunes playlist to a Soundiiz playlist, not to a Spotify playlist.

I tried connecting the green Spotify playlist converter box in the top left again and again dragging my singkle number playlist (just one single song) to the drop area "Drop here your file", but once again the prepella just keeps spinning for hours, so I am unsure whether I am doing it right

There is no iTunes converter to choose, only a dropzone, that, as I mentioned, keeps spinning without converting because what should it convert til since those selectable is the source, not the destination.

I took these steps:

2. Go to http://soundiiz.com/#/converter -> Login the Spotify box with your spotify account -> When login succesfull, drag and drop the m3u file in the pink apple box. Then wait for a while and the playlist will automatically be in your spotify account.

This is fine if you want to import some music that is already in Spotify. But in my case I am figuring out how import a playlist with local file instead of select file by file from the "local files".

Many thanks. I think the problem must have been something else since that's exactly what I did. I made another try and this time Soundiiz found 153 songs and imported 93 even though Ivy imported 1,902 songs out of 3026 songs on the same playlist (other export format).

Thanks for pointing out the way to do it. It's not your fault Soundiiz didn't import more, but I guess it sort of succeeded.

Thanks razrrb for that, however it took a bit if finding in itunes, I have the pathway as:  itunes - File - Library - Export Playlists.

I've just uploaded about 10 playlists at a high conversion/success rate, but I can't do anymore now as I keep getting an error 'No Title was found on Spotify - Result of the Conversion - Undefined.

Also, when playing through the Sonos app it keeps jumping off the seleted playlist into another one.

Anyone have any way to fix these two issues?

rushimw
Casual Listener
not all songs get added to the playlist. some fail to convert. help please. thanks
Reply
0 Likes

I've just done this and it said almost all of my songs imported successfully, but my playlist hasn't shown up in Spotify yet - can anyone help?

EDIT: Never mind - it's showing up now. It's done other weird things like make all of my playlists private and messed up the folder structure of my existing playlists, but nothing I can't work around.

This is only a partial solution because it only imports those songs that are found on the Spotify network.  What about the songs we own locally, that are not found on Spotify?  Well, this conversion process totally wipes those out, like they don't exist, instead of including the titles and giving us the option to download them locally.  This is NOT a solution as far as I'm concerned.

Yes this is a problem when using soundiiz, it does not import the local files that are unavailable on Spotify.  Therefore not a complete solution.  Have you figured out another method??

That's because they are songs that you own but they are not available on Spotify.  What it SHOULD do is at least import the title of the song so that after it's done you can go to the playlist and turn the 'download' on so that it can retrieve the song from your local files.  HUGE glitch in my opinion and something that should be fairly obvious to these people and not very hard to fix.

sonos1970
Casual Listener
No I haven't, any ideas?

Gettinrad
Music Fan
Well, let me start by saying none of spotify's 'solutions' were completely successful. I'm not why they can't get things right by now. So I was left basically on my own to figure this out. If you have a lot of songs that you store locally which are not in Spotify's catalogue then the soundiiz method for importing is virtually useless, as it does not import the titles that it can't find in spotify's catalogue, and For those of us who have thousands of these such titles, what are we going to do, add them manually? NOT. My initial problem stemmed from the fact that the import feature in Spotify was not working for me on my Vaio laptop. When I clicked on import>iTunes, nothing happened. So Spotify's ultimate solution was to use the soundiiz method which as I explained was virtually useless. Luckily, I was able to install Spotify on my sons laptop. I then copied the iTunes music library.xml file and the iTunes library.itl file from the vaio to the iTunes folder on the Mac. I did not have to copy any music files over, ONLY the two library files. So I get into the Mac and try the import option in Spotify, import>iTunes, and it works. So there they are, all of my current iTunes playlists in Spotify. Lastly, I turned off the Mac and went to Spotify on the Vaio laptop where the actual music files are stored. Spotify the synced up all the music files with the titles in the playlists. I know this sounds like a silly, bs way if having to do this, but what else was I gonna do? Maybe someday Spotify will clear up this issue, but until then at least I have a workaround.
Reply
0 Likes

sonos1970
Casual Listener
Thanks very much for the detailed response. I'll give it a try & let you know how I go.

This doesn't seem to work unless the songs are in the spotify library... which kind of defeats the purpose of adding local files.

Gettinrad
Music Fan
You're right, it doesn't work unless the songs are in the Spotify library and is not a solution if you rely on local files that are not in Spotify's catalogue.