This is bad. There are fake artists with a single song getting thousands of listeners by accident, by using another famous artist's name.

This Friday, these included OMD, James, Squeeze and Harpo, Wigwam.

How can we weed them out?

Hey @jkeinonen, welcome to the Community.

Hope you are having a great time!

Please try to look at the other end of your image, when you hover to a song 2 icons should appear at the end of the song's metadata ♥︎ and 🚫.

Hope I was able to help 🙂

LoxerSpotify Star
Help others find this answer and click "Accept as Solution".
If you appreciate my answer, maybe give me a Like.
Note: I'm not a Spotify employee.
Reply
0 Likes

Does the algorithm understand that I do want to listen to the real OMD and not the fake one?

If the fake OMD (etc) has their own artist page, it should only block the fake artist. If not (i.e. most likely), it will also block the real artist.

I would try and report the artist/song, or just put that you dont like it with the do not like button!

My release radar is quickly becoming completely useless because of this issue.  They really need to ban these scammers who are stealing royalties.

Yes, the problem has returned in recent weeks. Today I see Electric Light Orchestra in my Release Radar, when I click to see more information it's really "El'o". And the writers as "Glenn Carter" and "Otis Dupree". The lyrics are rated as EXPLICIT.

Another, different problem (with PC player) is that real and honest artists with the same name get mixed. There is a Finnish songwriter called Hector who started his career in the 1960's that I listen too. But now I get a (likely American) rapper called Hector in my release radar as well.

Same problem here. I like the rock band The Cult and the punk band X, and now I'm getting all kinds of hip hop bands showing up in my Release Radar with the same name as the bands I like. Worse is in the last week or two I'm now getting bands that don't have names close to anything I like and none of the "Fans also like" artists are familiar to me.  A lot of these weird bands that are showing up in my Release Radar have only a few hundred to a few thousand monthly listeners and no discography.  They're just new artists starting out.  Why is this happening? Are they paying to be promoted and placed onto people's Release Radars?

I get fake artists in my Release Radar every week. This is not a new subject, and Spotify does nothing to stop it. We users can flag them how many times we want (I did), and the results are zero. This week alone I got 6 (yes, six) of them. I've highlighted the names below of the real bands or artists they are using. (Yes, I like prog.) Since Spotify devs are not able to come out with some form of artist ID or an algorithm to solve this, so I'll propose one: Whenever a prog / classic rock band (er... many don't even exist anymore) releases some $h1t-y song from a completely different genre (usually some hip-hop variant), it's fake. How about that?

Could the Spotify artist data and the algorithm be SOOOO stupid, that they don't assign a one-and-only data identifier for each artist, so they wouldn't get mixed up?

Where the heck are they wasting their billions on, if not protecting the artists that create their profit?

This happens to me week after week and it's getting really frustrating. I'm getting fake artists with < 1000 listens co opting the profiles of famous artists. I report them but it still shows up every week. Last week it was a fake "Lemon Jelly" release this week it is someone pretending to be "Danny Brown". 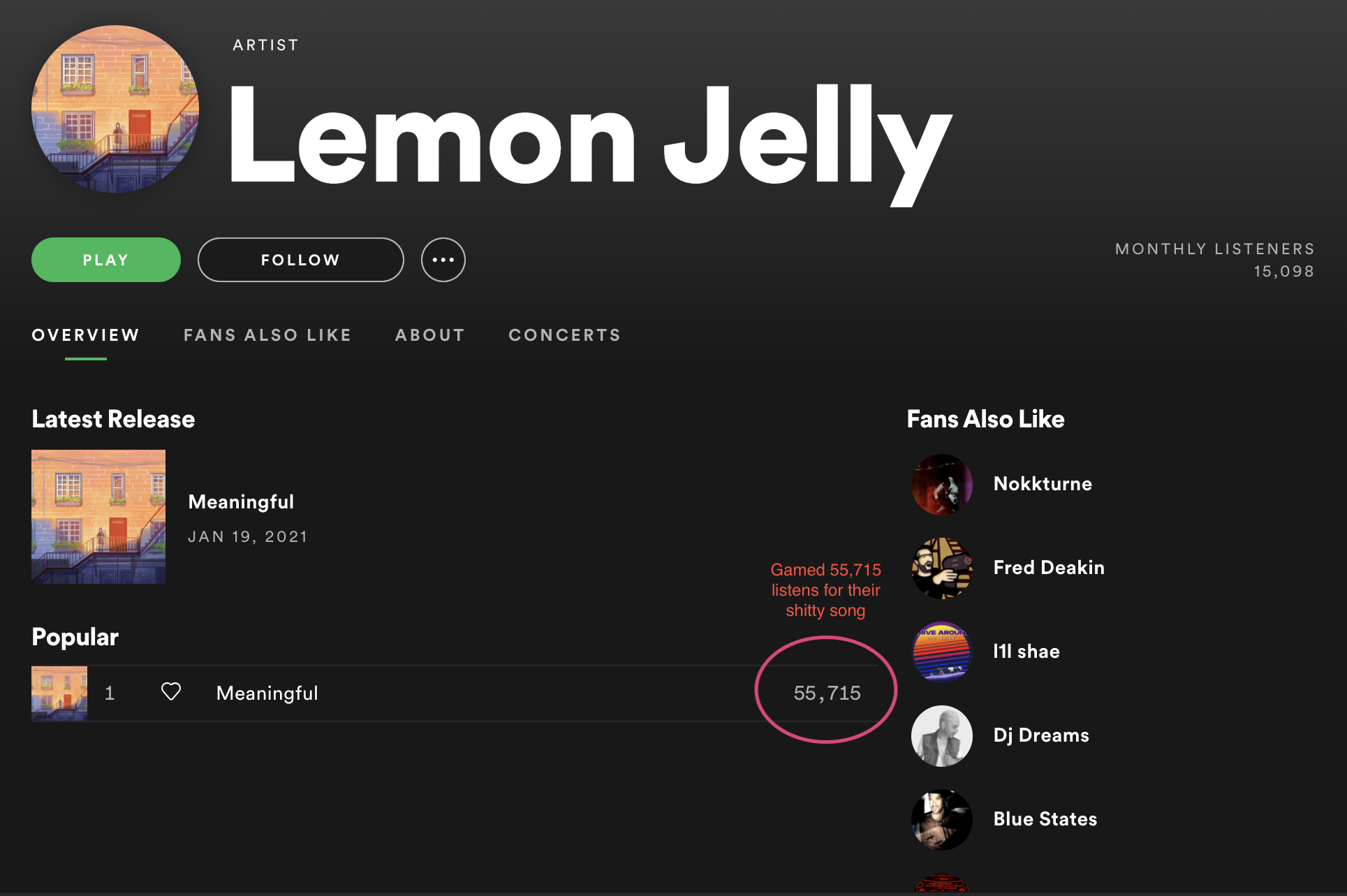 I have the same problem. I made a playlist of these posers. A couple have changed their names, since I added them.

I've tried to block the fake artists by using the Windows 10 app, then using the circle with a line through it option (only available on Win10 Release Radar) and saying "I don't like [artist]".  I've followed this process with a rapper who is going by the name, The Cult, which is the same name of a well-established rock band that I follow.  The next Friday I still get this rapper named The Cult appearing on my Release Radar.  I'm giving it until the end of the month and then I'm cancelling my Premium plan.  I've had enough.  See the attached photo from the mobile Spotify app on my Android phone.  The hoochie is a dead giveaway that it's not actually a single from The Cult. 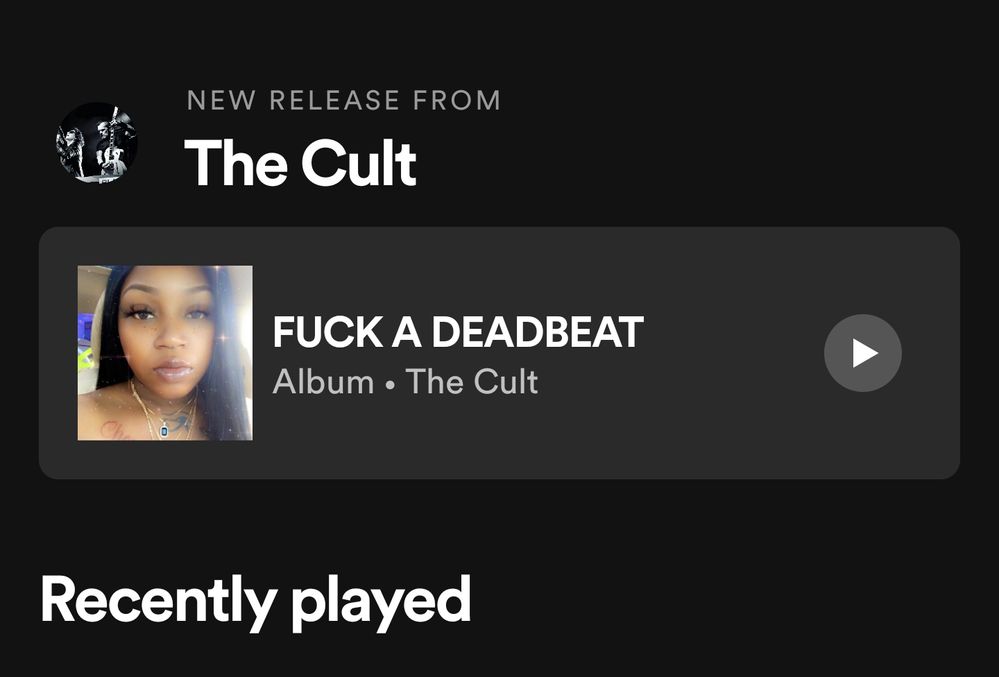 It's interesting that Spotify still has nothing to say on this matter. It's a serious problem.

I'm still getting her C-Rap, too. I just got it, last night. I hope that she and these other rappers learn the "HARDWAY", by getting sued over their name theft.

I just noticed that she has her own, separate profile, so I selected "Don't play this" on it. I hope it stops, now, but I doubt it will, because even the "Hide this song" feature doesn't completely work, so why would the other one work? I have had songs still play on my "Release Radar", even though I "hid" them.

This is a duplicate of this thread: https://community.spotify.com/t5/Your-Library/Release-Radar-includes-wrong-artist-with-same-name-as-...

Please upvote there so we can show how many are having this issue in one place.

Actually the newer thread is the duplicate... but great that this problem is finally getting attention!

This Friday my Release Radar contained 30 songs, and I blocked 11 of them because they are not even close to the kind of artists I follow and several of them are using the names of several legitimate artists I follow. BTW, I've tried blocking artists in Windows 10 using the the red circle with the line through it and select that I don't like the artist. It doesn't work because they just reappear in the following week's Release Radar.  A Spotify moderator has asked for the URIs for some of these fake artists, because it’s apparently too much trouble for the developer to figure out a catalog system and the developers and mods lazy and expect us to do all the work for them. They know exactly what’s going on and are now putting the burden on the paying customer.  But okay, here are two examples.

1) I follow the “real” rock band The Cult (spotify:artist:49DW3KvkyjHO35mK1JnSyS), but I get this fake-The Cult rap garbage in my Release Radar (spotify:album:4jjYHMRl4kEuerq4Pwb2J5)

2) I follow the “real” classic rock band Boston (spotify:artist:29kkCKKGXheHuoO829FxWK), but I get this fake-Boston rap garbage in my Release Radar (spotify:artist:3fpgXf1uFtltFybeqiqQB9)

As far as the other garbage on my Release Radar, none of the following artists have “Fans also like…” artists listed that I recognize. Many of them are in a genre not even close to anything I listen to and several of them are in a language I don’t understand.  I listen to a lot of US and UK punk bands from the 70s and 80, so why am I getting music from these people?

Anyone know another music streaming service that they’ve tried and seems good? I’m now looking to switch from Spotify, taking my Duo Premium plan and moving my parents’ off theirs.  I’m done.