I really miss that song and the remix is very underwhelming. Can you please replace the remix with the original in that album? 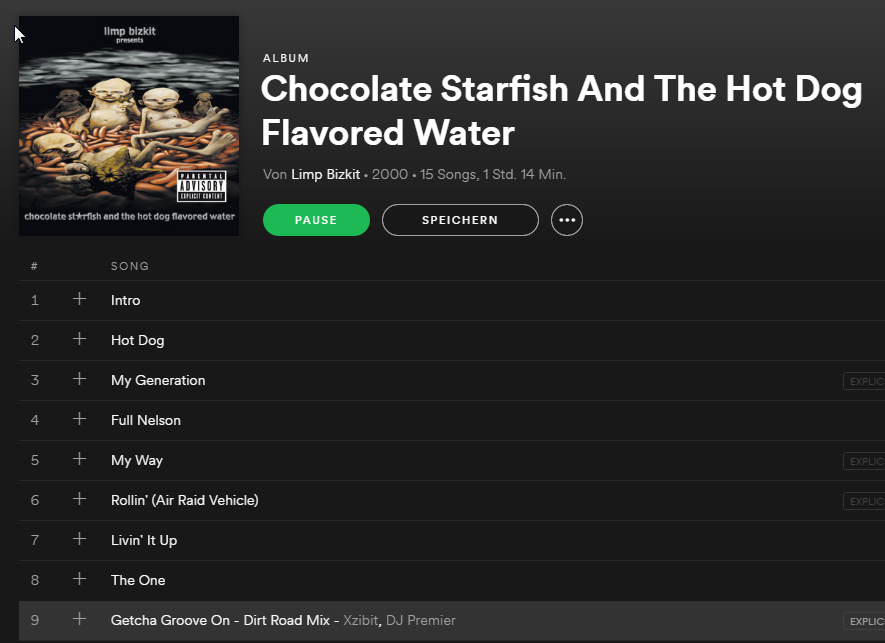 I went to AllMusic, as they list on artist discography pages how many releases there have been with a given release of a band / artist. You can find all the releases of this titled release here from this link: http://www.allmusic.com/album/chocolate-starfish-and-the-hot-dog-flavored-water-mw0000544330/release...

Seems from a wiki page search for the album title, that wiki only shows a remix version of the album available, and is not listing any content with an original track listing pre-remix version available of this release. Could possible be that the original tracks the band did originally is now out of print, and either the band or the label opted to go with remixed versions of this particular track and/or all tracks have been remixed for a later re-release remix version of this release you are looking for. https://en.wikipedia.org/wiki/Chocolate_Starfish_and_the_Hot_Dog_Flavored_Water

I was able to find two releases available to me from that Limp Bizkit titled released from their artist page, I have provided both of them below. You can check the songs out from each release, each release has that song and seems to have different time stamps, might see if there is a difference between the two tracks?

This version is labelled as a 2000 dated release:

This version of the release is dated as a 2008 release:

First of all thanks for the in depth answer.

I checked on AllMusic and you're right there are many releases of that album. BUT all the 2000 releases feature the original song not the remix (as the remix wasn't even produced at that point).

Also as you can clearly see in my first screenshot, i was talking about the 2000 release. I actually don't even see a 2008 release on spotify (maybe it's not available in my country idk)

Now what you said about Wikipedia confused me. I'm not sure if i understood you correctly but wikipedia DOES list the album tracks with the original song and NOT the remix. In fact that's all. I don't see any release on wiki with the DirtRoad mix

this is the original song

this is the remix

As to the spotify links you posted: (now it gets complicated^^) when i scroll through the tracklist here (i mean on this spotify community page on the embedded spotify player) i see both links exactly the same

when i click on them they still have the same tracklisting but in the second one (2008) there are some tracks that are disabled (greyed out) as you can see in my screenshot attached to this reply.

So to make a very long story (i'm sorry for that:)) short:

- There are two different releases for the same album

- Second release in 2008 which contains the remix.

- The version available to me is the 2000 one so it should contain the original but it doesn't and that seems wrong.

Sorry for the walltext. Best regards 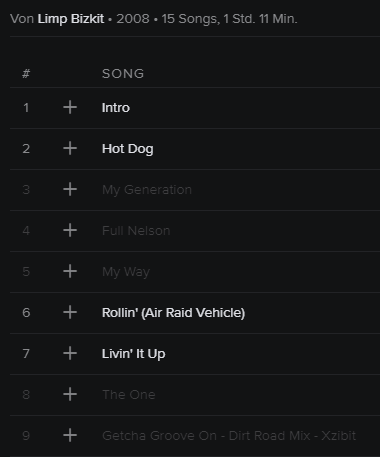 Ah OK I see what you mean now. Not exactly sure why that release available to you with that release year, ended up with a track that was remixed many years later. Seems to be a meta data labelling mistake perhaps with the release you are seeing. Spotify users can report these errors by the information below. I ended up getting some information confused and crossed up when I made my post, my bad.

If you've seen either

- a track or album that isn't playing correctly (i.e. a song only playing one second of music)

Then you can report the error using the Contact Form. Once there, perform the following steps:

Step 1: Click on "I want to report a broken song or wrong song information".
Step 2: Click on the Green Button that reads "I STILL NEED HELP".
Step 3: Copy and Paste the track URI links to the songs into the field that reads "Song URI".
Step 4: Type up a description of the track issues in the "Tell us more" field.
Step 5: Click on the green button "SEND QUESTION".
Be sure to include all Spotify URI's in the body of the message!

ah ok. Thank you very much. I will do that.

I think this song is becoming hard to find because the beat is entirely sampled from an obscure 70's instrumental I heard once on an indie French radio. Never found the track again, probably came out of some very deep crate digging from Lethal (who's getting all the credits for the beat)

Guessing they didn't get clearance before releasing the album thinking they'd get away with it, then sold a gazillion copies and got sued by the copyright owners

I think it got settled out of court possibly with an NDA because no info is available.

Now that all the money is made digitally the label doesn't wanna risk another lawsuit based on this new business model, so they put the remix instead.

This wasn't the first copyright iasue Interscope had to deal with, "My Name Is" by Eminem almost prevented him from releasing the Slim Shady L.P., guess Dre had better lawyers.

I once read a short Wes Borland interview on Kerrang around 2008, when he still had beef with Limp Bizkit and hadn't come back yet. Back then he was still bitter about having been in the most hated band in America, and when asked by a British journalist about his least favourite LB songs, he stated one of them was "Getcha Groove On"

It's been mostly erased from the internet except for one seven string guitar forum but went like this : "We actually got sued over this piece of s***. There was some sort of sample used in it that someone didnt get full clearance for, so we ended up getting into some serious trouble for a little while."

When the interview came out he got mad on Twitter saying he thought he was off mic and got **bleep** by the journalist.

Back then he was frequently arguing online back and forth with Fred Durst through MySpace blogs.

That is very sad to hear. It's one of my very favorit songs of LB. The remix is just **bleep**. Sad that everything good gets ruined by technicalities. Thanks for your detailed answer though.

This is killing me. The original version was SO MUCH BETTER 😭😭😭😭

I used to own this album but lost it a long time ago unfortunately..

I feel your pain. I, too, no longer have my album. Pitfalls of being a irresponsible middle schooler. Well, nothing really changed I guess.

The remix is **bleep**ing terrible.