Downgrading didn't work for me.

What version did you downgrade to?

Media keys still not working in Spotify for me with the following:

I also tried an earlier version that, I cannot remember which one specifically, but it was an early 2018 release.

The following probably only serves to add to the mystery at this point.

I have a laptop with built in media keys that is running Debian Stretch and is on spotify 1.0.96.181.gf6bc1b6b-12 30 stable. Unlike my Ubunut Xenial laptop, it is not encountering any problem with the media keys. (The media keys on the Xenial laptop are on a Logitch K750 keyboard and they are still working with snap version 1.0.89.313.g34a58dea-5 refernced in my prior posts.)

I upgraded to a newer version of the spotify-client this morning. Media keys still don't work. However, they do work as expected for RhythmBox. And, they did work(for several years with no issues) with the linux spotify client.

Here is the version I just upgraded too(via apt):

Let me know if there is any other info that you need from me. Thanks.

The problem for these bizzare key mappings was on my end, for some reason my key mappings were borked.  This did not affect other media players like RhythmBox, Amarok or Clementine, just Spotify.  In KDE, I corrected the mappings found under Global Keyboard Shortcuts / Media Controller and now Spotify is responding to media keys as expected. 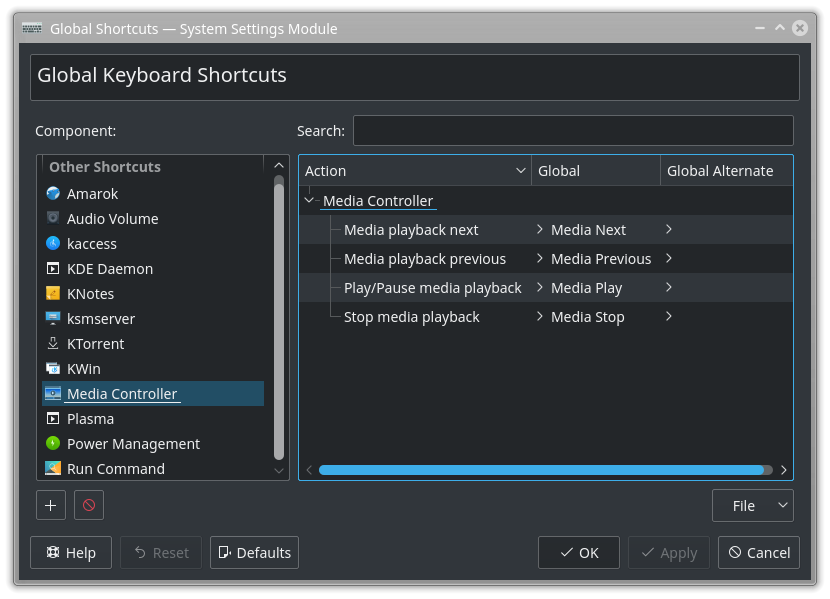 Media keys still have no effect.

I've tried re-assigning the global shortcuts as suggested with no difference.

I spoke to Spotify support again today, just asking for an update on the fix for this.

They claimed to not know anything about the bug! Even though the last person I spoke to told me that their developers were aware of it and were working on a fix. After pointing this out, they resorted back to the 'Linux is not oficially supported' line.

I've been a premium member for years and I *only* use Linux. This issue is really frustrating and now I have no idea when/if it will be sorted.

I'll try contacting support again at a later date - maybe it was just this particular agent.