Since yesterday's update of flatpak version there are now some broken things that always worked in last few years.

1) The app is now opening in top left corner and in a fixed size. After resizing the app and closing the new app size is not remembered.

2) The icon now shows the generic Xorg icon, however upon open and close you can briefly see correct icon

Here are also few links to the github flatpak issue tracker in regards to this:

Also a screenshot of the issue attached. 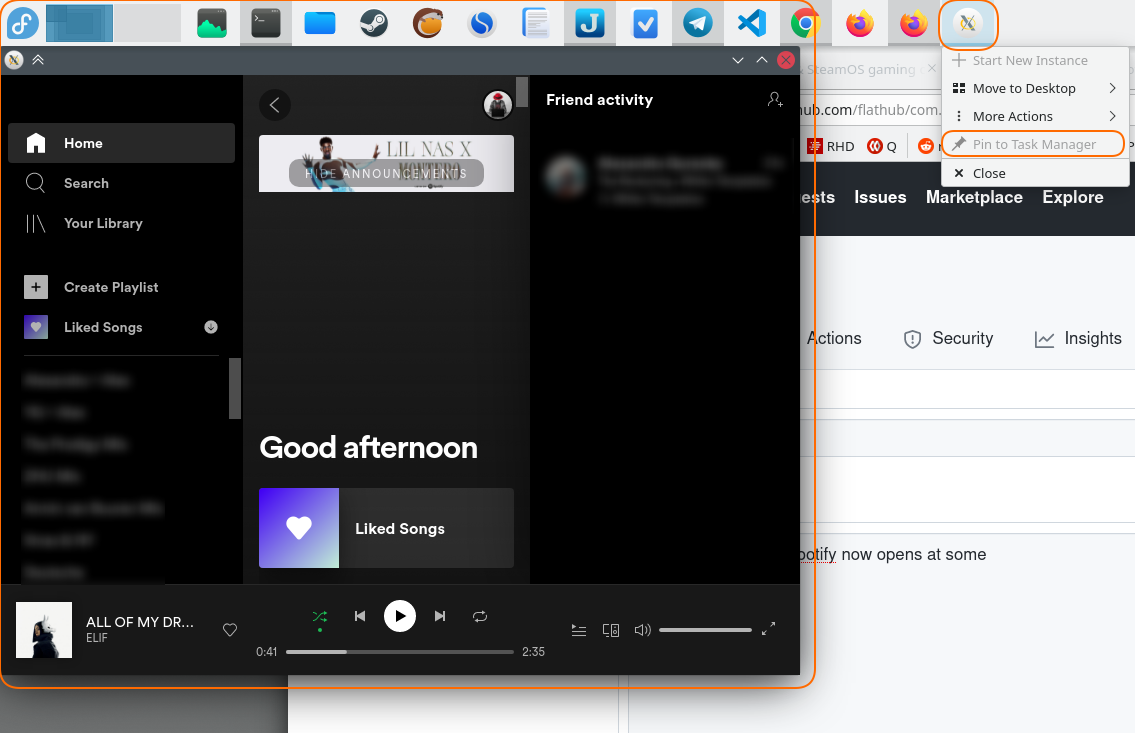 What’s surprising is that the Window Button’s icon is still in place. (although I think it’s also a bit different now and doesn't display artist infos anymore)

When running the application (AUR) via terminal I get the following output:

Some relevant reading for any Spotify developers who may be looking into this:

Since the update I noticed some X properties are missing. It can be the cause of X not remembering the window size, icons and others, as the window manager doesn't know what app it is.

Important properties are missing, such as window name, class...

Same here. I see no icon initially. Sometimes it appears later, but then the title is stuck to an older song. Also the window starts way too small in the top left corner of the screen when I start the application.

With these changes in the xprops, Spotify is quite horribly broken on a lot of Linux desktops. It doesn't even set its own title anymore, neither on startup nor when playing a song. I don't even want to think about how messed up it would be for Wayland users. How did this make it to release? This is a closed-source service that many of us are paying for. We all deserve better.

In the interim, until we get a release of better quality, Flatpak users can roll back to 1.1.55 with these commands. I have selected the commit from *right* before the 1.1.68 update.

This also includes a mask command to exclude it from automatic updates until Spotify fixes their stuff or locks us out. Rolling back to this version causes Spotify's legacy interface to appear for some reason, even though the new interface has been rolled out for a long time. However, it does behave better in regards to WM specs.

Same problem here. Since the window title is not set, many things are broken like position/size management. I've also experienced occasional crashes. I downgraded to the previous Spotify client version.

Yeaa if spotify could give a sh** about this and actually fix it, that'd be great.

Yes, it would be nice to see a fixed version again.

I normally wouldn't complain about such "minor" issues, but considering that we are paying customers and that these issues show a lack of QA for Spotify on Linux, it is a good moment to remind that the Linux desktop userbase is growing and that the teams should start taking things seriously.

Interestingly the Snap release for the same version doesn't seem to be suffering from the same issues:

Great to see a fixed version again! Thanks!

On closing the app, the icon appears briefly.

Broken here too, on Snap and Flatpak.