For the last couple of weeks, I have had an issue with the Spotify Connect feature on desktop. When wanting to sync playback from my PC to my phone or vice versa, it simply does not work. It acts as if I'm logged in to different accounts. This is especially strange because both the web app and my Surface Pro 6 (running the same version of windows) have no issue syncing. Any help would be greatly appreciated

Same happens to me with my google home, I can't block artists either.

Thank you for reaching out to the Community.

This type of issues are usually caused by stored cache in most of the cases. We'd first recommend performing a clean reinstall of the app. This is often an overlooked step, but it’s more thorough than a regular one and can be helpful to get rid of any cache that might be causing trouble.

If the issue persists, would you mind installing the Microsoft Store version of the app to see if it makes any difference? This will give us a better look.

Lastly for @pieee, you can prevent music for a specific artist to be played using your mobile app. You can do this by going to the Artist page > 3-dot menu > Don't play this. The songs for that artist may still show up in recommendations, but the track will be skipped.

Hope this helps. We'll be waiting for your response.

Ive tried both solutions but the problem still remains

Hmm, can you let us know if you're using any type of VPN or school/ work network on your main PC? This can sometimes cause such issues.

Something else you can try is to connect your phone and PC to a mobile hotspot network and check if the apps are in sync. This way you can test if it's a network issue at all.

Keep us posted on how you get on.

Any update? A new thing that started happening is that I now cannot even play songs from search on desktop. This is very dissapointing

Oh sorry I didn't see the prior reply. No, I am not on school wifi or a VPN. Using a mobile hotspot also does not work.

Thanks for your last reply.

If you have any firewalls, or process ending apps/programs installed, we suggest disabling those to test for now and check if this persists when having both devices connected to the same WiFi network. Make sure the proxy settings are set to default.

AndresMModerator
Help others find this answer and click "Accept as Solution".
If you appreciate my answer, maybe give me a Like.
"Music touches us emotionally, where words alone can't." -Henry Thoreau
Reply
0 Likes

1. When switching to home Wi-Fi network (no vpn), desktop app syncs to web app and android app, shows available devices and connects to the one currently in use on the web player and android app. It can control the device momentarily. Without other action, the available devices disappear and the playing switches to local computer only. Sync with Web player and Android app stops. Log out/in (multiple times) does not resolve.

2. Switching to USB phone tethering (phone is on the Wi-Fi home network) after disconnecting from home Wi-Fi results in desktop app syncing to the other devices and showing playing on the device the others are using, then without other action, the available devices disappear and the playing switches to local computer. Sync with Web player and Android app stops.

3. Switching to a different phone, purely running on its mobile network, desktop app does not sync, nor does it show any available devices to connect to.

When connected to VPN, web player and phone app continue to remain functioning as expected.

Very well tested Jason! Hope this makes them look into this again.

I have to say I stopped my subscription and... since then I don't lose my connections anymore. Haven't had it from the moment I lost the "advantages". I hate the adds but prefer them over having to go and reconnect every time.

Thanks for your replies and for the info shared.

In order to continue investigating this further, we'll need as much info as possible. So, if you're experiencing this at the moment, it'd be awesome if you could share with us the following:

Keep us in the loop, we'll be on the lookout!

AlejaRModerator
Help others find this answer and click "Accept as Solution".
If you appreciate an answer, maybe give it a Like.
Reply
0 Likes

So... There's two problems that appeared consecutively that I can only guess they're somewhat related. For starters:

Spotify is refusing to download any files, or at least it says its downloading. For hours. It keeps moving in circles, as if its downloading something, but there's nothing being downloaded (Its added in attachments). So far, I've reinstalled, clean uninstalled and installed, closed VPN, erased all apps from system tray, opened as admin, nothing works.

The second problem appeared at the same time, and it also makes me think it has to be Spotify app. This involves Discord: Whenever I listen to a song, any song, on spotify app, it no longer shows as my Spotify Status on discord. I've tried reinstalling both apps over this, disconnected and reconnected spotify to discord, I've even tried Discord PtB to make sure it might not be my discord. However, if I open Spotify browser, and listen to any song there, it instantly pops up as my status on discord. Same with Spotify phone app, if I listen to literally anything, it pops up on discord status. PC app? Nothing, it even refuses to acknowledge the fact that my phone and browser has spotify open (See Spotify Problem 2 attachment). Moreover, it doesn't sync the song I previously listened to, with both browser and phone app, while the other two have the last listened to song synced. I would contact Discord support, but I think its a Spotify App exclusive problem, something to do with the app on this PC in particular.

Another thing semi-related to problem two: If I try to click on "Play on Spotify" on any song on Discord, it only highlights the Spotify App, but doesn't open anything. Listen Along doesn't do anything either. However, if I have spotify browser open, or iPhone App open, then it instead chooses to play on those alternatives. 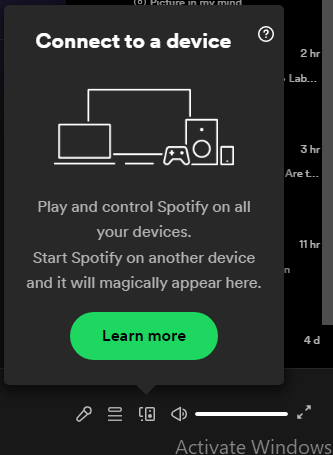 Thanks for posting in the Community.

It's important to make sure you're running a fresh installation of the app, so we can start the troubleshooting from there. Could you perform a clean reinstall of the desktop app as described here?

We're aware of the Spotify activity not showing on Discord as other users have reported this as well, but the reason for that is still unknown. We suspect, that this is most probably related to the particular device setups. Discord is aware of this as well. More on that in this thread.

DianModerator
Help others find this answer and click "Accept as Solution".
If you appreciate an answer, maybe give it a Like.
Reply
0 Likes

Hey @Dian, thanks for replying!

As stated in the post above, I've already done a clean reinstall of the app from that link you mentioned. I think I have the latest version of the app as well? This is what I got just to make sure:

As for the songs download issue on another account, I cannot confirm or deny this as I do not have Spotify Premium on another account. However I made a throwaway account, logged onto it on App, connected it to discord, problem still persists. I logged back into my account, and it still shows my playlists as infinitely downloading, its been days now. That said, I seem to be able to download songs on my iPhone, so problem seems to be native to my app.

I hope the problem I'm facing is directly related to that. There's still a few things making me wonder if my listening status problem is alienated to something being wrong with my spotify app. Because if you look at screenshots attached, you can clearly see my iPhone recognises my Spotify Webplayer, and my Spotify Webplayer seems to recognise my iPhone. But if you look at screenshot from my Spotify App, it seems to think nothing else is logged onto my account, which is clearly not true. Why is that? I can play a song on Webplayer, and switch it to play on iPhone through there, but I can't switch songs to App. I genuinely think that problem, and Discord Status problems are related. 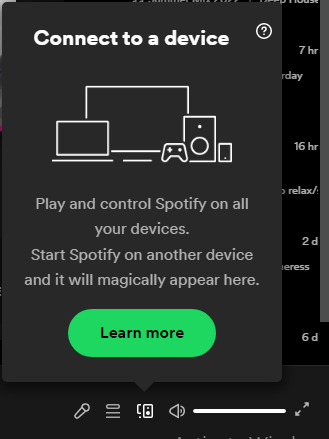 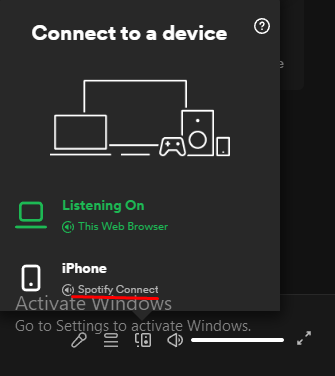 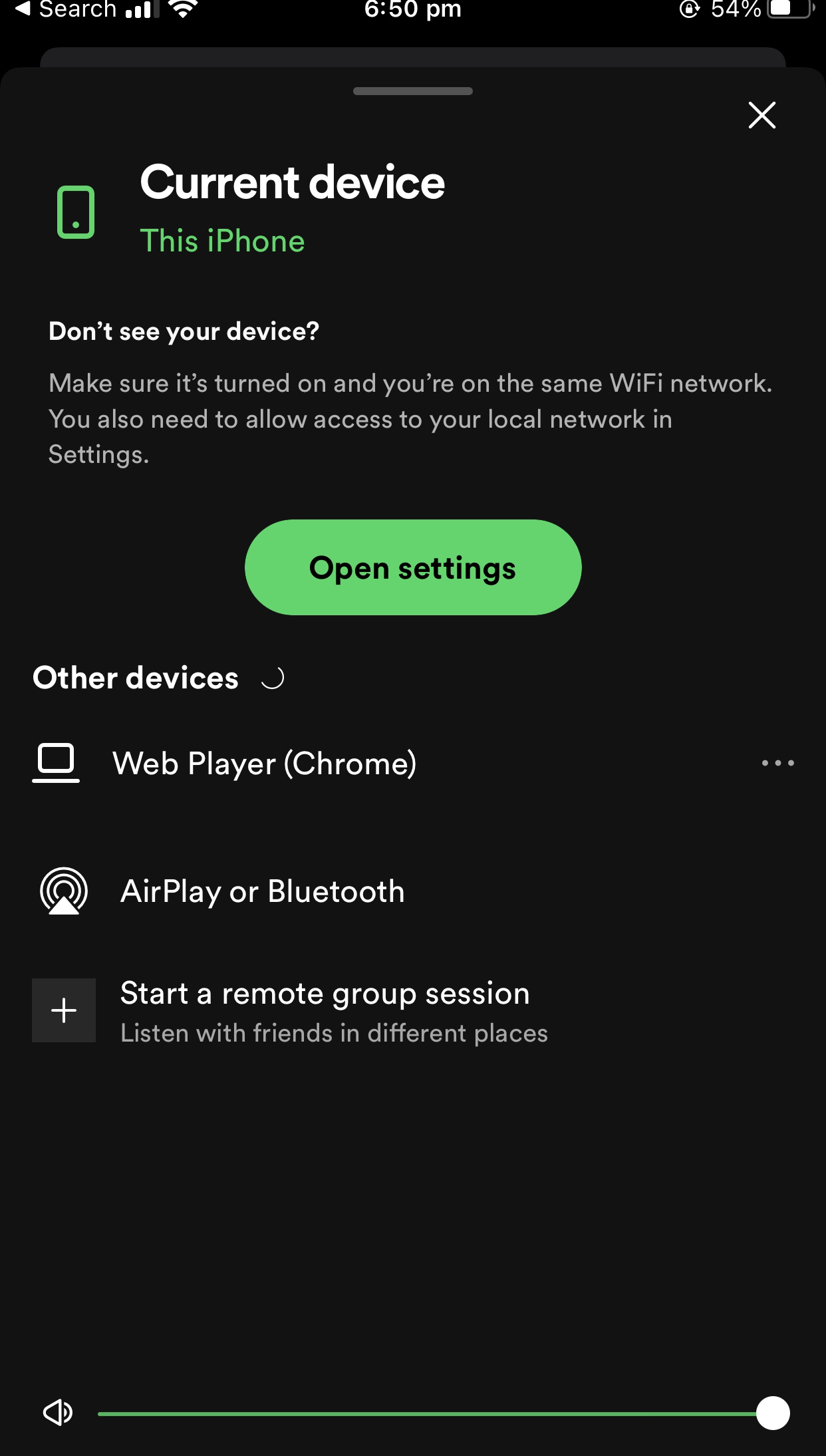 I am having the same issues! My phone and iPad and web browser will all recognize each other, but not the desktop app. I tried logging out and back in, I tried the clean install which lasted for about 12 hours and then it reverted back to not working. Tried another clean install, nothing happened. Tried downloading the Microsoft store version, tried checking the connection via a hotspot. Tried all the steps above, nothing works.

Thanks, had the some problem as OP. The connection (windows-android) was fine with Spotify Web (but i didnt want that). Tried using the Microsoft Store app and it worked.

Just an update, can confirm my problem solved with that as well! Downloading Spotify through Microsoft Store app both fixed my downloading error issue, AND discord status issue. It also now seems to be in sync with other instances of Spotify, like iPhone. Thanks Deepborn!

Did you do a full reinstall, uninstalling the Desktop App and installing the Microsoft Store App? Or did you just download the Microsoft App while the Desktop App was still installed? I tried going straight in without having to re-download all my music and it migrated all my data, but it still seems completely divorced from every other device and connection like Discord Presence / Last.fm

Well, yesterday it was fine and it fixed the problem. I was done with the day, turned off my notebook. Today after startup it´s the same problem again. Microsoft app has the same issue just the like previous (.exe) app. It doesnt see my phone 😞