I have to restart my spotify when I accendently start a song from a search instead of adding it to the queue (happens often to me), would be lovely if there would be a clear button for all the songs added to the queue by spotify it self.

We're happy to announce that we have implemented the Clear queue feature on our mobile app as well. 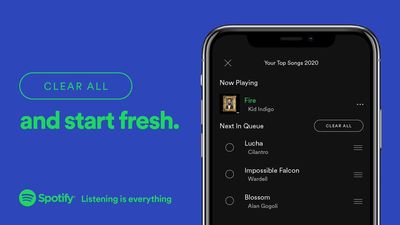 Hey folks, you can now find a 'CLEAR' button on the Play Queue in your Spotify Desktop app.

If using Spotify on your mobile device you can check the songs in 'Up Next' and then select 'REMOVE'.

Thanks for your feedback everyone!

* had to make a new playlist with no content &

* right click on this playlist and select "Choose as current playlist".

So complicated. I wish the right click selection "Delete" was not grayed out when some or all of the Play Queue tracks have been selected.

Step 1: Create a new playlist and leave it blank.

Step 2: Right click it and select "Choose as Current Playlist"

This should clear those pesky grey songs and leave you only with your own queue. Hope this helps!

EDIT: Just noticed its been posted before. Regardless, it works!

We're not after workarounds, or why the queue works as it does.

We want a button on the "Play Queue" page, that says "Clear Queue" that empties everything from the queue.

That's it, it's not exactly complicated...

This suggestion looks like a subset of "Make entire play queue editable":

I have to agree with those who think the play queue setup is a bit strange.  Why should playing a single song from a search populate a playlist that fills the queue with every other song that comes out of the search?  This doesn't even seem to be a useful feature, much less a desired one.  Does anybody like this setup?  The easy fix of course would be a clear way to remove these songs from the queue once there, but that isn't currently an option.  I like that the queue remains populated after a restart of the program (especially that the history remains), so I'm not a proponent of going back to the previous way, when all was cleared.  It seems Spotify wants you to generate playlists (hence the clearing of any songs that you didn't directly add to your queue when playing a playlist).  Yes, there are some nice things about playlists, but most of the time, I just want to add a series of songs or albums that interest me right then.  I'm not going to waste time by making a playlist, then playing it, only to delete it two days later because I don't want to hear those songs together all the time.  It's unecessary time and clutter.  I'm an advocate of spotify being completely queue based.  Double clicking/playing from a search would add a song or album or artist (depending on which you clicked) to the queue.  Playlists would purely store a series of songs.  When you want to play a playlist, its songs would be added to the queue.  There could be a choice to add the list to the beginning or end of the queue to allow for more control.  Additionally, those grouped songs could remain grouped within the actual queue, perhaps indicated by a specific color, and ideally could be removed easily as a group (as well as by individual song of course).  Perhaps there's some functionality of the current setup that I'm just not seeing, and if so, please enlighten me.

After reading all the similar complaints in this thread I'm left wondering if there is anybody at Spotify who gives a toss - do they read these posts? Do they care about their users? - if there is a moderator, and I presume there is ,why doesn't he tell us the reason for this riduculous glitch in the programme? Hello! Hello? Anybody there?

Apparently nobody is there. And it's too bad, because after reliable streaming and a good library, the play queue is the only feature that I want out of a streaming service.

Spotify seems to expect us to make playlists, and use them to control what we're listening to. From other comments, the play queue seems to be some sort of hybrid view of the current playlist.

The only problem is I can't stand making playlists. No matter how much effort I put in to them I never even listen to them once. I listen to albums, one after the other. Playlists are a terrible way to do that. And so is the spotify queuing system.

I couldn't agree more with mrleff! I use playlists primarily to gather together whole Albums on a specific topic (artist, genre, style) and I play albums almost exclusively. About the only use I have for a track-based playlist is when I'm having a party and I let people add to the currently playing list or to one I prepared earlier.

I find the way that the Play Queue works to be very frustrating: why does an item added to the Play Queue by choosing "Play" have a different behaviour to an item that I choose "Queue" for? And why can't I delete items that were added via "Play". GRRRR!!!!

My opinion? Add all items to the Play Queue in "editable mode" and have a "Play Now" option to jump an item to the top of the Play Queue and start it playing.

Please include a clear queue function soon.  It is a simple and basic fuction.